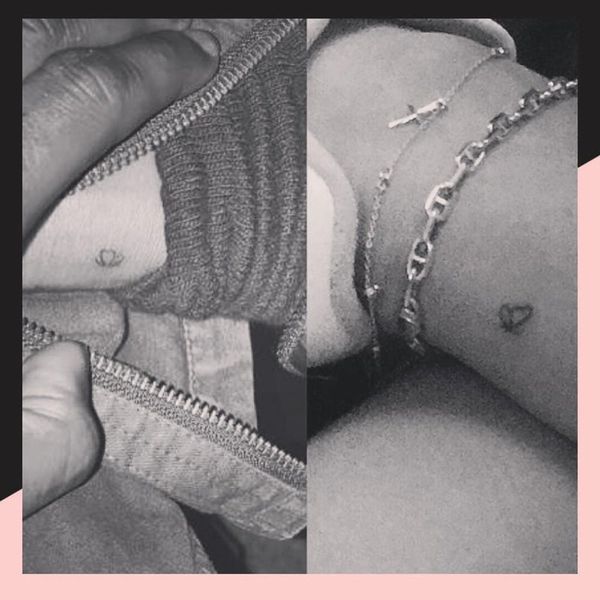 It’s only been a few days since Kylie Jenner gave birth to her first child, but it would appear that the new mom is already showing devotion to her daughter in a very permanent way (aside from this shoe collection that would make Carrie Bradshaw jealous).

congrats to @kyliejenner & @travisscott for your little miracle 🦋 #jonboytattoo

Tattoo artist Jon Boy, who has inked the 20-year-old in the past, posted a black and white photo featuring two teeny tiny butterfly-shaped tattoos. “Congrats to @kyliejenner & @travisscott for your little miracle 🦋,” the artist wrote on Instagram. Both the rapper and the Kylie Cosmetics founder appear to have the matching images on their ankles.

Of course, it didn’t take long for fans to wonder whether the matching butterfly tatts could be a clue to the newborn’s name. One clever fan drew a comparison between the artwork and an apparent Greek word for butterfly — Vanessa — while others took the image more literally, questioning whether the baby’s name will *actually* be Butterfly.

thank you @wttyler for putting this together. here’s a little glimpse of the last 9 months. the link is in my bio ♥️

While the post does not reveal the exact timing that the inking took place, the pic went up four days after the birth, which has many fans convinced that the new mama got inked right after her daughter came into the world. On the other hand, some Insta-sleuths are claiming the whole thing is actually old news: according to one Instagram user, “[the couple] got this tattoo around the time [Scott’s] love galore was released…[in April 2017]” and that the artist is “just reposting the work he did on them.”

…and we thought the conspiracy theories would end once the baby arrived!

Do you think there’s a hidden meaning to Kylie’s and Travis’s butterfly tattoos? Let us know @BritandCo!