15 Frozen Photos That Have Nothing to Do With Elsa 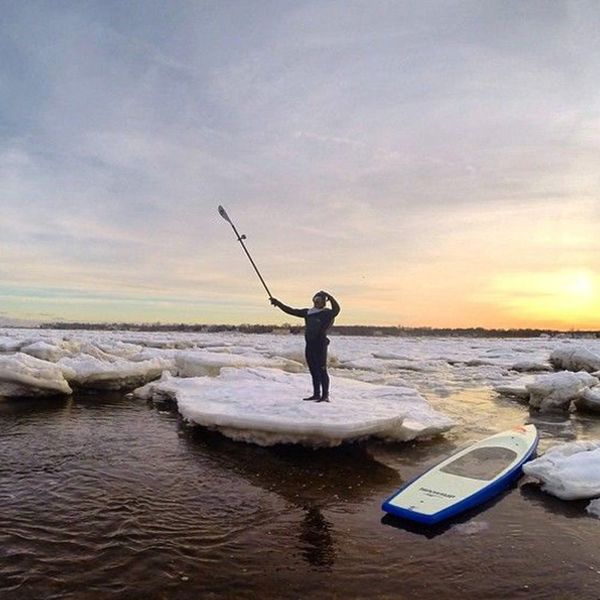 Ice and snow have been slamming much of the United States, and it’s getting way past the point of snowman contests and snowball fights. The freezing state of things has people stranded at home and no doubt going stir crazy. Even Mother Nature herself has been caught frigidly frozen in time. Save your toes from frostbite and catch up on this epic weather through Instagram, with these 15 snow-tastic photos.

1. Niagara Not-So Falls: When we imagine the phrase, “when hell freezes over,” this is kind of what we envision. Kind of gorgeous though, no? (via @nikki_crouse)

2. Snow Day: Dogs are always wearing fur coats, so it makes sense that most of them are loving this icy terrain. They like to play in it and eat it. (via @dragonwingss)

3. Reluctant Pug: This pup, on the other hand, doesn’t look like he’s amused by the snow whatsoever. Probably because he’s in Texas, and he’s thinking, “I didn’t move to Texas for this white stuff.” (via @dkk5685)

4. Leaf-cicles: Frozen rain made for perfect molds of leaves. We kind of want to turn them into jewelry or mobiles. (via @weatherchannel)

5. Polar Plunge: We don’t suggest hitting the beaches of the Northeast right now. There’s no lifeguard on watch, and that’s not sand — it’s snow. (via @kerrycapecod)

6. Ice Paddle Boarding: Oh, this must be Alaska or something, right? Wrong. It’s New Jersey. Alert the media, because there are icebergs in the garden state. (via @carterhmccoy)

7. Really Chill Waves: In Nantucket, they’re calling this the “Slurpee Swell.” The icy waves were rolling in slow motion, making it super convenient to capture epic pics… but not so great for surfing. (via @surfersvillage)

8. Chill Grill: This looks like an art installation, but it’s in fact the icy replica of an SUV that no doubt had some trouble backing out of its parking space. This is one time when that ice scraper really won’t do you any good. (via @weatherchannel)

9. Reservoir at Central Park: Looking at this, it’s hard to imagine that in the spring, this tourist haven will be full of paddle boats and picnics — really hard to imagine. (via @aslan_nyc)

10. Japanese Gardens at Duke Farms: In New Jersey, this Japanese Garden can totally pull off the whole snow-chic look. Who knew that a springy shade of pink could look so wintry? (via @natgeo)

11. Snowcream: This is definitely one of the more delicious results of so much fresh, powdery snow. A little snow and a little cream make for a delicious treat straight from Mother Nature. (via @lindzieloo)

12. Frosty Fountain: In Manhattan, you kind of expect to see the nicer parts of town decked out in metaphorical ice, but not literal ice. (via @dkukin)

13. Brrrooklyn Bridge: On first glance, this looks more like a gloomy scene from the bridges of London instead of the high point of this hipster borough. (via @gingercmp)

14. Icicle Barricade: Here’s hoping that there’s a significant amount of insulation between this wall of ice and the walls inside this house. Also, here’s hoping they have plenty of hot toddies keeping them warm inside. (via @jm_pelland)

15. #SoMuchSnow: Like we said, the best snow photos are on Instagram. Bundle up and get your scroll on! (via @newyorkermag)

Is it snowing where you live? Share your photos with us!

Katelan Cunningham
Katelan is a tech junkie obsessing over all things startup and design. She has entirely way too many apps on her phone and is no stranger to binge-watching. She accidentally fell in love in Los Angeles and that’s where she currently lives, writes, tweets and grams.
Instagram Roundup
Party
Instagram Roundup Photography Winter