This Mammoth Proposal Story Will Give You *All* the Feels 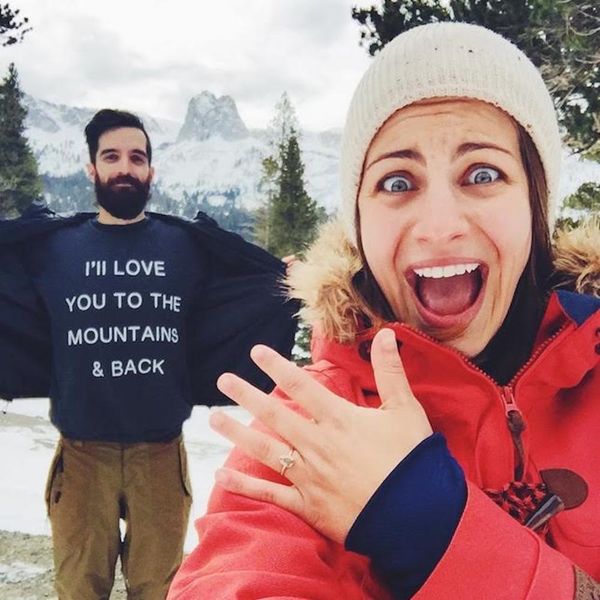 With spring weddings fast approaching, it’s easy for couples to get swept up in all the business of wedding planning and forget those precious moments that led to them to where they are. You deserve to take a break from all the bustle of your bridal duties and indulge in a sweet proposal story or two to remember what’s really important — how it all began! We’ve shown you a breath-taking Iceland proposal and a wedding planner’s proposal, but now we’re heading to the slopes to kick things off, snowbunny style. Amber and Alex’s Instagram-worthy mountain proposal story is just the thing to make you awwww. Read on for details about this super sweet moment that will seriously warm your heart.

As frequenters of Mammoth Lakes and Mammoth Mountain, CA, Amber and Alex decided to go for a ski and outdoor adventure weekend in early January. On their first day there they checked into their Airbnb, got their snow gear on and headed up to the snowshoeing trails beginning at the Tamarack Lodge. After about an hour of snowshoeing, they went up a little side trail to a lookout point to snap some photos of Crystal Crag. While Amber was trying to get the perfect panorama shot, Alex secretly set up a camera to film the whole thing and took off his jacket. When she turned around to show him the pictures, he was walking toward her with a small, hand-carved wooden box in his hand, wearing a sweatshirt that said “I’ll love you to the mountains and back.”

In that moment, as Alex walked toward her with the box in hand, Amber’s initial reaction was to freeze and savor every second of what was happening. As soon as he dropped to one knee she started sputtering, “Yes! Yes! Of course, yes!” as he tried to ask her. In short, she felt “overwhelmed with happiness and excitement to even make it to tears of joy.” After that there was a ton of hugging and smooching, and of course a million questions about how he kept the ring so well hidden for the year he was holding onto it.

As to whether she was surprised, Amber admitted that the whole trip seemed a little out of the blue and a little extra fancy, especially because he was being too quiet about talking details of the trip. However, in the end, in her words, “It was the perfect proposal,” and they were able to enjoy the whole weekend with one another before sharing the news with their friends and family.

Though they have yet to pick a date, they are planning for October 2017. Because Amber’s cookbook Homestyle Vegan: Easy Everyday Plant-Based Recipes is coming out this November, they’re anticipating it’ll be too busy for a wedding this fall. Get in on the magic now and pre-order her cookbook!

Are you thinking about your own sweet proposal? Check us out on Pinterest for more wedding ideas and stories!

Grace Lee
Grace is an LA-based freelance writer, documenting her everyday life via her Instagram. She's a fan of spontaneity, individual style, all things Harry Potter, cuddling with her two dogs, and exploring new places. More about Grace can be found on her blog, Girl Meets World.
Engagement
Wedding Planning and Decor
Engagement