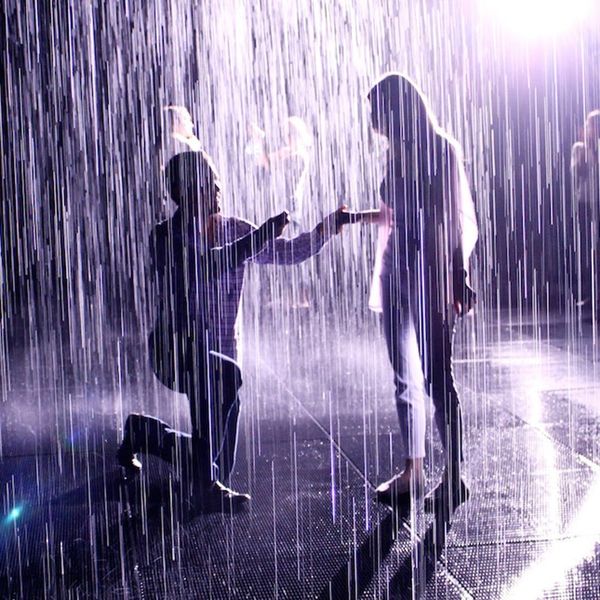 There’s nothing like a sweet engagement story to make your day or even get you excited for your very own some day. Next up on the list of creative proposals? This insta-worthy proposal that looks like it’s straight out of that steamy scene in The Notebook. It all began when Melissa took a chance and put her number in Sean’s phone one night after a chance encounter on the Sunset Strip. Months later they became official, and eventually moved in together in a Los Angeles apartment within walking distance from LACMA (Los Angeles County Museum of Art), where the epic proposal occurred. Scroll on for all the rain-filled and romantic deets!

When Melissa heard that the Rain Room exhibit by Random International would be opening in the fall, she knew they had to buy tickets ASAP, since the exhibit in NYC had lines waiting for over eight hours to get in. The in-demand exhibit features rain falling from the ceiling, which stops above you when its sensors detect that someone is walking underneath.

When it finally came time to go, they made their way to the exhibit while talking about that night’s birthday dinner plans for Sean’s business partner. After waiting in line, it was their turn to walk through the exhibit, and they took a couple of individual photos until Sean asked someone to take a photo of the two of them. He then joined Melissa under the rain, held her hand and said, “Let’s turn towards the camera for a minute.” When she turned, he dropped down on one knee and asked, “Will you marry me?” Because Sean would always jokingly start to get down on one knee or tease that Melissa should propose to him with a “man-gagement ring” (we’d love to have seen that), at first Melissa thought he was joking around with her again. But she realized he was serious when she saw the ring, and soon enough both of them had tears in their eyes. Amidst the cheers and clapping from other museum visitors, Melissa felt she “was in a dream world the rest of the afternoon.”

Many hugs and kisses later, the two privately celebrated their new engagement with a glass of champagne at the museum’s restaurant. They then made their way to the “birthday dinner,” which Sean revealed was a dinner reservation for the two of them at their favorite steakhouse, which was coincidentally where they spent one of their first dates. Afterwards, they revisited the bar where they first met with an entourage of all their closest friends.

Though a date has yet to be set, they hope for a wedding sometime in 2017 or early 2018. Congrats to Melissa and Sean!

Grace Lee
Grace is an LA-based freelance writer, documenting her everyday life via her Instagram. She's a fan of spontaneity, individual style, all things Harry Potter, cuddling with her two dogs, and exploring new places. More about Grace can be found on her blog, Girl Meets World.
Engagement
Wedding Planning and Decor
Engagement
More From Wedding Planning and Decor