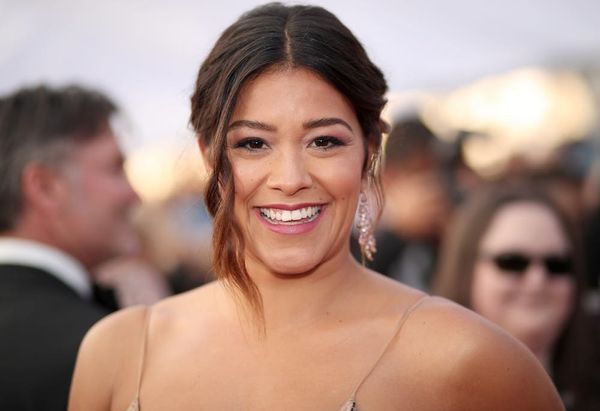 If you were a kid in the 1980s or ’90s, you probably remember playing the educational Carmen Sandiego computer games or watching the subsequent TV shows. At the very least, you heard the theme song somewhere. And you’re about to hear it — or a version of it — again, thanks to Netflix’s animated reboot Carmen Sandiego, which debuted on January 18 and features the voice of Jane the Virgin star Gina Rodriguez.

Like so many of us, Rodriguez grew up admiring the International Woman of Mystery. After all, she’s a strong Latina, a criminal mastermind, and the CEO of her own company, V.I.L.E. And according to Netflix’s study of “The Carmen Effect,” which analyzed 300,000 tweets about the character, people all over the world view her as a trailblazer and a cultural (and style) icon.

“Growing up I really looked up to Carmen for her fearlessness and didn’t want to miss this opportunity to share a new take on Carmen for a new generation,” Rodriguez recently told Brit + Co. “I was excited to show the Netflix audience a different kind of villain.” Read on for more from our interview with the actress about her exciting new role and how Carmen continues to inspire her as an adult.

Brit + Co: What made you want to take on this iconic role?

Gina Rodriguez: One thing that is so beautiful about Carmen’s story is that she was taught one way of living; however, when she was capable of learning other aspects of the world, she realized that her upbringing was not the way that she wanted to be. She didn’t want to be a thief. She didn’t want to steal from people that couldn’t afford it. I love being a part of that new narrative for her.

B+C: Were you a big fan of Carmen Sandiego as a kid?

GR: Yes! In fact, my first memories of Carmen Sandiego are with my sister Rebecca, who absolutely loved the video game, and my eldest sister, who loved the game show. I definitely was more partial to the game show, because I always wanted to be on it. Carmen was an incredible, strong, feminist, badass Latina who was going around the world, experiencing new cultures, and learning new languages. I wanted to be just like her.

B+C: Why do you think Carmen is a good role model for young kids?

GR: Carmen will be a positive reflection for so many young Latinx girls and boys but also for the world at large, because we are all just human beings at the end of the day. I think it’s important for all kids to have a role model who is intelligent, fearless, and strong — all characteristics of Carmen. It’s inspiring to see a woman just be a human being. … She has strong desire for growth, which is important for all kids to see in a role model. This desire ultimately was what took her to the other side of the world. It was what made her unafraid to jump into a culture she didn’t know, to learn a language that she didn’t know, and to expand her mind. Even I’m hoping to learn more and more from her every day.

B+C: What are some exciting things we can look forward to seeing Carmen do this season?

GR: I’m most excited for the world to see Carmen’s origin story. I was really proud of the way it was crafted. You’re also going to see some new characters that help Carmen on her journey, and of course some additional V.I.L.E. villains.

B+C: Has doing the show made you better at geography?

GR: I definitely learned a thing or two from the new series. However, overall, Carmen has inspired me to travel. I grew up in Chicago in a lower income Puerto Rican family, and traveling wasn’t very common in our family, only because a lot of what my parents did was save for my education. They often told me that one day I was going to be able to take myself around the world, and they were right. I would see Carmen traveling to places like China, Panama, and the Galapagos, and that wasn’t obtainable when I was young, but I got to fantasize and I got to live and see the world through Carmen. I want this new generation to get inspired by the show and know that hard work, perseverance, and ambition will give them the opportunity to accomplish their travel goals and ambitions.

Meredith Lepore
Meredith is a freelance writer/editor who writes for Levo League, Bustle, Refinery 29, Instyle.com as well as magazines including Marie Claire, SELF, Women's Health and Cosmopolitan. Before going freelance she was Editor in Chief of the women's career site The Grindstone. She earned her Masters in Magazine, Newspaper and Online Journalism from the Newhouse School at Syracuse University. Meredith resides in New York full time and enjoys SoulCycle, jogging and playing with her Yorkshire Terrier Otis, who also loves SoulCycle.
Netflix
Streaming
Netflix Nostalgia Streaming TV
More From Streaming