Quiz: Can You Name These Famous Album Covers Imposed Into Street View? 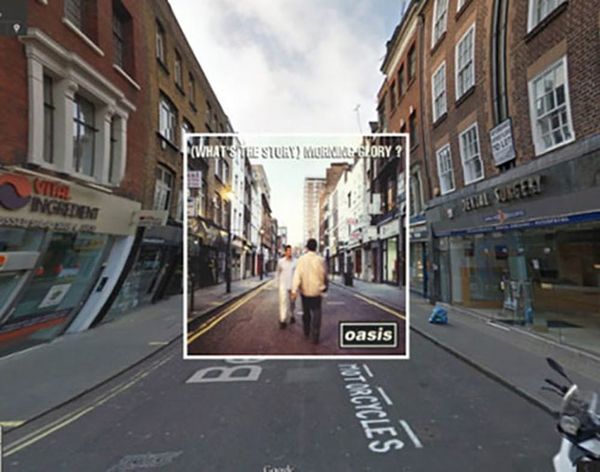 Some of the most iconic album cover photos of all time have shuffled straight off of your iPod and back into the scene on the streets where they were first snapped. That’s all thanks to the Google Street View gurus at London’s The Guardian who created a new series of visual mashups that revisit the modern day locations immortalized on classic album art. The images are a bit of a cultural time warp, like brief four-cornered views into the past. Read on to check out just how much the scenes have changed since Bob Dylan strutted down an Earlybird-filtered New York street in 1963 or Eminem chilled on a grainy stoop near 8 Mile Road in 2000.

(What’s the Story) Morning Glory by Oasis: The cover of ‘90s Britpop album famous for its smash single Wonderwall was shot in the heart of London’s Soho in the midst of bustling record shops. Now the streets are a bit bleaker, probably mourning the loss of Liam Gallagher’s pageboy locks.

The Freewheelin’ Bob Dylan by Bob Dylan: How badly do we want to turn this iconic ‘60s album photo of a young Bob Dylan cuddling up to his then gf in NYC into an Oscars-style “then and now” pic? SO BADLY! Photoshop pros, you have been challenged!

The Marshall Mathers LP by Eminem: You’d never know how lush the surrounding Detroit streets were from this spooky photo of the bleached blonde rapper sittin’ on the steps of his childhood home in 2000, which has since been demolished.

Abbey Road by the Beatles: The most famous crosswalk in all of rock ‘n’ roll has endured almost constant upkeep since it was featured on the cover of the Beatles’ last recorded studio album in 1969, and so the pristine white stripes beckon Fab Four fans to stride across the street 45 years later. It’s a scene still worthy of a binge trip.

These virtual collages are the third in a series that Halley Docherty has made that juxtapose famous images over Google Street View. His previous set that dropped classic paintings of world cities into their present day panoramic settings is seriously jaw-dropping. Needless to say, we can’t wait to see what “then and now” series Docherty schemes next. Perhaps he’ll take it to the next level with a “now and later” angle and replace international landmarks with their own 3D printed replicas? Sigh. We can dream.

What then and now series are you squealing over? Tell us in the comments below.