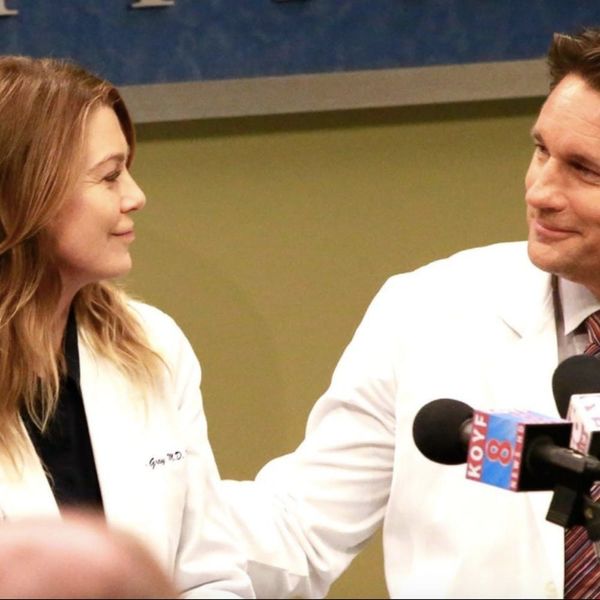 Well, at least we started the episode on a good note.

After the whole “let’s talk about our feelings by almost dying and also helping people survive on a plane” incident, Meredith is now trying to figure out how to do the impossible: tell her sister Maggie about her and Riggs, knowing Maggie has a crush on him. Alex tries to comfort her, and side note, I don’t care that Meredith and Alex are the only two residents left from the original cast — I love their friendship and would take an entire episode of them in a car giving advice to each other. At the hospital, Maggie barges in on Meredith as she’s practicing her “so I’m with the guy you like” speech, thinking Meredith is nervous about the press conference that’s being held to talk about what happened on the plane. Unfortunately, Meredith doesn’t get a chance to talk to Maggie before she’s rushed off in front of the press…with Riggs. And proud sister Maggie is videoing the whole thing, at least until Riggs warmly suggests Meredith is the real hero of the story, and puts a hand on her shoulder, and, well…you get the idea. Maggie’s not dumb. And obviously, she’s pissed.

She watches the video over and over again in the OR (Jackson asking “did I miss something?” and referring to the press conference is amazing) and ignores Meredith’s calls. When Meredith finally does talk to her, she’s cold and biting, and totally caustic. She interrupts Meredith and Alex at lunch to bluntly ask Meredith how many people knew before she did (she doesn’t believe no one else knew) and if she joined the Mile High Club. Seriously, Meredith is so over this drama. The girl’s been through worse. When Maggie steals an OR from Meredith, it’s the last straw, and they have an infamous sister talk in one of the storage rooms. Maggie feels like she’s been betrayed and lied to, because Meredith is all she has left now that her mom is gone, and Meredith tells her she got together with Riggs before she knew Maggie liked him. It takes awhile, but Maggie comes around, in part because Meredith finally tells her that she’s not losing her sister over a guy. I mean, there’s still progress to be made, but they did go out with Amelia for a girl’s night so it’s a start.

"But you're my sister and I'm sure as hell not losing you over a guy." ❤️❤️❤️ #GreysAnatomy pic.twitter.com/bIufNpScHr

In medical news, and in what might be the grossest thing Grey’s has ever done (look, I’ve been watching for 14 years, so this is saying a LOT), a girl is admitted because she’s having stomach pains. Turns out she doesn’t just have stomach pains…she has worms. Yeah. Actual worms swimming around in her stomach. And here I am trying to eat dinner during this show. The worm girl is Mary and her overbearing, constantly pet naming boyfriend is Dennis, and they make everyone roll their eyes before they even get to the worm part. He ends up bolting when they start talking about all the worm stuff, which, hey…I guess he’s not gonna do well with childbirth, huh?

"Your patient threw up worms?" -Bailey

The other big medical case is a pregnant woman named Veronica who is battling cancer. Alex finds out she has a tumor on her spine, giving her at most 2-3 months to live. They elect to have her give birth now, because at least it gives her time to be a mother, and she’s almost to term anyway. The baby is born healthy, hooray! But Veronica doesn’t make it through surgery, because Grey’s can’t give us one happy moment. Unbenowsknt to her husband, she signs a DNR before surgery and when she takes a turn, she elects to die quietly on the table. At least Mary makes it out okay…boyfriend included. Yes, Dennis returns and apologizes and they’re back to their gushy selves in seconds.

Meanwhile, Bailey notices that Catherine and Webber aren’t sitting together at the press conference and gets worried about them. Her husband talks her out of prying, and so she asks April for help. April gives her some advice, and Bailey talks to Catherine, because she feels like she’s the cause of their issues. After April tells Bailey that her and Catherine are more alike than they realize, Bailey finally goes to talk to Catherine, putting her foot down about dating someone like Richard and about her past mistakes. And it works! Catherine reaches out to him, and they even bond again over pictures of the worms. See, the worms were good for something!