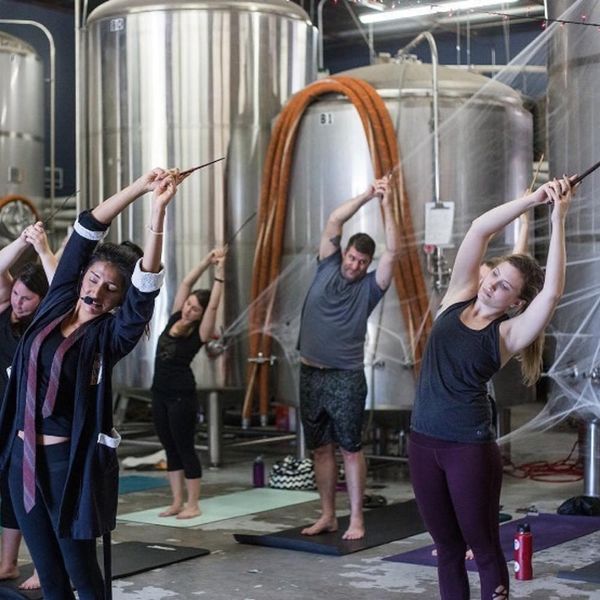 If you’re into exercise and enchantment, stretching and spells, then do we have just the thing for you. It’s time to pop your athletic wear on with a robe on top and grab your most flexible wand, because Harry Potter yoga now exists.

The brainchild of two bendy sisters, Isabel Beltran and Ximena Larkin, the October 30 event saw 34 witch and wizard-wannabees set down their mats at the Circle Brewing Co. (where Isabel’s boyfriend is the co-founder) and attempt poses that included Slytherin cobra postures, Downward Fluffy and casting Patronuses to ward off dementors.

“I was reflecting on Harry Potter because Halloween night is the night his parents died and I thought it would be interesting to do something around Harry Potter, Halloween and death (from our culture’s perspective),” Ximena told Bustle. “We’re Mexican and celebrate the Day of the Dead. It’s not morbid, but rather a celebration of life (of other’s as well as our own). I’m the bigger Harry Potter fan between the two of us and the series (especially the last book) is something that changed my perspective on death.”

Getting psyched for some Harry Potter-themed yoga this Sunday @circlebrew Don't worry, your chosen wands have already arrived✨Make sure you've got your tix 🎟 we've got 3 spots left! More event info in bio. Check it🔮

The yoga class did its best to incorporate this ideal as it led participants to balance along with their broomsticks, transform into McGonagall-like cat poses and even drape on invisibility cloaks (aka blankets) while The Tale of Three Brothers from Harry Potter and the Deathly Hallows was read aloud and led into a savasana (also known as a corpse pose).

The class was concluded with Dumbledore’s words to Harry: “Do not pity the dead, Harry. Pity the living, and, above all, those who live without love.”

Would you love to attend a Harry Potter yoga class? Tweet us @BritandCo!

Desiree O
Desirée O is a ‘Professional Bohemian’ who loves anything and everything related to the arts, entertainment, and pop culture. She ADORES being a ‘Newsy’ for Brit + Co, covering all of the latest tidbits of awesomeness that you want to read about. When she’s not writing, she’s either making messy art, going on long adventurous walks with her camera, or poking around over at bohemianizm (http://www.bohemianizm.com/). You can find out about Desirée O and her work at http://DesireeO.com/ or follow her on Twitter @DesireeO.
Halloween
Pop Culture
Halloween Harry Potter Yoga