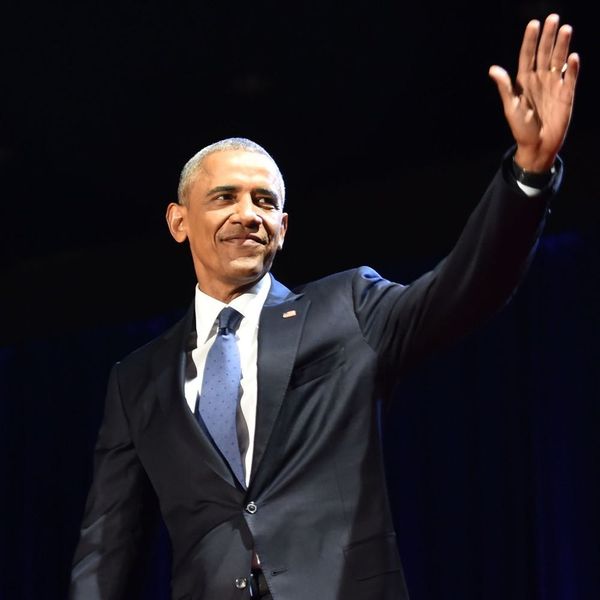 Following a swinging farewell party that had Hollywood’s finest up until the wee hours, President Obama addressed the nation one last time in his final speech as Commander-in-Chief (here’s the full transcript, in case you missed it).

His heartfelt message had many (himself, daughter Malia and wife Michelle included) in tears as he thanked his family, Joe Biden and the nation, and urged us all to come together and honor the democratic system that makes our nation so great. “Democracy does require a basic sense of solidarity — the idea that for all our outward differences, we are all in this together; that we rise or fall as one,” he said.

While he did address the challenges we will face together in the years ahead — including race relations, climate change and economic trade — we were left feeling largely… hopeful? After all, as he pointed out, there’s much we can do, including our favorite reminder: “If you’re tired of arguing with strangers on the internet, try to talk with one in real life.”

We hear you, sir: loud and clear. Celebs were all ears as well, as they flocked to social media to pay their respects to our nation’s leader — see what they had to say below!

2. Ariana Grande: Ariana let the pic do the talking, sharing a sweet photo of Obama and Michelle with crying and waving emojis.

Thank you for your service, grace and inspiration, @potus and @flotus.

3. Alyssa Milano: Alyssa followed suit, sharing a stunning black and white shot of the President and his First Lady, writing, “Thank you for your service, grace and inspiration @potus and @flotus.”

First time I met the incredible President Barack Obama, we bonded over our Chi Town roots. He said "You're from Chicago?" Evidence shows, I screamed "Hell YEAH". You served us well Mr. President. #farewell (mean comments go somewhere with your hate, you will be blocked, don't steal my joy)

5. Gina Rodriguez: Gina shared a more personal story, writing, “First time I met the incredible President Barack Obama, we bonded over our Chi Town roots. He said, ‘You’re from Chicago?’ Evidence shows I screamed ‘Hell YEAH.’ You served us well Mr. President. #farewell,” before adding a disclaimer: “Mean comments go somewhere with your hate, you will be blocked, don’t steal my joy.”

.@POTUS @BarackObama I love you more than I have space on Twitter to describe. #ObamaFarewell

7. Ellen DeGeneres: Ellen couldn’t quite keep it to 140 characters.

Regram @flagranchsanctuary : Self-government. Self. Government. Self comes first. We overlook this. Vigilance, not fear. The horses live this everyday. Citizen. The most important office in America. Our power is inside, not outside. As in the herd, everyone has a role, no greater, no less. Response-ability. Wake up. Stand up. Live. Your part." 🙏🏻 #obamafarewell

8. Beth Behrs: Regramming the words of @flagranchsanctuary, Beth said “Self-government. Self. Government. Self comes first. We overlook this. Vigilance, not fear. The horses live this everyday. Citizen. The most important office in America. Our power is inside, not outside. As in the herd, everyone has a role, no greater, no less. Respons-ability. Wake up. Stand up. Live. Your part.”

9. Kerry Washington: Kerry kept it positive, agreeing with Obama’s slogan that “YES WE CAN.”

.@tomhanks reacts to Pres. Obama's speech: "He's ending the way he started—with that fabulous message of yes we can" https://t.co/VmaW47ESHI pic.twitter.com/FM91PaTZ9Z

President Obama, because of you "those brown kids" know that they too can one day be President of the U.S. #ObamaAndKids #ObamaFarewell pic.twitter.com/MhKQc0kxXe

12. Elizabeth Banks: Elizabeth (who starred in this pro-Hillary video prior to the election) also kept it short and sweet, saying “#Goals 100 #thankyou #obama.”

What was your favorite part of Obama’s speech? Share with us @BritandCo.

Nicole Briese
Nicole is the weekend editor for Brit + Co who loves bringing you all the latest buzz. When she's not busy typing away into the wee hours, you can usually find her canoodling with her fur babies, rooting around in a bookstore, or rocking out at a concert of some sort (Guns N' Roses forever!). Check out all her latest musings and past work at nicolebjean.com.
Instagram Roundup
Politics
Instagram Roundup Politics social media twitter
More From Politics