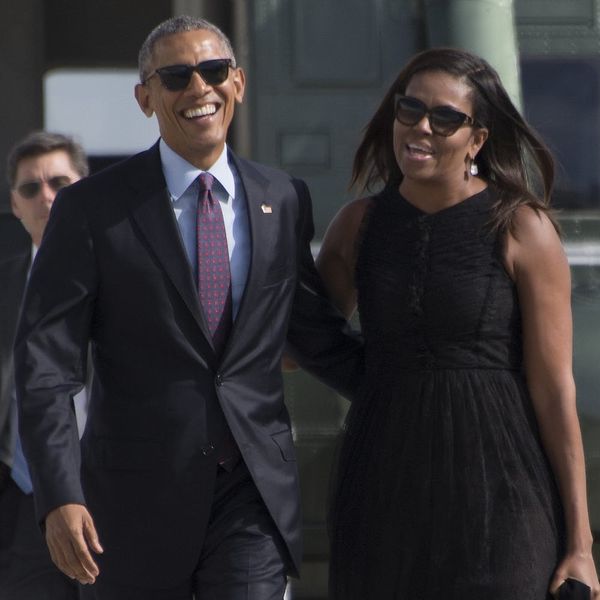 While Donald Trump struggles to get celebrities to perform at his fast-approaching inauguration on January 20 (sans the Rockettes, who might not have a choice), President Obama and First Lady Michelle, who threw the bash to end all bashes Friday night (paid for out of their very own pockets, according to E!), couldn’t keep them away!

Everyone from Chris Rock to SJP and Anna Wintour was on hand to wish the First Family so long following Michelle’s last speech as FLOTUS — even Oprah was there, so you KNOW it was legit. Take a peek below at some of the behind-the-scenes shenanigans that went down!

The one party we'll wait in line to get into... @johnlegend @chrissyteigen @jerryseinfeld @jessseinfeld @mimisam28 #whitehouse

1. DJ Cassidy: The record producer gave us an idea of just how lit the party was, snapping this selfie with Chrissy Teigen, John Legend and Jerry Seinfeld all waiting in line to get in. “The one party we’ll wait in line to get into….” he wrote.

2. Rita Wilson: Rita gave a nod to some of the evening’s highlights, saying, “@tomhanks and I celebrating with our President and First Lady at one excellent party at #thewhitehouse. #pharrell #jillscott #theroots,” and, just so we all (and PETA) knew what was up, “#fakefur.”

3. Solange: Solange was the evening’s entertainment, and she savored every moment. “The sound check of life…was truly the ultimate, ultimate honor. Can’t even put into words. Really. We will miss your excellence, your grace, and the phenomenal legacy you have let us all share. #ObamaOut.”

Straight off the plane to the White House...

4. Nick Jonas: Nick did his best to be suave, saying, “Straight off the plane to the White House…”

5. Kelly Rowland: Kelly tried out what we presume to be the White House furniture, and apparently, it was a good look on her: One fan commented that she looked “like you could be the first family.”

6. Jay Pharoah: SNL castmember Jay Pharoah posted this star-studded pic of himself with Kelly Rowland, La La, Usher and Wale, saying “All that Ebony at the White House Ayyyyyeeeee…We looking like the last episode of 106 & Park out this Bih.”

Getting to take my Dad to the White House...Priceless. Soooo excited! Cheers! *drops mic*

7. Jordin Sparks: Jordin made the event a family affair, saying, “Getting to take my dad to the White House…priceless. Soooo excited! Cheers! *drops mic.*“

Last night. 3:30am. Leaving the White House after a beautiful afternoon and a surreal night. I'm so proud to have served in this administration. So thrilled to have witnessed this history. It's the end of The Obama White House but the beginning of a new journey to stand up for hope and progress and inclusivity. #ObamaOut

8. Kerry Washington: Kerry had a late, but great night, saying, “Last night. 3:30 am. Leaving the White House after a beautiful afternoon and a surreal night. I’m so proud to have served in this administration. So thrilled to have witnessed this history. It’s the end of The Obama White House, but the beginning of a new journey to stand up for hope and progress and inclusivity. #ObamaOut.”

Stumbling out of the White House at 4am after an incredible night celebrating 8 incredible years. 😭

9. Olivia Wilde: Olivia and husband Jason Sudeikis also partied ‘til the wee hours. “Stumbling out of the White House at 4 am after an incredible night celebrating eight incredible years.”

What are you doing to commemorate Obama’s final days in office? Share @BritandCo!

Nicole Briese
Nicole is the weekend editor for Brit + Co who loves bringing you all the latest buzz. When she's not busy typing away into the wee hours, you can usually find her canoodling with her fur babies, rooting around in a bookstore, or rocking out at a concert of some sort (Guns N' Roses forever!). Check out all her latest musings and past work at nicolebjean.com.
Dinner Party
Celebrity News
Dinner Party Politics