Here’s the Unexpected Story Behind the Viral #TakeAKnee Cheerleader Photo 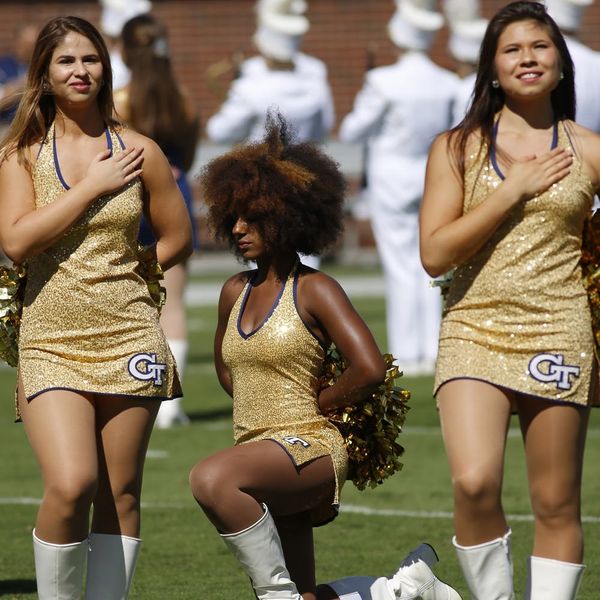 Over the weekend, as NFL players and team owners united in peaceful protest by linking arms or kneeling during the national anthem, a picture of a cheerleader taking a knee was shared around the world, earning more than 35,000 retweets and almost 130,000 likes on Twitter alone. Thanks to The Cut, we now know the story behind the viral image.

Proudest & scariest moment as a yellow-jacket happened at the same time. Thank you @Kaepernick7 for inspiring to #TakeAKnee to take a stand pic.twitter.com/iJVqHEpWx0

Though Raianna Brown shared the photo of herself on Twitter this past Saturday, it was actually taken last year, around six weeks after Colin Kaepernick first knelt to protest violence against people of color. “I’ve always had that twinge and twist to my thought pattern of being social justice-minded, so I followed Colin Kaepernick’s protest,” the Georgia Tech dancer, who was 21 when the photo was taken, told The Cut. “Then right before the game, that weekend of October 1, Terence Crutcher was killed by law enforcement. And for me that was kind of like another last straw, if that was even possible to have another last straw. I just really didn’t feel comfortable standing for a flag for a country that I didn’t feel like was respecting people who looked like me.”

She also explained that the decision to kneel wasn’t made in the moment, and that her coach was fully behind her choice: “I think it was the day before the game, I reached out to my coach and said, ‘I plan on kneeling for the anthem during the game. This is why.’ I sent her an article about the death of Terence Crutcher and gave her all the background and she was really supportive.”

Her peers and the faculty on campus had her back too. “A lot of my classmates were very supportive,” she recalled. “Some of the administration or faculty offices I passed by all the time told me if I had any problems with anyone that they will speak up for me and speak to me about it.”

Not everyone is on Brown’s side, though. The dancer admitted that she’s received a significant amount of backlash since the pic went viral, with some people saying she should be kicked off the team and lose her scholarship. As she told The Cut, though, she’s not even on the dance team this year due to hip surgery she underwent in May. “I didn’t get kicked off the team and my scholarship has to do with academics, not dancing, so, yeah.”

To those who disagree with her choice of protest, she had this to say: “For me, it’s not about being disrespectful toward the country or toward the flag itself. It’s more making a statement about what’s going on in the country that’s being ignored.”

What do you think about Raianna Brown’s #TakeAKnee protest? Let us know @BritandCo.