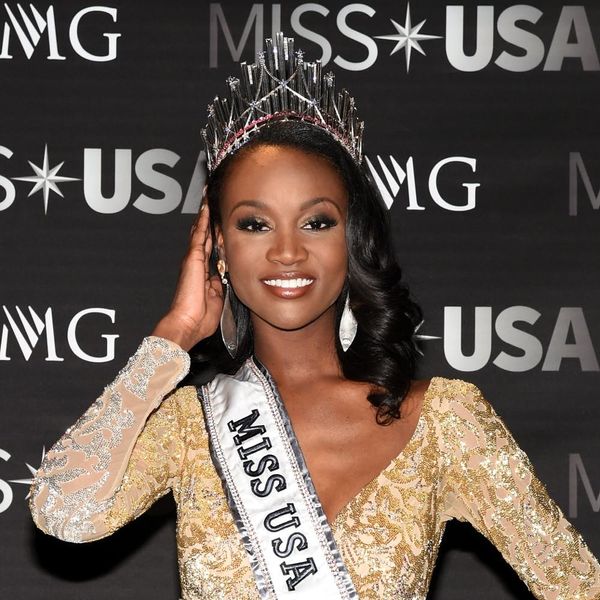 There were just so many reasons to freak out over this year’s Miss USA pageant. The controversial question asked of Miss Hawaii (that had the crowd booing!) and an epic Backstreet Boys performance almost seemed like they couldn’t be outdone when it came to the OMG-factor. But there was one final surprise that has left everyone freaking out in the wake of one of the biggest pageants of the year, and that’s the winner herself, Deshauna Barber, and here’s why.

The 26-year-old contestant from the nation’s capital looked like a Miss USA dream as she walked the stage in her stunning gowns, answered questions like a pro and wowed the crowd with her general amazing presence.

But it is her background that makes her such a unique figure when it comes to pageant winners. When not onstage competing and winning over judges, Deshauna Barber is an Army Reserve officer and IT analyst. Yeah, she’s basically a total badass.

Not shying away from her hardcore lifestyle, judge Joe Zee asked Deshauna during the question period about the Pentagon’s decision to open up all combat roles to women, and if it had “put political correctness over our military’s ability to perform.” Really, dude? Oof. 1st Lt. Barber wasn’t phased at all and readily answered, “As a woman in the United States Army, I think it was an amazing job by our government to allow women to integrate into every branch of the military.” She also added, “We are just as tough as men. As a commander of my unit, I’m powerful, I am dedicated… Gender does not limit us in the United States.” Hellz ya!

Was it her badass-ness that won her the crown? Her beauty? Her ripped abs (seriously, damn girl!)? Her talents? Definitely all of ‘em added together equals the newest Miss USA.

Tweeting an emotional clip of herself receiving her crown, she included the caption, “YAAAAS QUEEN! #MissUSA.” We really couldn’t say it any better. Congratulations, Deshauna!

What do you think of Deshauna Barber’s military and IT background? Tweet us @BritandCo!