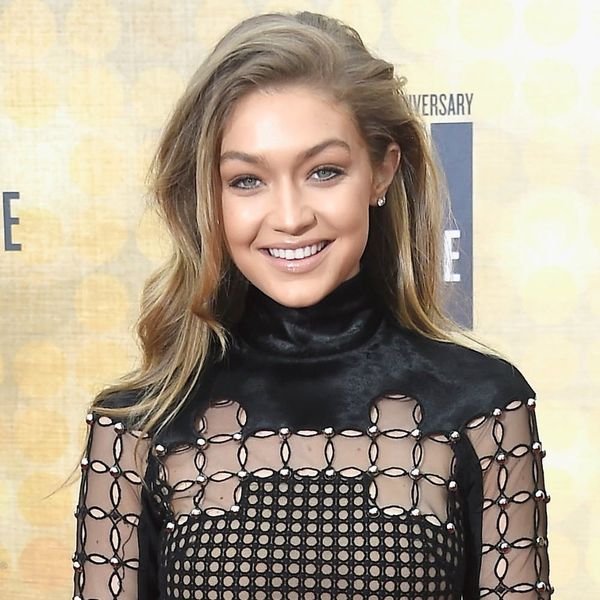 Guess what, guys? LOVE ISN’T DEAD AFTER ALL, and we’ve got PROOF! From Gigi confirming that her r-ship with Zayn is still on to model Anne Vyalitsyna rocking a new sparkler, check out all the lovey dovey buzz below!

1. Gigi confirms she’s still with Zayn. Despite plenty of pesky rumors that have her and Zayn on the growing list of celebrity splits, Gigi Hadid says it’s not so. In a recent interview with Elle.com, the model very pointedly dropped the “b” word in an effort to show the world that her + Zayn still = Zigi. When the outlet asked if she preferred a night out or a night in, she said, “Night in. Cook. Paint. Play with my dog. Hang out with my (*ahem*) boyfriend. Watch movies. Just chill.” Considering that she was also recently spotted rocking her “Z+G” necklace and singing Zayn lyrics on Snapchat, we think it’s pretty safe to say that the ex 1D member is, in fact, the boyfriend in question. And there you have it folks! A good reminder not to believe everything you hear. (Photo via Neilson Barnard)

2. Lindsay Lohan visited the set of The Parent Trap. Turns out, celebs get every bit as nostalgic for the ‘90s as we do: Take Lindsay Lohan, who visited the set of her 1998 blockbuster The Parent Trap. “A trip down memory lane,” she captions a photo of her in front of her old stomping grounds. “Annie’s house, but it was number seven in the movie.” Good memory, Linds! (Photo via @lindsaylohan)

3. Model Anne Vyalitsyna is engaged: Model Anne Vyalitsyna (better known as Anne V) and Adam Levine’s pre-Behati paramour has found love of her own, as she proved when she showed off this shiner on her social media pages. Engaged to longtime boyfriend Adam Caham, Anne wrote, “Yep, this happened.” With celebs breaking up left and right (noooooooooo, Demi and Wilmer!), it’s nice to see a couple moving in the other direction — just check out that stunning ring!

4. People are furious about the question Miss Hawaii was asked during the Miss USA Pageant. Miss Hawaii may have lost the crown to Miss District of Columbia , Deshauna Barber, but it was no Steve Harvey-style announcement mistake that had the crowd up in arms over her treatment. Rather, it was the extra-personal subject matter she was forced to answer during her Q + A. “If the election were held tomorrow, would you vote for Hilary Clinton or Donald Trump for President, and why would you choose one over the other?” the judges asked her. Audience members (perhaps wise to that old adage which says that a lady never discusses money, politics or religion) were outraged, audibly booing for extended periods and taking to Twitter to share how unfair they thought the question was. Miss Hawaii, for her part, answered the question with all the poise and grace one could possibly imagine, saying “All I have to say is, it doesn’t matter what gender, all we need in the United States is someone who represents those of us who feel we don’t have a voice. Those of us who want our voices heard. We need a president to push for what is right and what America really needs.” (Photo via Ethan Miller/Getty)

5. This video of a baby duck chasing a man is adorable AF. Talk about persistence!

6. Quote of the day: “With my experience of social media, I thought idiots were going to idiot. That’s the way the world is. Noma was chosen because she was the best person for the job.” J.K. Rowling to haters regarding casting an African American Hermione in the Harry Potter play. (Photo via Danny E. Martindale)

Are you stoked to learn that love isn’t dead after all? Let us know over @BritandCo!

Nicole Briese
Nicole is the weekend editor for Brit + Co who loves bringing you all the latest buzz. When she's not busy typing away into the wee hours, you can usually find her canoodling with her fur babies, rooting around in a bookstore, or rocking out at a concert of some sort (Guns N' Roses forever!). Check out all her latest musings and past work at nicolebjean.com.
Celebrity Couples
Relationships
Celebrity Couples Engagement Engagement Rings love Morning Buzz