The House Voted to Block Trump’s National Emergency, But Trump Still Has the Upper Hand 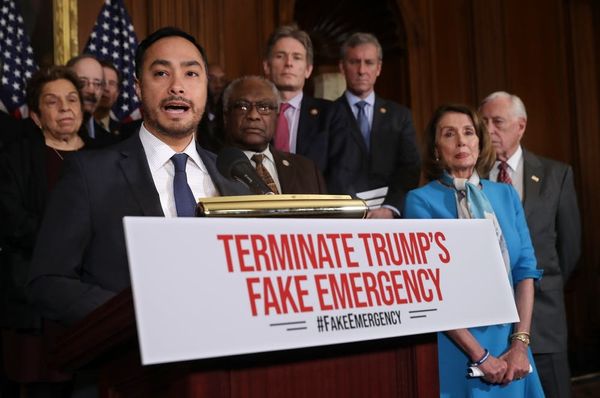 After months of threatening to do so, President Donald Trump finally went ahead and declared a state of national emergency in order to secure the funding required for his southern border wall. In response, Democrats in Congress, who have remained staunchly opposed to Trump’s plan, quickly moved to vote on a bill that seeks to block the president’s declaration. Earlier this week, the House held a vote on the issue, just barely getting enough votes to send the matter to the Senate.

In the House vote on Tuesday, 13 Republicans crossed party lines to vote with Democrats in disapproval of the state of national emergency. According to the New York Times, the dissenting Republicans included one representative from a border state, Texas representative Will Hurd, whose district is along the US-Mexico border. The Times also notes that Hurd is the only Republican in the House who represents a southern border district — the rest are Democrats, who also oppose the national emergency.

Now, the vote moves on to the Senate, where Republicans are holding a razor-thin majority on the vote. As in the House, a number of Republican senators have indicated that they will break ranks and vote with Democrats. Senators Lisa Murkowski, Susan Collins, and Thom Thillis have all stated publicly that they will vote in favor of the Democrats’ bill, bringing the total number of potential votes for the bill to 50, including all 47 Democrats. Still, the Democrats need one more vote for the bill to make it out of Congress and onto the president’s desk, and at this point, nobody else has said they’re willing to budge. Still, FiveThirtyEight suggests that another Republican may change their mind at the last minute if they think they’re vulnerable to more liberal voters in the 2020 elections.

If the Democrats can come up with the votes in the Senate, the bill will be sent to the president’s desk. Trump has already promised to veto the bill if it makes it that far. Technically the Senate could override a presidential veto, but the Democrats would need a super majority vote, and as it is, they still don’t have enough Republican cooperation to get the bill out of Congress.

Meanwhile, California and a number of other states are suing President Trump over the state of emergency declaration. A total of 17 states are behind the lawsuit, which argues that “significant harm” will be caused when the administration takes funds earmarked for disaster relief and military construction projects to use for the border wall. But NPR reports that courts are likely to side with the president, given that the constitution grants the president broad powers for declaring national emergencies.

Between the bill and the lawsuit, Democrats are exhausting their available legal options to thwart the president’s plans for the southern border wall. Lawmakers have so far not suggested other ways they might prevent the president from proceeding as planned.