How I Turned My Infertility into Art 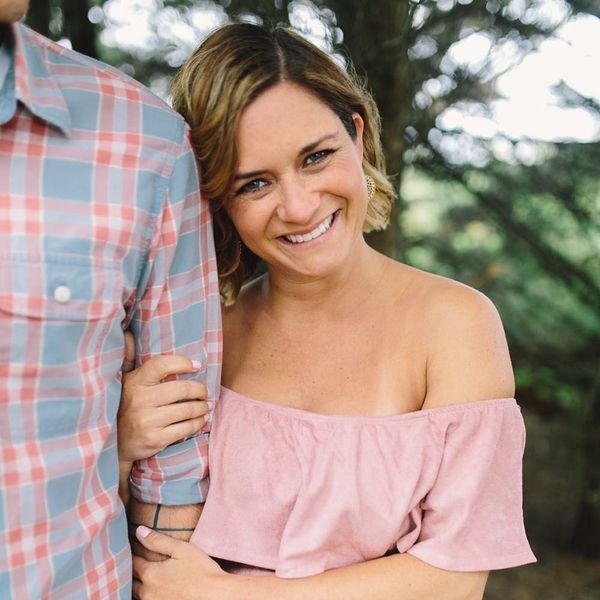 First, let me preface my story by offering this little nugget: It’s not a contest. Pregnancy, giving birth, motherhood… none of it. It’s not a contest. I did not suffer the least, I certainly did not suffer the most, but goddamn, trying to conceive was a real mutherf***er of a time. And if it was also that way for you — then this article is for you. And because it’s not a contest, if you sneezed and got pregnant on your first try, then this is also for you. Cause hell, women are amazing and creating a human is a goddamn miracle and our bodies are magic no matter how you get there or how long it took you.

When my husband and I decided to start a family, I was diagnosed with PCOS (Polycystic Ovarian Syndrome). I didn’t have a clue what it meant, and my doctor, as lovely as she is in so many ways, simply suggested that it wasn’t severe and not to worry too much about it. She was sure that eventually I would get pregnant, and that if it didn’t happen after a year of trying, we could then look at fertility treatment options. I heard what she said, but that wasn’t going to work for me. I’m a doer. I’m a shaker. And if I’m being real, I’m a bit of a control freak. Waiting a full year before taking action was not going to happen.

When you have PCOS, you grow small cysts on your ovaries, which, in turn, leads to hormonal imbalances. Hormonal imbalances affect your period, which can sometimes cause you not to ovulate. And as most of us already know, no ovulation means no baby. Other PCOS symptoms include acne, weight gain, hair growth or thinning hair, irregular periods, depression, and even diabetes. Fun stuff, right? Incidentally, PCOS is also the leading cause of female infertility.

Now, depending on who you ask, you’re going to get a different course of action to address this hormonal imbalance or lack of ovulation. Just in case anyone missed sexual reproduction 101, here’s a recap: Once a month, during successful ovulation, your body will make a nice juicy follicle that turns into an egg that erupts and gets released, travels to the fallopian tube and chills out there for 24 hours waiting for that trusty sperm (assuming that’s healthy too) to fertilize it. If it does, and it successfully implants itself, then, BINGO — you have the miracle of life.

These days, getting pregnant is super easy (said no one with fertility issues, ever!). All you have to do is track your ovulation and time sex accordingly! There are even handy apps and little sticks you can pee on that gauge when ovulation will happen. Plus, a woman’s cycle is always about 28 days long, so it’s really a no-brainer to figure out when you’re actually ovulating. But if your hormones are out of balance, those sticks and tricks don’t apply. When you have PCOS, your cycles can be 30 days one month, 58 the next, and 42 the following. I know because mine were.

When I decided to take matters into my own hands, I felt completely overwhelmed by the amount of information out there. I took to the ol’ interweb to read blogs, articles, and message boards. I asked my doctor, I asked holistic practitioners, and I asked the stars. Never one to miss out on an opportunity, I did it all. My doctor prescribed me Clomid (a powerful little drug that helps many women ovulate, and oh yeah, by the way, could also lead to cervical cancer later, but NBD.) I took HCG (Human Chorionic Gonadotropin) shots which can help cause ovulation, but side effects could lead to multiple pregnancies (Octomom, anyone?). With the help of those two fertility treatments, I also received two IUI procedures wherein sperm is placed into your uterus through a flexible catheter that is passed into the vagina, through the cervix, and into the uterus. Now, that’s what I call a Friday night, folks! Just in case you were wondering, and I certainly was at the time, this procedure “doesn’t hurt“. DOESN’T HURT?! Say that to my face! Or at least to my retroverted uterus! Just to make sure all my bases were covered, I also started seeking more holistic approaches. I started seeing an acupuncturist twice a week (which was super fun since I’ve had a long time phobia of needles), I read the Pregnancy Miracle, which recommended I change to a plant-based diet (buh-bye In-N-Out burger), get rid of all non-natural cleaning products, and stop drinking alcohol and coffee. By the way, dealing with infertility and also not drinking wine might be the deadliest combo of all time. I wouldn’t wish it on my worst enemy.

I performed daily fertility massages on myself (thank goodness for YouTube), and made fertility smoothies! Oh, the smoothies!!! We’re talking bee pollen, flax seed oil, hemp seeds, and goji berries! Oh, did I mention I had to pick up a second job just to pay for those goddamn goji berries? Turns out fertility treatments and goji berries are not covered by insurance and cost a pretty penny. One day I also drove to Chinatown and bought fertility herbs from an elderly Chinese gentleman who also suggested I dab some horse placenta around my eyes so that I wouldn’t be so angry or tired looking, and dab I did. (Goddamn right I was angry! I had to get a f***ing second job to pay for goji berries). In order to decrease my stress levels, I started regularly receiving massages and attending meditation classes. I consumed pineapple core for its bromelin for my cervical mucus, I made extra sure my vaginal canal wasn’t too acidic, cause yeah, that’s a thing, and I ate Brazil nuts to help with my uterine lining and blood flow. I prayed to the heavens and received spiritual healings. And I had mucho sexo. Mucho mucho sexo.

Doing all of this stuff was hard. It was hard to stay positive. It was hard to keep the faith. And again, it was super hard to pay for goji berries. But the hardest part of all, at least in my experience, was the isolating nature of the experience and my inability to be happy for others who were pregnant. My PCOS embittered me and turned me into a version of myself that was hard to live with. I started turning down baby shower invites and avoided even being around pregnant bellies. It hurt too much to be around it. I woke myself up in the middle of the night in sweat and tears. It was the most painful and all-consuming experience of my life. Not only did I feel sad and discouraged that I wasn’t able to get pregnant, but I felt guilty for my inability to be happy for others. Infertility is a real b*tch that way. A word about self-care, ladies. It’s hard to put into words what it feels like when you’re in it, if you’ve never been in it, but sometimes you just gotta take care of you. If being around pregnant ladies is breaking your heart, it’s okay to remove yourself from those situations. It’s not always polite — but it’s always okay.

But my story, albeit long, has a happy ending. After doing all of the above, and never actually knowing which of them ended up being the culprit (my guess is it was the goji berries), my husband and I found out one fateful morning last January that were going to be parents. I legitimately loved being pregnant every goddamn step of the way, and I gave birth to a gorgeous hunk of a baby boy in September that I simply can’t keep my hands off of.

Since the day I found out I was pregnant, and I swear on my life this is true, I have been in a perpetual state of gratitude. And now that my baby is five months old (and most of the post-natal hormones have left my body such that I don’t cry at the onset of every sappy commercial that ends in a kid going away to college), I have felt compelled and impassioned to share my story. I wanted to find a way to empower other women who are struggling with infertility. I wanted to tell them that they are not alone. So I took to pen and paper and I wrote. I wrote and wrote and wrote. Until one day, I had myself a script.

When life gives you lemons, make lemonade — or make a funny, kick-ass, empowering film about infertility. That film is called GRIT, and it’s a short dramedy that follows Frankie, on the onset of her infertility diagnoses. In her late 30s, with little money in the bank, and happily single, Frankie must use her strongest asset, her grit, to tackle the issue head on. Frankie’s story addresses the societal shift towards women choosing to have children later in life, it sheds a light on infertility, and it celebrates choice in an era where women’s reproductive rights are under attack. You can learn about it here: GRIT.

Whether you’re pregnant, trying to conceive, struggling to conceive, or a proud (and tired!) mama, I hope you enjoy watching GRIT as much as I enjoyed writing it. It’s a passion project that has not only been cathartic for me, but also one that is creating opportunities for ladies behind the camera — something I’m committed to as a filmmaker. If this sounds like the kind of project you can get behind, please check out the link, follow the campaign, and share with your friends! Here’s to juicy follicles, taking care of you, and supporting one another!

Learn more about GRIT here, and let us know your thoughts @BritandCo and @GritTheFilm1.

From Your Site Articles
Eileen Abarrca
Eileen Abarrca is an LA-based writer, filmmaker, and actress. Originally from the SF Bay Area, she migrated to Los Angeles to pursue a degree in Philosophy from UCLA, and then headed to New York where she received her M.F.A from The Actors Studio. A native Spanish speaker and dual citizen of the US and Argentina, Eileen made her directorial debut with the award-winning political documentary entitled Finding Mabel, about Argentina's 30,000 Desaparecidos. A proud member of Film Fatales, Women in Film, and The Actors Studio, Eileen is currently in pre-production on her next film GRIT.
Creativity
More From Creativity