How to Throw a Killer Olympics Party 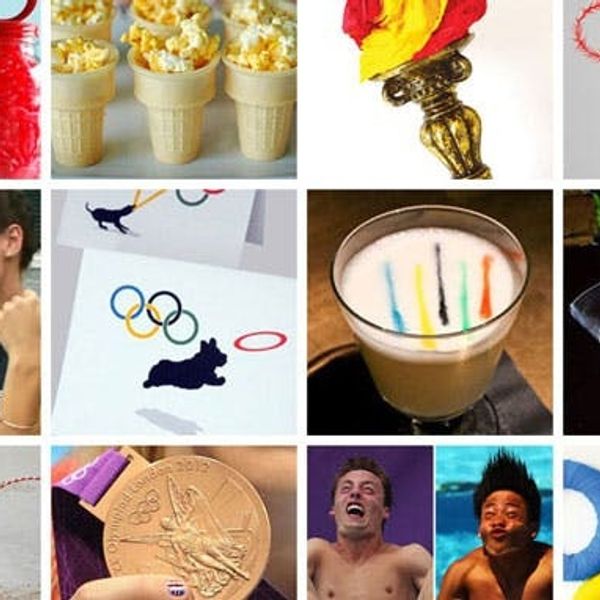 The schedules are set, apps are downloaded, Olympians are pumped, and your DVR is officially at maximum capacity. Clearly it’s time to throw together a killer Olympics party! From the best commercial break entertainment to all sorts of ring-themed sweet treats, here are 20 must-haves for any Summer Olympics soiree.

Talk about yet another perfect use for mason jars and mason jar rims! Could do a similar thing with fruit and veggies (with toothpicks on the side), or a mixture of sprinkles and candies for some cupcake or ice cream decorating action. (Tutorial and Photo: No Biggie)

Mmm. Popcorn in an ice cream cone is a great combo of savory and sweet, and so easy to put together. Kick it up a notch with one of our tricked out popcorn recipes, or scoop a little butterscotch ice cream into the cone before topping with popcorn. (Tutorial and Photo: A Small Snippet)

If you’re looking for an awesome centerpiece, take an old trophy or candleholder, grab some fiery tissue paper and make yourself a torch! (Tutorial and Photo: Hostess with the Mostess)

4. Olympia Headpiece ($165): Take your love of the games to the next level but wearing your love on your head! This crazy headpiece is just what the Brits ordered for an extravagant and awesome summer games.

5. Team USA performs Call Me Maybe: Another Call Me Maybe lip dub, this time brought to you by the hotties on the US Swim Team. Love it!

6. Summer Olympics Corgi and Labrador Cards ($10): On this list because they exist. That is all.

Remember how Gaston from Beauty and the Beast ate four dozen eggs every morning to help him get large? This drink is sort of like that in that it promises strength and honor. Just a little gin, honey syrup, lemon juice, and an egg white and you’re on your way. (Recipe and Photo: The Daily Meal)

If you’ll be getting into the Olympic spirit in a more analog way, take to the beach and set up your own games! (Photo: A Small Snippet)

10. Olympics Nails: Nail art has made it to the Olympics too!

11. Olympic Diving Faces: If you haven’t seen this, you are probably cracking up right now. Thank you super fast cameras for being able to capture these totally priceless facial expressions.

For a quick bit of decor, grab paper plates or styrofoam rings and wrap colorful streams around them to create rings. Use pins, staples, or glue to keep in place. (Tutorial and Photo: Hostess with the Mostess)

What we’re most pumped about with this sweet treat is finding out the Olympic Cookie Cutter exists! Incredible. (Recipe and photo: The Kitchn)

Set up an Olympic-themed candy bar using cheap spray painted buckets and brightly colored candy. (Tutorial and Photo: You Are My Fave)

16. Cool Runnings: Gotta have a few Olympic movies ready to go should you need a switch up or party until the wee hours. Though Cool Runnings is more of a Winter Olympics jam, your guests will still get a kick of nostalgia when you throw it on.

18. Mobile Apps: If you’ve gotta watch the games on the go or don’t have an official cable or satellite situation, these apps are essential. Our fave is definitely Curly’s, an app that uses super simple illustrations and copy to describe every Olympic sport.

Finally, some DIY style. This simple bracelet is a subtle piece to show your Olympic spirit. Stay tuned for our very own style DIY next week! (Recipe and photo: Brassy Apple)
Anjelika Temple
As Co-Founder and Chief Creative Officer of Brit + Co, Anjelika Temple brings her voracious consumption of all things creative and colorful to DIY projects, geeky gadgetry finds and more. When she's not DIY-ing her heart out, you'll find her throwing dinner parties with friends or adventuring with her husband David, their daughters Anokhi and Indira, and their silly dog Turkey.
Olympics
Home
Olympics
More From Home