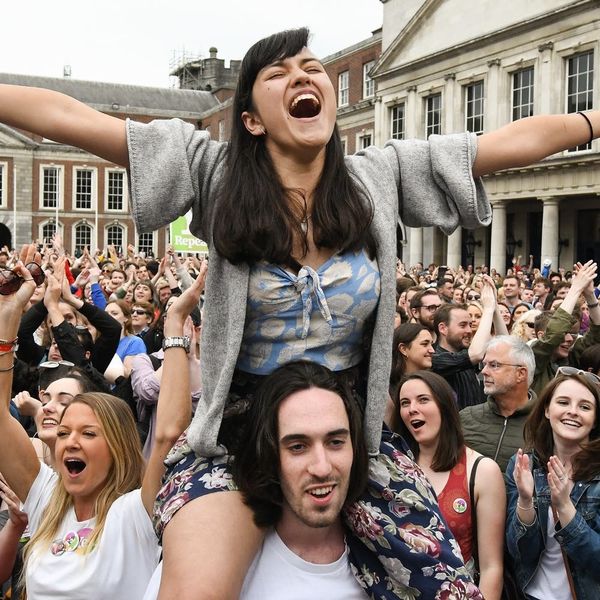 It’s a historical day for women’s rights in Ireland. In a landslide vote of 66.4 percent, the country has voted to repeal its eighth constitutional amendment banning women from abortion. Now, celebrities are sounding off about the pro-choice win with a slew of celebratory posts.

The eighth amendment has been in place since being voted into the constitution of the largely Catholic country by referendum in 1983. With its repeal, the government will legally introduce abortion up to 12 weeks into its healthcare system.

Huge crowds of the repeals supporters, some of whom flew home from overseas to participate in the vote, gathered at Dublin Castle to revel in the moment.

Men, too, supported the decision, with Joshua Jackson taking to social media to voice his pride.

Being that I am a son of a woman from Ireland... I always stand with the woman of Ireland...but today I am especially proud of my blood. A ray of sunshine on a dark landscape these days. #repealthe8th

“Being that I am the son of a woman from Ireland… I always stand with the women of Ireland… but today I am especially proud of my blood. A ray of sunshine on a dark landscape these days,” he wrote.

New Zealand-born actor Russell Crowe echoed Jackson’s sentiments, writing, “I have two beautiful sons. I wasn’t lucky enough to have a daughter. If I was, I’d wish her to have courage like yours. Nobody’s daughter should ever be told she doesn’t have authority over her own body.”

I have two beautiful sons . I wasnt lucky enough to have a daughter. If I had, I’d wish her to have courage like yours.
Nobody’s daughter should ever be told she doesn’t have authority over her own body.
This video is the beginning and the end of the debate. #yes https://t.co/YeV9s7NmRy

Are you excited to see Ireland’s women’s rights progress? Share with us over @BritandCo.

Nicole Briese
Nicole is the weekend editor for Brit + Co who loves bringing you all the latest buzz. When she's not busy typing away into the wee hours, you can usually find her canoodling with her fur babies, rooting around in a bookstore, or rocking out at a concert of some sort (Guns N' Roses forever!). Check out all her latest musings and past work at nicolebjean.com.
Politics
Politics
Politics Womens Health
More From Politics