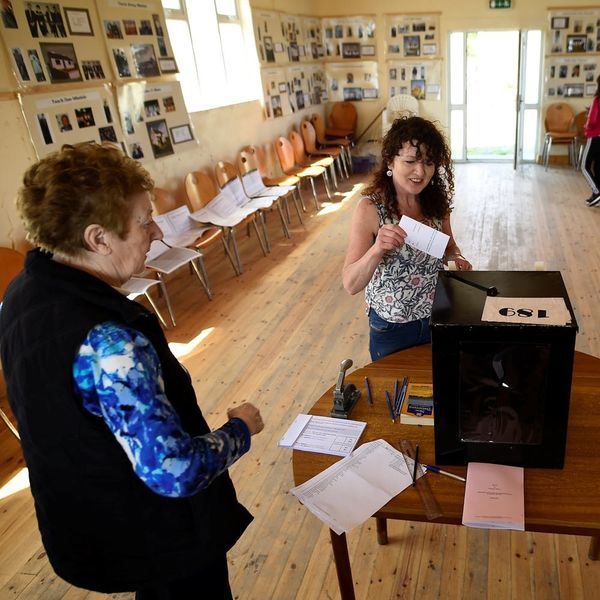 After many decades of pro-choice activism, Ireland may finally legalize abortion. The predominantly conservative and largely Catholic nation has banned abortion in various ways for more than a century, since before it gained independence from the UK. A change in the law would be a massive victory for reproductive and human rights. This could all change on Friday, when Ireland is holding a vote on a referendum that would repeal the Eighth Amendment, which has forbidden abortions since 1983.

The chance to repeal the Eighth Amendment has fervent support from Irish feminists, women’s rights advocates, and human rights advocates. Many Irish women living abroad are even flying back to Ireland so that they can vote to repeal.

Using the hashtag #HometoVote, Irish women who live elsewhere are sharing their stories of returning in order to participate in this extremely important vote.

I made friends at the boarding gate. Not one of us knew each other. #hometovote #london #ireland @LdnIrishARC pic.twitter.com/w7A91tUrZu

I’m coming #hometovote! Thirty hours from Bangkok to Dublin on a mission to repeal that eighth and get my bodily autonomy 👍#voteyes #together4yes #repeal #RepealThe8th pic.twitter.com/CKgLO0NDxk

The BBC reports that the #HometoVote campaign has helped make the trip back easier for some people. Irelanders have been helped to arrange for visiting voters to stay with them, and people have been banding together to share car rides. The same sort of campaign was launched prior to the successful vote on gay marriage three years ago.

As Margaret Talbot observes in the New Yorker, voters in Ireland have demonstrated more progressive values in recent years. Ireland voted for the legalization of same-sex marriage in 2015 and, last year, elected a gay biracial man, Leo Varadkar, as Prime Minister. Still, there is staunch opposition to abortion access, in large thanks to the conservative influence of the Catholic Church.

People in need of an abortion in Ireland have, for decades, been forced to travel out of the country, and even that was illegal before 1992.

That year, a 14-year old girl became pregnant as the result of a rape, and she was at risk for suicide as a result of her pregnancy. Her parents took her to England to have an abortion, but first had to appeal all the way to Ireland’s Supreme Court for permission. It was then that the Court ruled patients seeking an abortion could travel abroad to obtain them, and that abortion would be permitted in Ireland if it would save the life of the mother.

These exceptions to an exceedingly strict law are far from sufficient, and many Irish voters are excited and eager to do away with the Eighth altogether. The referendum vote on Friday is a hopeful chance to take huge steps toward ensuring the safety, health, and dignity of anyone in Ireland who may need an abortion.