WT Actual F Is Going on With Jeff Sessions and Russia? 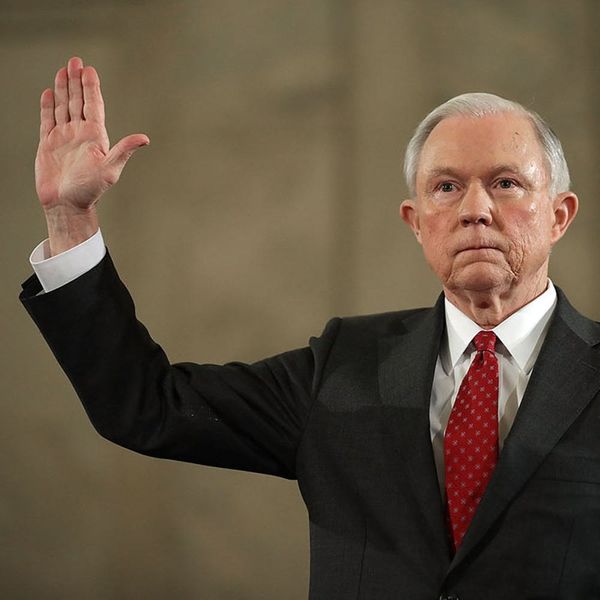 The Trump administration’s connections to Russia just keep coming out, and the drama is beginning to feel like a reality show. By now, we all know that the Kremlin had some sort of involvement in the 2016 presidential election. More recently, former national security advisor Michael Flynn resigned after news broke that he’d also had communications with Russia during the presidential campaign, during which time he discussed US sanctions with Russian intelligence. Now, it’s been revealed that controversial and newly confirmed Attorney General Jeff Sessions may have also met with Russia’s ambassador to Washington, Sergey Kislyak, on two separate occasions and did not disclose these meetings during his confirmation with the Senate.

These new allegations are blowing up the internet because a) they offer yet another mysterious link between the Trump administration and Russian intelligence and b) Sessions did not own up to these communications when questioned about it during his confirmation with the Senate.

During his confirmation, Senator Al Franken asked Sessions, “If there is any evidence that anyone affiliated with the Trump campaign communicated with the Russian government over the course of this campaign what will you do?” He responded, “I’m not aware of any of those activities […] I did not have communications with the Russians and I’m unable to comment on it.”

Additionally, Senator Patrick J. Leahy asked Sessions for answers to written questions in January. One of those questions read, “Several of the President-elect’s nominees or senior advisers have Russian ties. Have you been in contact with anyone connected to any part of the Russian government about the 2016 election, either before or after election day?” To that, Sessions responded, “No.”

Sessions responded to these new allegations with a blunt statement that reads, “I never met with any Russian officials to discuss issues of this campaign. I have no idea what this allegation is about. It is false.”

WHERE IS THIS NEWS COMING FROM?

Is this yet another controversy the Trump team will write off as “fake news?” According to The Washington Post — who broke the story late last night — this new information is coming from whistleblowers within the Justice Department… a somewhat strange turn of events, as that’s the Department Sessions is in charge of. Intelligence officials were also the ones who informed The New York Times about Michael Flynn’s communication with Russia a few weeks ago.

HOW other lawmakers ARE RESPONding

Naturally, the news is causing outrage among Democrats. Senator Elizabeth Warren published a series of tweets that read: “Now Jeff Sessions is AG the final say on the law enforcement investigation into ties between the Trump campaign & Russia? What a farce. This is not normal. This is not fake news. This is a very real & serious threat to the national security of the United States.” Furthermore, a handful of Democratic members of the House (like Nancy Pelosi and Elijah Cummings) are asking Sessions to resign entirely.

But most Democrats have been opposed to Sessions from the start. So their stark response doesn’t come as a huge surprise. However, there are also some prominent Republicans who have spoken out against Sessions since these allegations have come to light. The Washington Post’s report claims Maine’s Senator Susan Collins and Ohio’s Senator Rob Portman have said that Sessions should excuse himself from the ongoing investigation into the Russian hacking. Republican Congressman Jason Chaffetz also tweeted:

AG Sessions should clarify his testimony and recuse himself

During his weekly news conference, Speaker of the House Paul Ryan told reporters, “Should he [Sessions] recuse himself? I think he answered that question this morning. If he himself is the subject of an investigation, of course, he would. If he is not, I don’t see any purpose or reason for doing this.”

There is already an FBI investigation underway about the Trump administration’s communications with Russia. But here’s the issue: Currently, as Attorney General, Jeff Sessions oversees the FBI. So if Sessions was actually involved in some of those mysterious communications, that is problematic for obvious reasons. Because of this, many lawmakers are requesting that Sessions “recuse himself” from the FBI probe. Essentially, that means that he should allow that investigation to continue without any further involvement from him.

If these communications are proven to be true by the FBI, it could then be determined that Sessions lied under oath. Which, again, is very problematic when your role is Attorney General of the United States.

Here’s something to think about: Former national security advisor Michale Flynn’s Russian communications were with the exact same Russian ambassador Sergey Kislyak during the campaign. His decision to omit those communications to Vice President Mike Pence caused Trump to fire him. The similarities here beg the question: Will Trump also ask Sessions to resign?

So far today, Trump has tweeted about a rise in stock market gains since his election but has neglected to comment publicly on this particular situation.

However, aboard the aircraft carrier USS Gerald Ford in Newport News, Va., Trump told reporters he has “total” confidence Sessions and that he “probably” testified truthfully before Congress. When asked if he should resign, Trump replied, “I don’t think so.”

UPDATE (March 2, 2017 4:34 pm): Since first drafting this report, Sessions has recused himself from the ongoing FBI investigation and any future investigations that look into the relations between Trump’s team and Russian officials. This comes shortly after Trump expressed support for Sessions and said he should not recuse himself from the investigation. According to a breaking report by The New York Times, Sessions “strongly denied that any of his conversations with Russian officials were related to the presidential campaign. And he said he did not intend to deceive the Senate when he said he had no such meetings with Russian officials.”

Cortney Clift
Cortney is the senior writer and special projects editor at Brit + Co. She typically covers topics related to women's issues, politics, and lifestyle. When she's not buried behind her computer you'll find her exploring New York City or planning her next big adventure.
Politics
Celebrity News
Politics