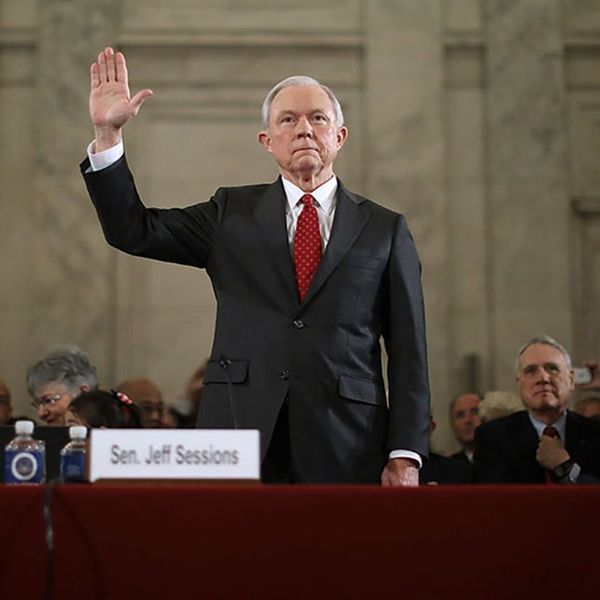 With Trump’s inauguration just around the corner (t-minus 10 days, people), his imminent presidency is really becoming real. And with a real presidency comes a brand new cabinet, many of whose members are being confirmed by the Senate this week. Kicking off that process: Jeff Sessions. Sessions is the proposed new attorney general. But like the majority of Trump’s picks, Sessions’ stance on key issues and controversial comments have provided him with very vocal adversaries, current Senator Cory Booker included. If you’re currently seeing Sessions all over your feed and want to know more about him, where he stands and what he might do if approved, read on for a brief explanation.

What does he stand for?

Immigration: Sessions is pretty much as conservative as conservatives come. He is known for taking a very Trumpian stance on undocumented immigrants and for being an advocate of even reducing legal immigration.

Gay Rights: In the LGBTQ community he is not thought of kindly. Sessions proposed a nationwide amendment which aimed to ban same-sex marriage and opposed the Don’t Ask, Don’t Tell Repeal Act of 2010, which allowed gay, lesbian and bisexual members of the military to serve openly.

Civil Rights: In terms of civil rights issues, he doesn’t really have a clean record there either. There have been numerous reports of the Alabama senator making questionable comments over the years (read some of those here), but the main civil rights controversy involving Sessions surrounds comments he has made about the KKK.

Back in 1989, Reagan proposed Sessions as a federal judge. During the Senate hearing to confirm the position, Thomas Figures, an assistant US Attorney who worked under Sessions during a trial involving the KKK, told the committee that Sessions once said he thought the KKK was “Okay until I found out they smoked pot.” That comment and other related issues ended up costing him the position.

Women’s Issues: Session is firmly anti-abortion. He was also among five senators who opposed the Violence Against Women Act in 1994. The act put over a billion dollars toward the investigations and prosecutions of violent crimes against women and imposed an automatic and mandatory restitution on those convicted. The other 93 senators all voted in favor of the act.

Additionally, after Trump’s now infamous Access Hollywood tape was released, he was asked by The Weekly Standard whether he thought Trump’s comments about “grabbing women by the pussy” should be categorized as sexual assault. To that, Sessions responded, “I don’t characterize that as a sexual assault. I think that’s a stretch.”

To see where Jeff stands on every issue, read more here.

What can he do as attorney general?

As US attorney general, Sessions will lead the Department of Justice (which includes the FBI and DEA, among other organizations). An AG’s duties include prosecuting cases that involve the government, giving legal advice to the president and heads of the executive departments when needed and making recommendations to the President concerning appointments to federal judicial positions.

Sessions is expected to speed up prosecutions and deportations of unauthorized immigrants if appointed. While Trump has since shifted his stance on the proposed Muslim ban, Sessions once said he was open to considering it in a Breitbart interview last December with Stephen K. Bannon.

Democrats fear he could hold back civil rights advancements and police accountability due to the racial comments he has made in the past. His department will also advise the White House on Supreme Court nominees.

Sessions is currently undergoing his confirmation hearing for the role of AG. He is the first of President-elect Donald Trump’s Cabinet nominees to get a hearing on Capitol Hill, and it’s expected to last until tomorrow (January 11). So far the issues of his past racial comments and legal actions involving Hillary Clinton have been the focus.

Democratic Senator Cory Booker is set to testify against Sessions during the hearing, which is a historic move for the politician. This would be the first time in Senate history that a sitting senator will testify against another sitting senator during a confirmation. However, because the majority of the senate is Republican, he is still expected to be cleared for the position.