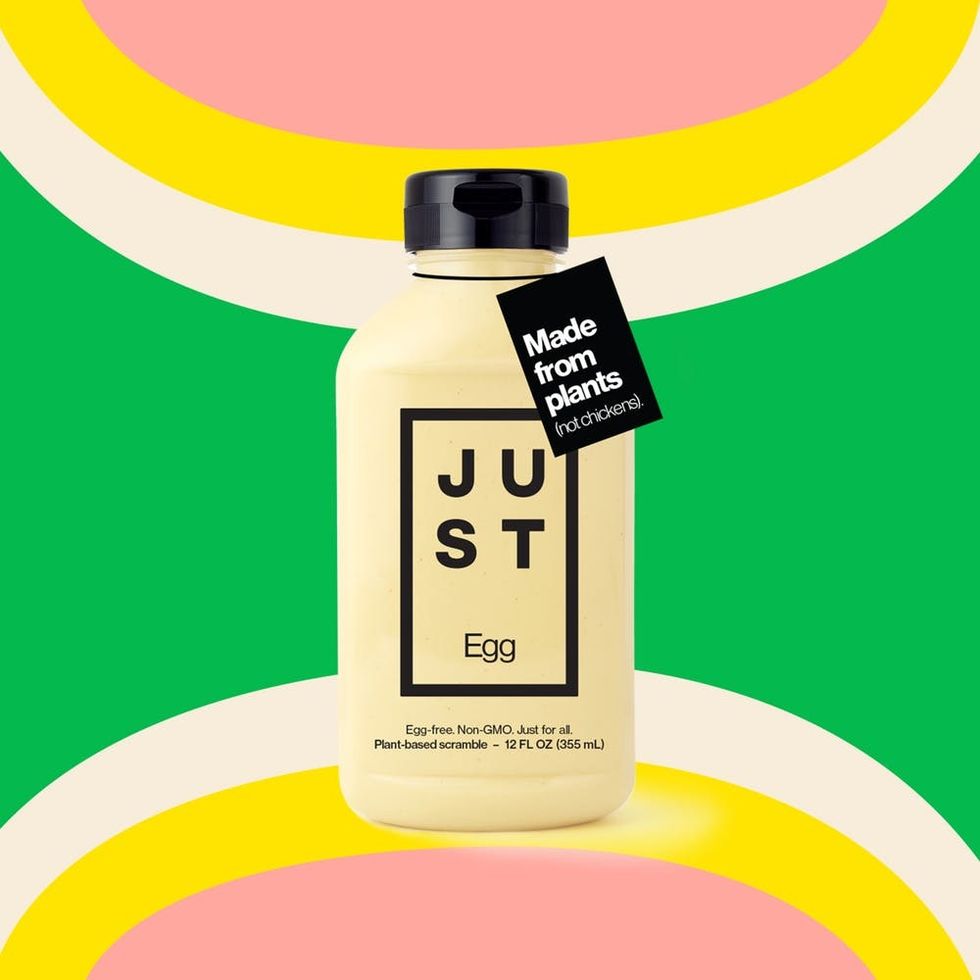 Welcome to our new food series called Eat It Up, where we share the kitchen gadgets and foods that we can’t cook without.

JUST, the makers of dairy- and egg-free cookie dough, mayo, and sauces, has spent the last few years attempting the seemingly impossible: to formulate a plant-based egg that looks like, cooks up like, and tastes like scrambled eggs. Working with food scientists, researchers, and Michelin-starred chefs, the company tested and tweaked their mung-bean-based egg for years before finally releasing it to the public last month. We had a chance to try JUST Egg at the Brit + Co HQ to see if it really could fool our tastebuds.

The chef cranked up the skillet, opened up the 12-ounce container ($8-$9), and poured in the pale yellow liquid. It miraculously congealed before our eyes, just like chicken eggs. He used the same technique you normally would to scramble eggs, scraping up the fluff from the bottom of the pan with a spatula until no liquid remained. He divved it up to roughly 30 tasters, a mix of vegetarians and omnivores, and we took a bite. Amazingly, we were all fooled. This product tastes exactly like a fresh scrambled egg, both in texture and flavor. There’s no bean-ish taste or sandiness. Nutrition-wise, JUST Egg has slightly less protein (5 grams) than a chicken egg (6 grams), but it’s less caloric (45 versus 70) and contains half the total fat (2.5 grams versus 5).

In the coming weeks, JUST Egg will be available for purchase on JET.com and in Wegman’s, Fresh Thyme, Gelson’s Market, and more grocers. But if you’re dying for a taste now, you can find it at Veggie Grill, a plant-based fast-casual chain restaurant. JUST partnered with Veggie Grill to create an All-Day Breakfast Burrito ($11), which we also had a chance to try.

JUST Egg, combined with Veggie Grill’s “chorizo,” home fries, black beans, cheddar “cheese,” and fire-roasted salsa, is wrapped up inside a toasted flour tortilla for a breakfast burrito that, while satisfying, won’t fill you with regret afterward. Dare we admit, many of us ended up eating two!

Yep, we are big fans of this plant-based egg and can’t wait to experiment with it in other skillet recipes. JUST says the JUST Egg can even work in fried rice, pancakes, crepes, French toast, and more. Talk about nom.

Get more food news by following Brit + Co on Facebook.

Anna Monette Roberts
As Brit + Co's Food Editor, Anna Monette Roberts has an insatiable appetite for developing tasty dishes. When she's not dreaming about her next meal, she's . . . well, probably cooking up her creations. Her favorite foods include chewy chocolate chip cookies, Rosé Champagne, and gooey French cheeses — in no particular order.
Eat It Up
Food News
Eat It UpGrocery ShoppingHealthy Essentials
The Conversation