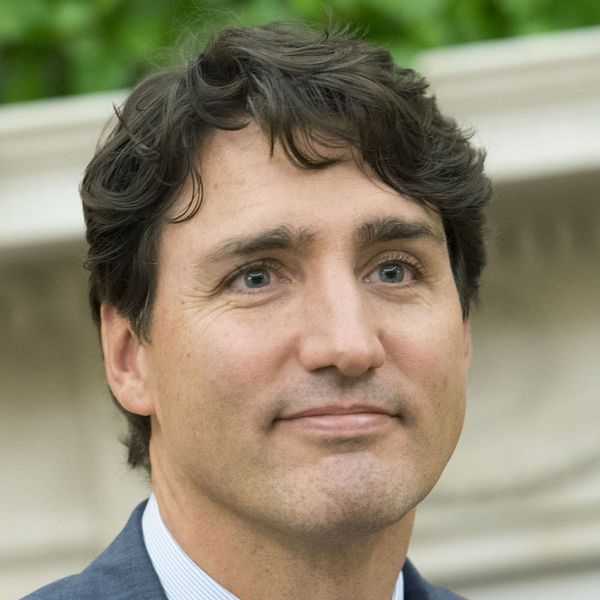 The 46-year-old showed up to the nonprofit foundation in Davos, Switzerland, for a panel talk on “the importance of education in empowering women” alongside Nobel Peace Prize winner, Malala Yousafzai, Italian physicist Fabiola Gianotti, and American-Israeli corporate strategistl Orit Gadiesh.

This morning at #WEF18 in Davos, I joined @Malala, Fabiola Gianotti, and Orit Gadiesh for a panel discussion on the importance of education in empowering women & girls. pic.twitter.com/Z2dLVBuUWZ

While their discussion was an important one, to be sure, it seemed to be the PM’s socks that stole the show on the style front, with Trudeau sporting a pair of highly noticeable royal purple ones emblazoned with… rubber duckies!?

Lest you thought your eyes were deceiving you, look again — those are indeed ducks on the politician’s tootsies.

The move proved too much for the internet to handle, with one camp less than amused by the attention being drawn to the world leader’s ankles, and others HERE for the *lewk,* taking to social media to sing his praises.

Dunno if Owning The Same Socks As Justin Trudeau is a LinkedIn-eligible skill, but I’m going to try pic.twitter.com/s6Bkn4zt5r

Justin Trudeau in duck socks is my new mood pic.twitter.com/LpRALXtlcb

For those that aren’t familiar, Trudeau has a history with expressing himself via his sock choices — just several days prior, he donned a light blue polka pair with serious flair.

Back in September, he struck once more when he clad his extremities in a pair of Chewbacca socks while attending the inaugural Bloomberg Global Business Forum.

Hey, do you, Trudeau!

What do you think of Prime Minister Trudeau’s footwear choice? Share over @BritandCo.

Nicole Briese
Nicole is the weekend editor for Brit + Co who loves bringing you all the latest buzz. When she's not busy typing away into the wee hours, you can usually find her canoodling with her fur babies, rooting around in a bookstore, or rocking out at a concert of some sort (Guns N' Roses forever!). Check out all her latest musings and past work at nicolebjean.com.
Celebrities
Celeb Style
Celebrities Celebrity Style