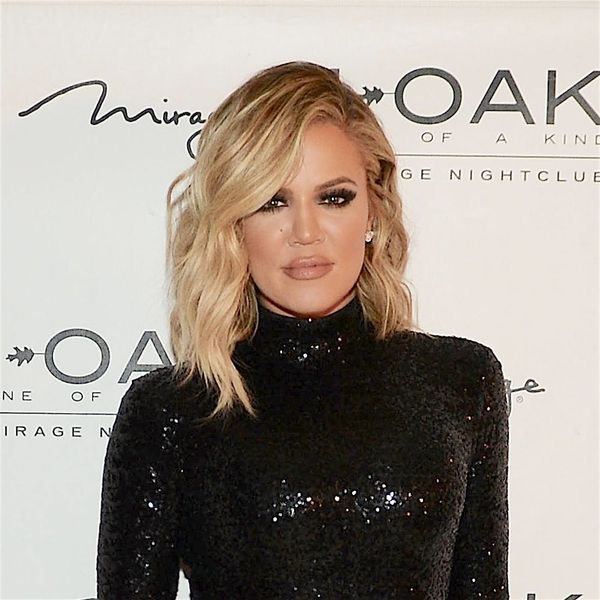 The Kardashians and Jenners are no strangers to causing buzz with their Instagram pics — from Kim’s nudes to Kendall’s hair, they’re used to having their photos talked about, tweeted about and commented on. But this time, Khloé’s pic has caused a buzz for a completely different reason. A snap from her current trip to Cuba has started some serious controversy.

“Havana CU” the photo was simply captioned, with Khloé posed in a light-colored wide-brimmed hat and matching form-fitting dress. Stilettos and a wrap finished off the outfit, which appeared to be her look during a night out. Leaning against a wall with a leg up and a quirk to her hip, it wasn’t the seductive pose or fashion choice that peeved off some peeps. Instead, it was the fact that Khloé was posing against a wall blatantly blazoned with the name FIDEL. Yes, that of former Cuban president and dictator Fidel Castro.

There is further script higher above that isn’t possible to clearly read, but fans and foes felt like they got enough of the message, whether Khloé intended for there to be one or not. Comments left ranged from accusing the reality-star of ignorance to, well, far nastier things.

He's also had a lot of people killed and is a massive human rights violator but hey, viva! @khloekardashian

@khloekardashian the name you're standing under is the reason why a lot of my family in Cuba is living in poverty. por favor edúcate.

One tweet pointed out, “He’s also had a lot of people killed and is a massive human rights violator but hey, viva! @khloekardashian” while another comment on the reality star’s pic read: “@khloekardashian the name you’re standing under is the reason why a lot of my family in Cuba is living in poverty. por favor edúcate.”

One user just wasn’t having it AT ALL, posting, “I literally reported @khloekardashian picture with ‘Fidel’ for ‘hate speech and symbols’” while another commenter tried to get Khloé to understand (with an added insult) commenting, “Maybe she would feel differently if someone took a picture under the perpetrators of the Armenian Genocide all because it’s ‘trendy’ and ‘cool’ to visit… But she’s a Kardashian, we can’t expect her to be educated… And stuff. But hey, nice filter(?)”

With everyday, my goal is to expand my mind. Now, it has been filled with new memories and knowledge of culture, food, traditions, daily life.... It will never go back to yesterday's dimensions! I'm so blessed to be able to appreciate another's culture 🙏🏽 God is GREAT! Thank you for my opportunities 💋

Yikes. So far Khloé hasn’t addressed the controversy, though she did post a photo on her Instagram with the caption: “With everyday, my goal is to expand my mind. Now, it has been filled with new memories and knowledge of culture, food, traditions, daily life…. It will never go back to yesterday’s dimensions! I’m so blessed to be able to appreciate another’s culture. God is GREAT! Thank you for my opportunities.”

Hmm… perhaps Khloé should stick to pics of her workout and sister hangs for a little while.

What do you think about Khloé’s pic? Tweet us @BritandCo!