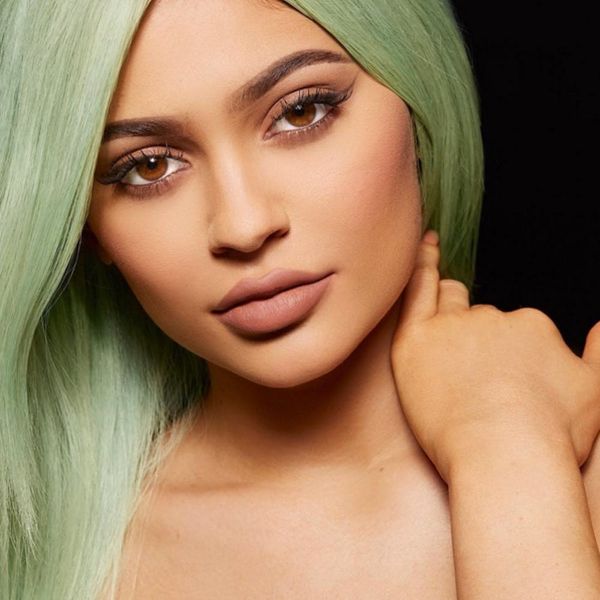 Kylie’s Lip Kit has been creating quite a buzz ever since it first launched back in November. The three ’90s-inspired shades included in the initial collection sold out immediately (because duh). While you might still be waiting for your shipment, Kylie is already moving on to bigger and better colors.

The 18-year-old beauty entrepreneur has been teasing new shades of the lip kit ever since the start of the new year, but this morning she actually gave us a first look. In an Instagram snap, she shared this image of matte pink lips alongside the caption, “Very excited to share with you one out of three of my new colors for my valentine collection coming up. I’ve been working on a new very exclusive formula that I have absolutely fell in love with.”

The shade is drastically different from the muted brown tones included in her first collection. It’s a little hard to tell just how perfectly pink the color is when it’s not next to a skin tone, but from the looks of this photo, it’s something akin to Crayola’s infamous “Tickle Me Pink.”

In fact, if you have a catchy name for the shade, don’t just tell your friends — tell Kylie. Over on the official Instagram channel for the beauty product, Kylie writes, “I need your help on picking a name for this beauty! Comment below what you think this lip kit should be named and I will pick one!” So far people have suggested names like: Kandy Krush, Sweet Valentino, Blushing All K Long and Konfetti K – basically, if there is a word that can be altered to include a K, it’s probably in one of the 40.5K comments the photo has already racked up since last night. Looks like Kylie has some reading to do.

Kylie’s come up with a name. (Posie K.) That was fast!

What krazy name did you think of for this new shade? Share your suggestion with us on Twitter @britandco.

Cortney Clift
Cortney is the senior writer and special projects editor at Brit + Co. She typically covers topics related to women's issues, politics, and lifestyle. When she's not buried behind her computer you'll find her exploring New York City or planning her next big adventure.
Beauty News