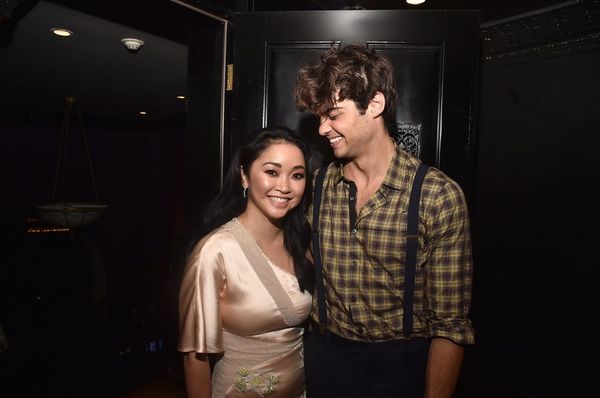 Lana Condor and Noah Centineo had amazing natural chemistry in To All the Boys I’ve Loved Before. It was so good, in fact, that they actually made a real-life pact not to act on it off-screen and ruin their working relationship.

“We had just come back from a hot yoga class and went to his apartment and we ordered pizza. And it was kind of like, oh, hot yoga, pizza, what’s happening?” Condor recalled to Jimmy Fallon on the Thursday, January 10, episode of The Tonight Show.

“It was right before we shot the movie, just trying to get to know each other, and I felt something!” she admitted. That’s when she knew she had to shut it down. “I looked at him and I was like, ‘Noah, it’s not going to happen between us.'”

In the film, Condor and Centineo’s characters team up to pretend to be a couple to make the real objects of their affection jealous. They write a contract establishing the rules and boundaries of the fake relationship, only to end up actually falling for each other. Like Lara Jean Covey and Peter Kavinsky, Condor and Centineo had a spark — but unlike their on-screen alter egos, they decided not to turn it into more.

“I felt that, for the [movie] to do well, we had to be best-friend professionals,” Condor reasoned to Fallon. “And so I was like, ‘It’s just not gonna happen.’ And he was like, ‘Yeah, it’s not gonna happen.’ … So we kind of did what we did in To All the Boys movie. We kind of made a contract and set boundaries.”

The decision turned out to be a good one. The rom-com was a smash hit for Netflix, and Condor and Centineo are starring in a To All the Boys I’ve Loved Before sequel. And since they never crossed that line, there will be no awkwardness on set.

But what about the chemistry that made the movie so special in the first place? “We still have that spark, absolutely,” Condor, who is happily coupled up with Anthony de la Torre, assured Fallon. “We were just on the phone the other day just talking about the sequel.”

Are you excited for a TATBILB sequel? Tell us @BritandCo!