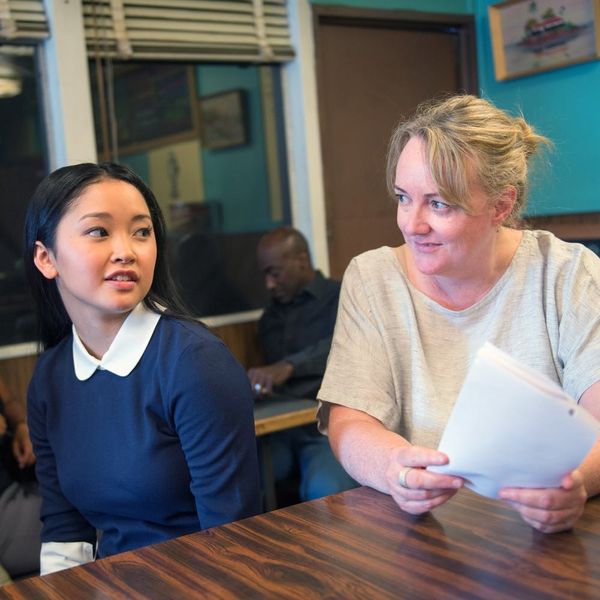 Netflix has been on a roll with rom-coms lately, and its latest offering, To All the Boys I’ve Loved Before, might be its most charming yet. The movie, which is based on Jenny Han’s YA novel of the same name, stars Lana Condor as a high school student who is forced out of her shell when the love letters she wrote to her crushes are sent without her knowledge. Noah Centineo — who will appear in another Netflix film, Sierra Burgess Is a Loser, in September — plays one of those crushes, and his chemistry with Condor is the stuff of rom-com dreams.

They’re so good together, in fact, that director Susan Johnson was moved to tears as she watched them film one particularly pivotal scene in the movie. Read on to find out more about that scene, Johnson’s personal favorite rom-com, and how she tapped into Han’s fan base to bring the book to life.

Susan Johnson: I hadn’t read the book, so I got to read the script with fresh eyes, which is always how I like to do it. It’s better to go in just letting something wash over you and get a feel for whether you can connect with the material. In this case, obviously, I did. I really loved it. And then I read the book shortly before we filmed.

I did a lot of research coming into it too. The fan base is so big and so vocal, so present online, so I researched what different people were connecting to in the book, and that was helpful in forming my vision of what the movie should be.

B+C: Turning a book into a movie seems like it would be so tricky, because, as you mentioned, people have all these ideas in their heads of how it should look and what the characters should be like. Did you feel any extra pressure because of that?

SJ: I did. You do in prep. I try to do as much research as I can, and then a couple of days before we start shooting, I just stop all social media, because it can get super confusing. You want to honor the fans, but also, you want to tell the story how you see it. So I just had to start making choices based on what I was responding to as a viewer and as an artist. I also had a great assistant on this movie who was sort of my touchstone. Occasionally, I would go, “You know, remind me, in the book, or online, what’s being said about this particular moment?” And she would always have the right answer, which helped me really stay on track. Jenny was there for a good portion of it, too — always go to the source. She was great and supportive and helped us with everything from set decoration to wardrobe.

B+C: What part of the story did you most connect with?

SJ: I love the idea of facing your fears. If I say it to myself every morning, I have a better day. I have a tendency to be that girl that stays on the couch and watches movies because it’s safe and it’s my domain, and that’s a pretty boring life. So I really responded to that specific line: “Face your fears.” I think it’s important for all ages and all parts of your life. It’s important to branch out and make new friends and experience life every day. I think that’s a really beautiful part of this movie. The script felt very joyful, as did the book, and I hope that the movie feels that same way for everybody.

B+C: Do you have a favorite scene in the movie?

SJ: My favorite scene in the movie is at the diner after the party. I just love that scene, and I love how [Lana Condor and Noah Centineo] played it. I love watching them, as actors, go full circle: They start with their guard down, and by the end of it, she’s put her guard back up because she’s had this moment of real truth with him. It was her chance to reach out and be honest and truthful, and it sort of slapped them both in the face. At that moment, you know that there’s a connection, and it’s a true connection. I love that scene. I loved shooting it — I was in tears on set.

B+C: Lana and Noah have such great chemistry. Was it like that from the very beginning with them?

SJ: Yes! We sort of narrowed it down to five actors for each role, and then we mixed and matched them, and when we put Lana and Noah together, it was just magic. And Lana and Israel [Broussard, who plays Josh] — they’re all really brilliant in the room together. It’s always exciting — that part of making any movie, when you watch that happen, because it’s natural. You can’t force it, you can’t create it if it doesn’t exist.

SJ: My high school experience was a good one, because I had a great boyfriend, who I called in the process of doing this film and said, “Just want you to know this film’s coming out, and you’re going to recognize yourself in it a little bit.” We did the one thing you’re not supposed to do, according to Margot and Lara Jean’s mom — we went to college together. That maybe wasn’t the best idea. But [making the film] made me reminisce, in a good way, just about that first love and what that feels like and learning to trust yourself and trust other people. I had a good high school experience — I had great teachers and great friends. I’m actually still friends with my whole clique from high school 20 years out.

B+C: Do you remember your first crush?

SJ: I do. I was 10. And it was a kid I met at church. And then I liked his best friend too, who was also at church. That was a disaster at 10. That can’t happen. But I remember it well — we would go skateboarding. And if you held hands, that was a cool, huge moment. Letter writing was a big part of it. Going to movies was a big part of it. There’s an innocence to it that, I think, for me, stays with you forever. If you can really tap into what that felt like the first time, you can get back to that moment really easily.

B+C: Did you have any rom-coms in mind as you were making this movie?

SJ: I did. My favorite movie is way back in the black-and-white world — The Philadelphia Story, with Katharine Hepburn and Jimmy Stewart and Cary Grant. Again, two guys and a girl. I love the pacing and the dialogue and the missed opportunity and the brightness of Katharine Hepburn, and I think Lana has that. She’s such an intuitive actress, and she’s such a genuinely beautiful, kind person who is also figuring out her place in life, so she allows us to watch her sort of go through that as Lana and as Lara Jean in the movie. I think that’s sort of priceless.

B+C: What advice would you give to other aspiring directors — particularly women?

SJ: My advice is just to keep your head down and keep working. Try to work every day. It doesn’t matter if you take your cellphone out and shoot a car going down the street, or if you watch documentaries on filmmaking, or if you go to film school. Whatever your art is, just keep doing the work. It’s all cumulative. You can’t hear the word no, you can’t pay attention to the negative. You have to just focus on who you are as an artist and have the confidence to tell your story, and if you tell your story, it will resonate with other people, because it’s truth.

To All the Boys I’ve Loved Before is streaming now on Netflix.