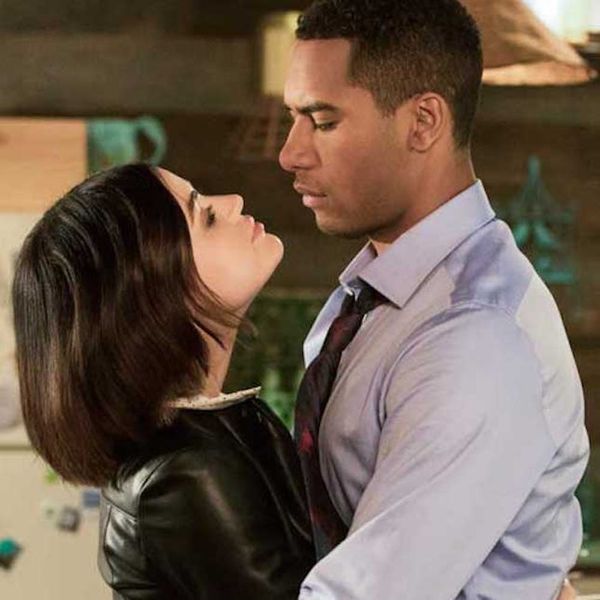 Life Sentence takes a hard look at Stella (Lucy Hale) and Wes (Elliot Knight) in “Wes Side Story,” which has been coming since she first discovered their happily ever after is now a lot longer than either of them thought it would be when they first got married.

The bombshell that drops into the marriage is Wes’ ex-fiancee Pippa (Rana Roy), who shows up on Wes’ doorstep. She’s looking for forgiveness for leaving him at the altar, though over the course of the episode it comes out that he was in Paris immediately after being jilted (on their honeymoon, sans new wife), and when Pippa realized she had made a mistake, she came to Paris to the restaurant where they had had a reservation for months. But Wes had just met Stella and they were using the reservation, so Pippa left.

This all comes as a huge shock to Wes, who thought Pippa had simply ditched him and never responded to any of his calls or texts. Naturally, this does not sit well with Stella, because it makes her feel like a rebound and also because now she wonders if Wes regrets how it all happened.

Wes, being the good guy that he is, tells Pippa that he forgives her but that they can’t be in each other’s lives anymore. He says he’s in love with Stella, and Pippa isn’t his person anymore.

Of course, while all of this is happening, Stella goes to the hospital to think and runs into Dr. Grant (Riley Smith), who is working on getting Sadie (Nadej Bailey) into a new chemo trial. In a previous conversation, he said he was sorry if his comment about meeting Stella before she was married was inappropriate, and all I could think was, “‘If? If it was inappropriate? It was super inappropriate, especially if you want to keep having a professional relationship with Stella.”

She begs off and tells him it’s fine, but she really should have told him it wasn’t appropriate and he needs to figure out how to behave like an adult.

For now, though, she seems committed to Wes. I have high hopes after they exchange “I want to be heres” at the end of the episode, but we’ll see.

Meanwhile, it comes out that Lauren (Bre Blair) has slept with both Aiden (Jayson Blair) and Peter (Dylan Walsh), so that’s fun and hilarious. But the bigger concern is that Lauren outs Aiden’s pill-selling business, and his parents are rightly very concerned about the way their son has been supporting himself. Peter and Aiden come to an understanding at the end of the episode and perhaps Aiden will actually become an EMT. He certainly needs some direction in his life, and that’s not a bad way to go.

Also, this was laugh-out-loud hilarious:

Peter: “When did our kids start protecting us?”

Ida: “Probably when I started drinking vodka in a bush and you started sleeping with the same woman as our son.”