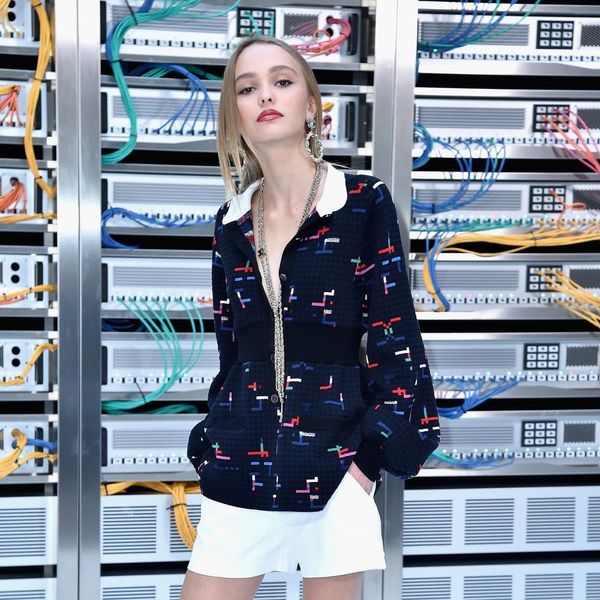 She may only be 17, but Lily-Rose Depp is well on her way to becoming a household name. With parents like Johnny Depp and Vanessa Paradis, there was no way she could ever fly under the radar, but the burgeoning actress is garnering plenty of attention on her own. Though not even of voting age, Depp has become a fixture on the Chanel runway (she is also the star of the label’s beauty campaign) and landed roles in a handful of films that have premiered at the Sundance, Cannes, and Venice Film Festivals.

Stacked resume aside, the Franco-American model and actress is becoming well-known for her off-duty style — a seriously chic fusion of French-girl-fierce, ‘90s grunge, and RN cool (think: perfectly coiffed don’t-care hair, velvet chokers, crop tops, ladylike heels, and tweed). And with Karl Lagerfeld as a close family friend, best believe Chanel classics count themselves among Depp’s closet staples. Here, a look at all the reasons she’s our go-to for sartorial inspiration.

1. She makes the two-piece chic. Depp made waves during her first public appearance at the Chanel Paris-Salzburg Metiers d’Art show in March 2015, rocking an embellished Chanel matching set. Shimmery mint colored sequins, floral details, and a matching choker were the picture of modern elegance. (Photo via Dimitrios Kambouris/Getty)

2. She goes bold with a bodysuit. Owning a strapless bodysuit isn’t the easiest look to pull off, but Depp proved that the style can be both sophisticated and chic at the Chanel SS16 show in Paris. A petite chignon, classic cat eye, and strappy heels dress up the otherwise laid-back jeans and graphic bodysuit combo. She rounded out the look with a sleek Chanel clutch and cropped fur coat for extra oomph and class. (Photo via Rindoff/Le Segretain/Getty)

3. She makes white wearable. To attend her very first Met Gala, Depp rocked — what else — Chanel haute couture. This is not a drill. She paired the embroidered tweed halter dress with a handmade bomber jacket worn off-the-shoulder style, in true It-girl fashion. To keep the focus on the fab frock, she kept the accessories simple, pairing the OMG-worthy ensemble with a classic pendant necklace and gold ankle-strap heels. (Photo via Venturelli/FilmMagic)

4. She knows comfort is king. While we love the glam gowns that grace the Cannes red carpet just as much as the next gal, it’s the low-key getups that truly make our hearts go all aflutter. The IRL appeal is legit. Her Chanel sweatshirt and matching shorts were a refreshing step away from frilly dresses and flouncy feminine skirts. (Photo via Venturelli/WireImage)

5. She’s not afraid to take a risk. As far as Cannes red carpets go, the fashion is almost as important as the films themselves. Depp brought her A-game to the event, stepping out in an off-the-shoulder Chanel gown with a crop-top bodice and a sheer pleated skirt. Gilded embellishments, a gold choker, and matching kicks delivered plenty of wow-factor without going over the top. (Photo via Anthony Harvey/FilmMagic)

6. Her LBD is DDG. The Planetarium starlet did her best Audrey Hepburn for the 73rd Venice Film Festival, strutting her stuff in a retro LBD and sculptural pumps. Bombshell waves and a dramatic cat eye emphasized the ensemble’s ’50s flair. (Photo via Venturelli/WireImage)

7. She embraces embellishments. Depp is a master at making Chanel feel super casual. Her signature move involves pairing hot-off-the-runway styles with everyday basics like t-shirts, jeans, and sneakers. For the launch of her Chanel beauty campaign, the actress wore an embellished midriff-baring jacket with leather-look jeans and a gold chain belt with major ‘90s throwback appeal. (Photo via Stefanie Keenan/WireImage)

8. She makes shorts sophisticated. Girl knows how to make a simple pair of shorts feel incredibly chic — an item that even the most fashion-forward celebs and street-style stars have a hard time pulling off. Teamed with a graphic blouse, lariat necklace, and t-strap sandals, the summertime staple took on a totally haute ‘tude. (Photo via Pascal Le Segretain/Getty)

9. She loves a disco moment. Slay, girl, slay. Depp’s play on the classic tux has a touch of ’70s glamour that we just can’t get enough of. Like, who doesn’t love a good glitter-flecked bodysuit? Best believe we’ll be bookmarking this one for an upcoming GNO or date night. (Photo via Thomas Samson/AFP/Getty)

10. She knows a tux is always appropriate. Forget tees and jeans — every wardrobe requires an iteration of Yves Saint Laurent’s Le Smoking. Depp tapped into her inner French girl for the Cesar Revelations 2017 with a sassy tuxedo, unbuttoned button-down, loose tie, and playful pink pumps. This look is the ultimate office-to-after-dark solution, allowing you to keep it classy by day and turn up the heat for after-work rendezvous. (Photo via Francois Durand/Getty)

11. She plays with proportions. Proving that anytime is a good time to bust out a jumpsuit, she attended the Sidaction Gala Dinner during Paris Couture Week in this sleek silver stunner and a velvet crop jacket. The pedal-pusher silhouette gives the outfit a fun, youthful feel, while a bold red lip puts out some serious bombshell vibes. (Photo via Laurent Viteur/Wire Image)

Libby MacCarthy
Libby MacCarthy is an urban planner turned writer with a love (bordering on unhealthy obsession) of all things fashion and beauty related. She lives for perfectly brewed coffee, farmer's markets, dinner parties and perusing impeccably designed boutiques. When she's not on the hunt for the latest trends, you'll likely find her plotting her next adventure or nose deep in a book. Libby currently splits her time between the East Coast and her adopted home of France. Follow her daily adventures on Instagram.
Celeb Style