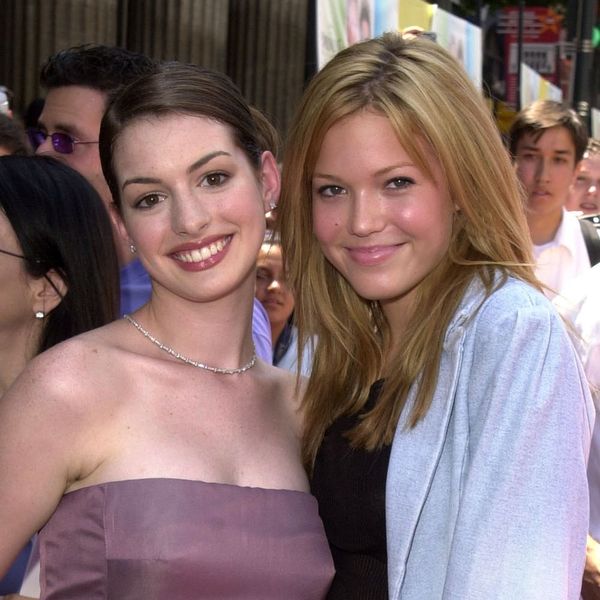 It’s no secret that Mandy Moore is the queen of #TBT on Instagram, and her most recent post will have you feeling all kinds of nostalgic. The This Is Us star shared a memory from the Princess Diaries red carpet in 2001, which got costar Anne Hathaway reminiscing about the event, too.

“I guess this film came out just over 17 years ago??” Moore posted in disbelief on Thursday, August 24, sharing a photo of herself and Hathaway at the film’s premiere. “@annehathaway was already a movie star and I showed up to my first premiere in a casual denim suit. Hey, it was 2001! #tbt#theprincessdiaries”

Hathaway later jumped into the comments section with her own perspective on the nostalgic snap. “That’s the face I make when I’m trying not to flop sweat on a terrifically famous pop star,” she joked. At the time, Moore had just released her third album and was riding high on the success of 2000’s I Wanna Be With You.

Hathaway then turned things back to the present-tense, sending her former costar some love. “So happy for all that you have going on! Let’s get together and throw ice cream at each other soon,” she wrote, referencing the classic Princess Diaries scene in which her character, Mia, smeared ice cream on Moore’s character, Lana.

Moore was all in. “It’d be an honor to be coned by you again!” she replied. Obviously, we are totally here for a Mia and Lana reunion.

This isn’t the first time Moore has gotten wistful over her Princess Diaries days. Earlier this year, she shared a snap from set with costars Heather Matarazzo and the legendary Julie Andrews. As in her most recent throwback, the actress is often hilariously self-deprecating over her flashy early-aughts style, making the look back at the old pics even better.

Would you like to see Mandy Moore and Anne Hathaway get together and relive the Princess Diaries days? Let us know @BritandCo!