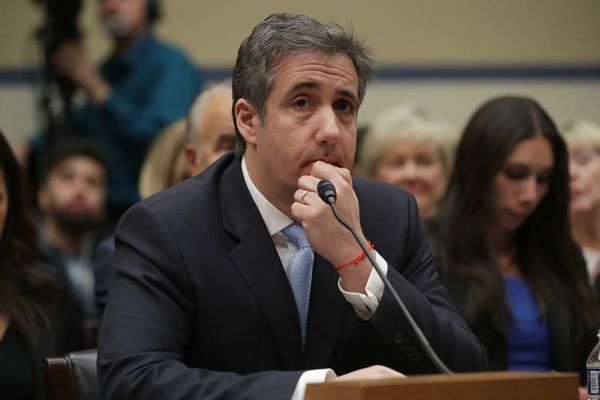 President Donald Trump’s former lawyer Michael Cohen appeared before Congress on Wednesday, February 27, setting off what may become a tumultuous few days in Washington. At around 10am ET, he began reading a prepared opening statement in which he detailed his alleged dealings with Trump, whom he called “racist” and “a con man.” As part of his testimony, he is also fielding questions from the House Oversight and Reform Committee. Here are some of the key takeaways so far.

Cohen’s opening statement — released Tuesday evening to several news outlets — included claims that the president was aware of and signed off on hush money payments; that he heard from Roger Stone about the planned Wikileaks release of emails damaging Hillary Clinton’s campaign; and that he “ran for office to make his brand great, not to make our country great.” Cohen also said in the statement that although he does not have “direct evidence” of collusion with Russia, he believes (based on an exchange he says he witnessed between the president and his son) that Trump knew about Donald Jr.’s meeting in Trump Tower in June 2016.

In other Russia-related news, Cohen said he previously lied to Congress about when negotiations over the Moscow Tower project ended. He clarified that Trump did not explicitly tell him to lie but “made clear” in other ways that “he wanted [Cohen] to lie.”

“I am ashamed of my weakness and misplaced loyalty — of the things I did for Mr. Trump in an effort to protect and promote him,” Cohen said. “I am ashamed that I chose to take part in concealing Mr. Trump’s illicit acts rather than listening to my own conscience. I am ashamed because I know what Mr. Trump is. He is a racist. He is a con man. He is a cheat.”

On the topic of racism, Cohen alleged that the president privately made offensive comments that included calling Black people “too stupid” to vote for him and asking if Cohen could name a country with a Black leader that wasn’t a “sh*thole.”

Along with his testimony, Cohen provided copies of signed checks that he said were reimbursements for hush money payments he made on behalf of the president. He also offered what he said were financial statements illustrating that Trump inflated or deflated his assets to his personal benefit.

Throughout his opening statement, Cohen expressed regret and admitted that he made dire mistakes by remaining part of Trump’s inner circle. “I see now that my ambition and the intoxication of Trump power had much to do with the bad decisions I made,” he said toward the end of the 20-page prepared testimony. “To you, Chairman Cummings, Ranking Member Jordan, the other members of this Committee, and the other members of the House and Senate, I am sorry for my lies and for lying to Congress.”

In response, Republicans on the committee challenged his trustworthiness and credibility, noting that he previously pleaded guilty to lying to Congress and would soon be in prison. Democrat Debbie Wasserman Schultz, on the other hand, said she believed Cohen’s testimony.