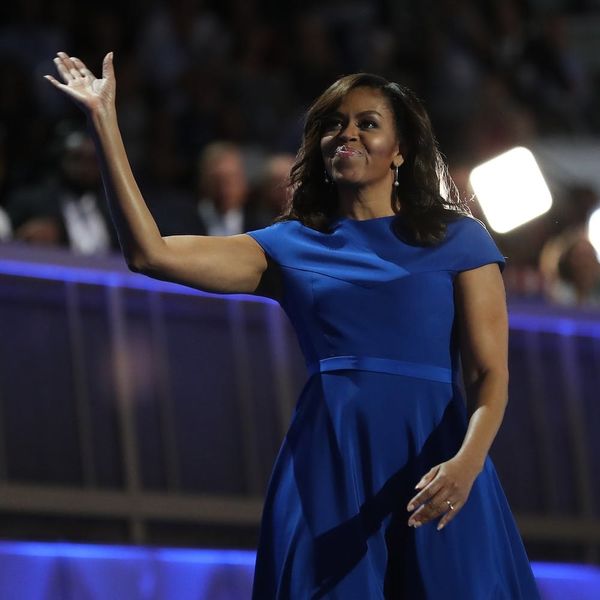 As Michelle Obama proved earlier this week with her amazing speech at the Democratic National Convention, the woman can do no wrong. She is already the coolest First Lady ever — with her ability to sing along to Beyoncé and her fluency with Snapchat — and the last eight years have shown that she might very well be the best-dressed, too.

1. Thakoon, Democratic National Convention, 2008: This is where the fashion world’s love affair with Michelle Obama started. Her husband is the first African-American presidential nominee for a major political party in the US, and she steps out in a dress that is not stereotypically First Lady-esque. Not only were there no pastels or stiff fabric in this knee-length number, Michelle chose a kimono-style dress from a designer with a textured history, just like her husband. Thakoon Panichgul was born in Thailand and moved to Omaha, Nebraska when he was 11. Beginning as a fashion writer, he moved over to making ready-to-wear clothing in the early 2000s, and was singled out by the fashion press as a new generation of American designers. (Photo via Joe Raedle/Getty)

2. Narcisco Rodriguez, Election night, 2008: Everyone had something to say about this dress. Whatever the criticism, one thing was certain: It was black and red, unapologetically bold, and the message was clear: “We are different.” Is it a coincidence that the dress was the brainchild of Narcisco Rodriguez, a fashion powerhouse whose parents were Cuban immigrants? Maybe. Narcisco Rodriguez has remained a favorite of the First Lady throughout the years, and his work has made multiple appearances in her wardrobe. (Photo via Joe Raedle/Getty)

3. Jason Wu, Inauguration, 2009: Jason Wu, a Taiwanese-born designer who moved to Canada when he was nine, created this one-shoulder chiffon white gown that is now on display at the Smithsonian. While he was not a total unknown in fashion circles before 2009, 27-year-old Wu became a household name when Michelle and her husband took the first dance as the First Family. “Thank you for your vision and for your hard work,” Michelle said to Wu in a speech in 2010 during the Smithsonian’s unveiling of the gown. “This day is… about how, with enough focus and with enough determination, someone in this room could be the next Jason Wu. Someone in this room could be the next Barack Obama.” (Photo by Mark Wilson/Getty)

4. Jason Wu, Inauguration, 2013: The First Lady appears to be someone who believes in sequels. While most predicted blue — her outfits earlier in the day were cooler and darker in tones — Wu went with a bold ruby gown to signal confidence. Indeed, the Obamas were now basking in the victory of their second term, and Michelle’s dress showed that she can still surprise. (Photo via Chip Somodevilla/Getty)

5. Alexander McQueen, China State Dinner at the White House, 2011: This resplendent, fiery-red evening gown was one of the rare fashion missteps of Michelle. The color red symbolizes good luck in Chinese culture and could have been viewed as a favorable gesture for US-China relations. This was also a McQueen piece designed by Sarah Burton a year after Alexander McQueen’s tragic suicide, and it could have been a sign of support for the grieving fashion house. But American designers saw it only as a slight. “Our First Lady Michelle Obama has been wonderful at promoting our designers, so we were surprised and a little disappointed not to be represented for this major state dinner,” said Diane von Furstenburg, president of the Council of Fashion Designers of America, in a statement. If one ever had any doubt that fashion is part of the theater of politics, this diplomatic kerfuffle certainly showcased a clear answer. (Photo via Win McNamee/Getty)

6. Vera Wang, China State Dinner at the White House, 2015: It appears that the administration learned its lesson from the last State Dinner, because this time Michelle appeared in a black gown by Vera Wang. The designer of an established fashion house on New York’s famed Seventh Avenue, Vera was born in New York City and raised by Chinese immigrant parents from Shanghai. It might be a “safe” choice for a gown, but it still retained an interesting background. (Photo via Ron Sachs-Pool/Getty)

7. Narcisco Rodriguez, State of the Union, 2016: Michelle returned to one of her favorite designers for her husband’s final State of the Union address. This dress may have a simple cut, but the marigold provided a welcome pop of color amid the dark blues and blacks in the room of panning cameras. With that shade, Mrs. Obama basically became the personification of optimism, and there is no way it was a coincidence that she wore Cuban-American Narcisco Rodriguez’s design for this widely televised event — especially as relations between the US and Cuba were warming after the lifting of sanctions the year before. (Photo via Chip Somodevilla/Getty)

8. Christian Siriano, Democratic National Convention, 2016: At first, this dress — with its American flag-like shade of blue — registered as a safe choice for her speech earlier this week at the DNC. But once you take into account that it was created by Christian Siriano, the narrative behind the dress completely changes. Siriano — who we can safely say is the most successful designer to come out of Project Runway — was most recently in the news for volunteering to design Leslie Jones’ gown for the Ghostbusters premiere after she called out the fashion industry. He has also collaborated with Lane Bryant for a collection and is a gay rights activist, making him a name synonymous with celebrating inclusivity and diversity. After all, “When they go low, we go high.” (Photo via Joe Raedle/Getty)

Which are some of your favorite looks of Michelle Obama, and what do you think they mean? Tell us @Britandco!