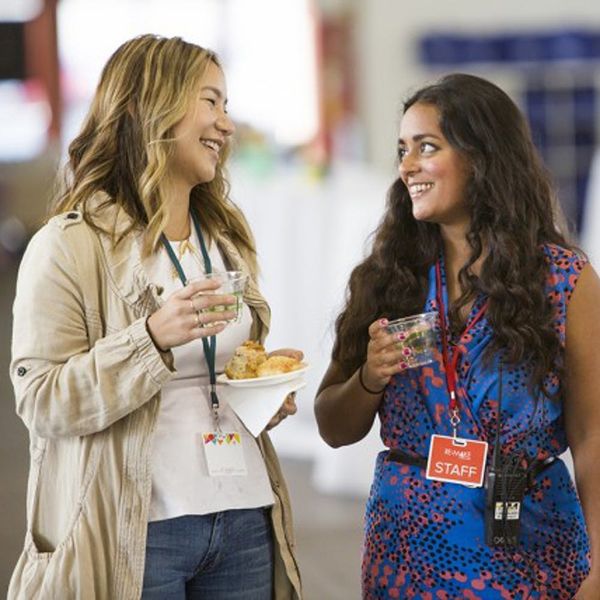 Networking is a great way to meet new people and create bonds that can transcend your professional and personal lives. But shining like Sasha Fierce in a room full of strangers while reciting your elevator pitch can feel overwhelming. If group situations are not your thing, don’t rule networking out yet. Instead, try meeting with people one-on-one over a meal or drinks (yes, coffee and tea count!). These meetings allow for deeper and more focused conversations than the standard networking event. To get the scoop on how to have a succesful one-on-one networking meeting, we turned to career coach Ashley Stahl.

Ashley helps clients overcome their fears and create authentic career paths that make it easier to answer the most popular of networking inquiries, “So, tell me about yourself.” She’s also a fearless networker in her own right. One of Ashley’s most memorable networking experiences was meeting with the Head of Nuclear Weapons for the National Security Council in the White House during her time working in foreign policy. “She was on a panel, and I fearlessly went up to her, with the intention of having a coffee. It was profound to learn about her work, and I felt empowered by what would be possible for me in the same arena,” says Ashley. Like we said, she’s the perfect person to turn to for networking advice!

1. Make it easy for your guest. When inviting someone to meet up, make it as convenient as possible for them, so the opportunity to meet with you feels like a no-brainer. “The easier you make it for people to meet you, the better the results you’ll get. I always let someone know I can see them at their convenience, at a location they choose,” says Ashley.

2. Project a positive energy. In most situations, it is not about what you say, but how you say it. In written correspondences like email, tone and intent are key. “The energy of the email is everything,” says Ashley. “If it doesn’t feel like a balanced experience for me, or if the person starts off our relationship by trying to ‘take’ through email, I have no desire to sit down with them and endure the rest of that. It’s important to find the point of synergy you have between you and the person you’re speaking with.”

3. Ask meaningful questions. Ashley believes getting to know the other person is key to hosting a conversation that digs deeper than just “small talk.” “I’d ask questions about who they are and how that inspired them to do what they’re doing in the world,” she says. “You never want to get too personal, but it’s impactful to make a point to get to know the big “WHY” and why the person is doing the work they are. People feel seen when you connect at that level.”

4. A simple “thank you” will take you far. After paying for the meal or drinks (Yes, that’s on you as the host to take care of, says Ashley), wrap up the conversation with a simple thank you. During this time, let the person know that you hope to be a resource for them in the future and encourage them to reach out to you if they ever need anything. Remember, while networking, you should “give” as freely as you “take.” Ashley also suggests following-up via email. “If they offered to help you in some way, using the thank you email as a reminder is a powerful channel to remind them how they specifically offered to support you,” she says.

We want to hear from you! Tell us about your most memorable one-on-one networking experience in the comments below. And if you’re looking to positively boost your job hunting mindset, check out Ashley’s free career success kit at www.ashleystahl.com.