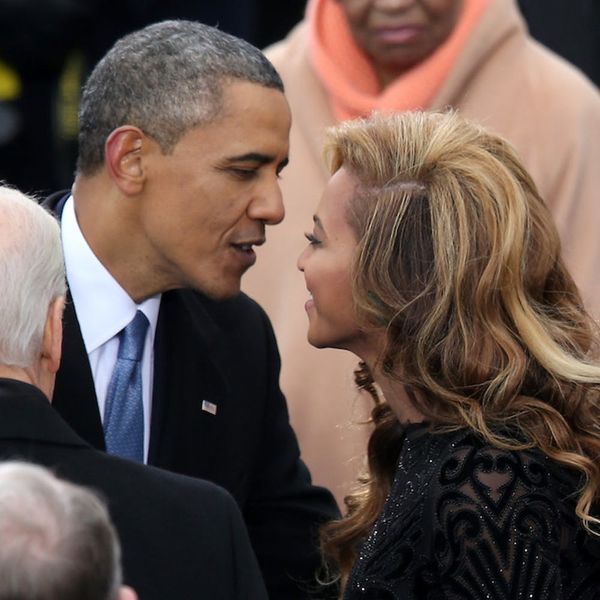 Obama’s dropping hints and Lorde makes a confession in this morning’s top news stories. Check out those and more below in Friday’s Morning Buzz!

1. Yesterday, Jay Z became the first hip hop artist to be inducted into the Songwriters Hall of Fame, and the honor came with a personalized video message from none other than Barack Obama. In the speech, Obama talked a lot about his and Jay’s friendship, pointed out how much more popular their wives are (LOL), and also maybe dropped a hint about Jay and Bey’s (possibly-already-born?) twins. “Jay and I are also fools for our daughters, though he’s gonna have me beat once those two twins show up,” he said. It was all the Beyhive needed to completely lose it, assuming he might have accidentally revealed that more daughters are on the way for the rapper. Jay ~mysteriously~ didn’t attend the ceremony in New York City — because he’s in LA where his twin daughters are being born, perhaps!? — and instead tweeted out his acceptance speech, which was a beautiful work of art all on its own.

Just wanted to share that one of the reasons @eatingboys has inspired me so much is because of the way she mixes her humor and sexuality. I spent so many years loving my body but thinking it wasn't lovable by others- its sole purpose was to be fodder for jokes. I performed the insult so no one else could. I don't regret any of it- that's my art and that was my truth- but now, at age 31, having been through hell and back with my health and other people's perceptions of my physicality, I feel deeply comfortable with the idea that this pear-shaped pot of honey is equally good for making people laugh and laying out like a Suicide Girl circa 2004. Love it all.

2. Lena Dunham went all in on body positivity with a (nearly!) nude selfie. Dunham has never shied away from calling out body shaming and the unfair expectations put on women’s appearances, and now she’s proclaiming that she’s “deeply comfortable” with her own body in a new Instagram post. “I spent so many years loving my body but thinking it wasn’t lovable by others,” she writes in the caption. The photo shows Dunham’s naked torso, although she has covered up any potential Instagram-flagging areas with pear and honeypot emojis. “Now, at age 31, having been through hell and back with my health and other people’s perceptions of my physicality, I feel deeply comfortable with the idea that this pear-shaped pot of honey is equally good for making people laugh and laying out like a Suicide Girl circa 2004.” Dunham capped off the post with a simple and resonant, “Love it all.” Preach, girl.

3. Eliza Dushku was the picture of happiness as she announced her engagement. If you’re anything like us, you’re squinting reeeeally hard to try to get a glimpse of a ring, and while we can’t spot one yet, the photo Dushku posted to announce she was engaged to Peter Palandjian is beyond sweet. “YES!! Absolutely, my love,” she captioned the pic of what *might* be a re-creation of a proposal, or might be the real, adorable deal. Congrats to the happy couple!

The true identity of “onionringsworldwide’ has been revealed! #FallonTonight pic.twitter.com/8vDXKORhq7

4. Lorde confessed to running an onion rings review Instagram account. Earlier this week, Lorde fans freaked out when it was revealed she MIGHT secretly be behind an onion ring review Instagram account. Last night, in an appearance on the Tonight Show with Jimmy Fallon, she fessed up: The account is indeed hers. “I naively didn’t realize that it would be a thing that I was going to different places and trying the onion rings at each of those places,” she told Fallon. What she did think it would involve remains a mystery.

5.Y’all, summer can begin now: Shania Twain just released her new single. Ever since Twain revealed she’d be releasing a new album after a 15-year break, we’ve been dying to hear the first single. It’s finally here, and “Life’s About to Get Good” sounds like the old Shania we know and love, despite her fear that she sounded different after long-running voice problems. The song sums up a lot of the personal pain Twain lived through in her time away from the spotlight, but it’s packaged in a positive and uplifting way, making it downright triumphant. Welcome back, Shania!

6. Quote of the day: “I just want to be happy. If that’s me just being myself, then I don’t really care.” In a recent interview with Ryan Seacrest, Selena Gomez dished why she doesn’t hide her relationship with The Weeknd, but we think this applies to all of life, TBH.

Are you your happiest when you’re being 100 percent yourself? Let us know over @BritandCo!