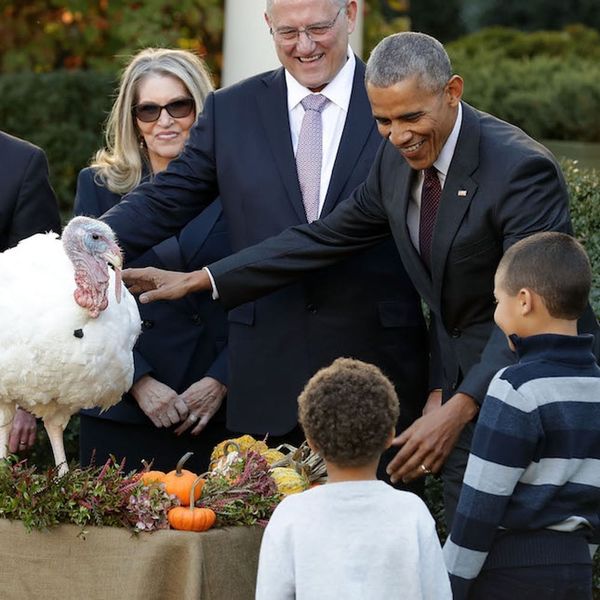 1. Nothing like a good old fashioned Turkey pardoning to remind us just how much we’re going to miss President Obama in the White House! Every year at the traditional Thanksgiving turkey pardoning, Obama tries his hardest to fit in as many dad jokes about turkeys as possible, largely in the name of embarrassing his daughters Sasha and Malia (who couldn’t make it this year), and this year was no exception. Joined by his two adorable nephews, Obama was on FIRE. “I want to take a moment to recognize the brave turkeys who weren’t so lucky, who didn’t get to ride the gravy train to freedom. They met their fate with courage, sacrifice, and proved that they weren’t chicken.” CLASSIC. Watch all of his wonderful puns above.

2. Kanye will remain in the hospital for Thanksgiving and Kim will be right there with him. Kim rushed to be by Kanye’s side as soon as she learned he was hospitalized earlier in the week, and a source has told US that Kim “has barely left his side” since. Turns out that’s exactly where she’ll stay through the holiday, as Kanye is to remain there for the time being. It’s not clear whether their children or additional family has or will be joining them, but either way, it’s amazing to see this support system in place. (Photo via Bryan Bedder/Getty)

3. Holy crap, OK Go’s new video is stunning. No matter what else happens in this topsy turvy world, we know we can always count on OK Go to make mind-blowing new music videos, and the latest for “The One Moment” is no exception. What you see happen throughout the entire video actually only happened within 4.2 seconds, but is super slowed-down and looks unreal. Check it out over at their Facebook page.

4. Mariah Carey finally spoke about her split from James Packer, and it was sorta cagey and sorta salty. Mariah has remained pretty quiet about her split from fiancee James Packer, but on Ellen yesterday, the talk show host managed to get her to open up a little (nothing about the fate of that ring tho). When Ellen brought it up, she noted how Mariah was engaged and trying on wedding dresses on her E! docuseries, to which Mariah replied “Now it’s a whole friggin’ thing,” going on to tell Ellen that “Everything happens for a reason. Things are the way they are.” There have been rumors that the split was because Packer didn’t want to be in the show, and when Ellen asked this, Mariah said, “Allegedly,” before admitting that it was difficult to talk about and changing the topic to the festive decorations on set. Yikes!

Me and my girl

5. Hillary Clinton took the time to chat with supporters and gave them an uplifting message while out shopping for Thanksgiving. The Chappaqua Village market in Chappaqua, NY, was buzzing yesterday as Hillary, Bill, Chelsea and her adorable son were out grocery shopping for Thanksgiving, and store patrons couldn’t help but chat and get selfies. Isaiah Frankel, above, said that his convo with Hillary was short, but that “She said we just have to keep fighting.” Indeed. (h/t Popsugar)

6. Quote of the day: “I am grateful for what I am and have. My thanksgiving is perpetual.” Henry David Thoreau reminds us to give thanks today and every day.

What are you thankful for today? Let us know over @BritandCo.