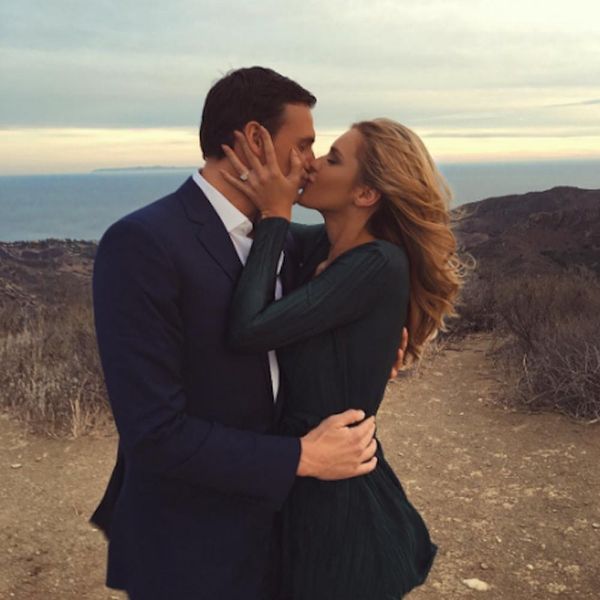 Happy Monday morning, all! From a sweet proposal to Presidential problems, check out six of today’s top news items below.

1. So sneaky of Ryan to run off and get engaged while the rest of the country was totally wrapped up in the Presidential debate! Last night, both Ryan and fiancee Kayla shared photos of the stunning Malibu Canyon lookout where he brought her to pop the question. “Speechless,” Kayla wrote on her photo, which oh-so-subtly shows off her giant sparkler of a ring. “Absolutely beautiful. So in love with YOU.” Wait, is she talking to Ryan, or that ring?

2. We can’t stop laughing at these Clinton and Trump karaoke memes from the debate. Because what would a Presidential debate be in 2016 if not super memeable? Even riiiiight on the heels of a super scandalous weekend for Trump, and in a debate that was wracked with tension from the very start, people will find the lols in the situation. One of our favorites? Taking stills of the two Presidential candidates talking over each other and with Trump lurking creepily behind Clinton and setting the images to different songs, like the above Drake and Rihanna duet “Too Good.” LOL. Never change, Internet.

3. And speaking of Trump’s tape scandal, Billy Bush has been suspended from the Today Show for his involvement. The 2005 footage from an Access Hollywood segment that features Trump’s disgusting comments about women also featured host Billy Bush, and now NBC has decided to suspend his morning show hosting duties to look into the matter further. A memo sent by a show exec to staff that was obtained by US Weekly wrote: “I know we’ve all been deeply troubled by the revelations of the past 48 hours. Let me be clear — there is simply no excuse for Billy’s language and behavior on that tape. NBC has decided to suspend Billy, pending further review of this matter.” (Photo via Cindy Ord/Getty)

I need to tell you a story. With the love and support of my husband, I've decided to share it publicly. A very long time ago I ended a long emotionally and physically abusive relationship with a man I had been with for some time. One night I was at a show with a couple girlfriends in Hollywood, listening to a DJ we all loved. I knew there was a chance my ex could show up, but I felt protected with my girls around me. Without going into all the of the details, I will tell you that my ex did show up, and came up to me in the crowd. He's a big guy, taller than me. The minute he saw me, he picked me up with one hand by my hair and with his other hand, he grabbed me under my skirt by my vagina— my pussy?— and lifted me up off the floor, literally, and carried me, like something he owned, like a piece of trash, out of the club. His fingers were practically inside of me, his other hand wrapped tightly around my hair. I screamed and kicked and cried. He carried me this way, suspended by his hands, all the way across the room, pushing past people until he got to the front door. My friends ran after him, trying to stop him. We got to the front door and I thank God his brothers were also there and intervened. In the scuffle he grabbed at my clothes, trying to hold onto me, screaming at me, and inadvertently ripped off my grandmother’s necklace, which I was wearing. The rest of this night is a blur I do not remember. How I got out to the car. How I got away from him that night. I never returned for my necklace either. That part of my body, which the current Presidential Nominee of the United States Donald Trump recently described as something he’d like to grab a woman by, was bruised from my ex-boyfriend's violence for at least the next week. I had a hard time wearing jeans. I couldn’t sleep without a pillow between my legs to create space. To this day I remember that moment. I remember the shame. I am afraid my mom will read this post. I'm even more afraid that my father could ever know this story. That it would break his heart. I couldn't take that. But you understand, don't you? I needed to tell a story. Enjoy the debates tonight.

4. Actress Amber Tamblyn has opened up about a horrific sexual assault in the wake of the leaked Trump video. And she’s not the only one — writer/comedian Kelly Oxford started somewhat of a movement on Twitter over the weekend, encouraging women to share their stories of sexual assault after Trump’s lewd comments were made public. Last night during the debate, actress Amber Tamblyn shared her own story on Instagram, detailing the time an abusive ex-boyfriend literally picked her up by the hair and carried her out of a club like a piece of property. “That part of my body, which the current Presidential Nominee of the United States Donald Trump recently described as something he’d like to grab a woman by, was bruised from my ex-boyfriend’s violence for at least the next week. I had a hard time wearing jeans. I couldn’t sleep without a pillow between my legs to create space.” Chilling. Read the whole story over at Amber’s Instagram.

@TOSUBUCK ion wanna break my phone so i put a pillow but hey i still did it pic.twitter.com/TnlMi0SFcd

5. In lighter news, ’cause we could all use it, high-fiving yourself while taking a selfie is the latest Internet trend. THIS CAN’T END WELL.

6. Quote of the day: “Success is walking from failure to failure with no loss of enthusiasm.” Let these words from Winston Churchill ring in your mind on this #MotivationMonday and all week long.

What’s your go-to mantra on #MotivationMonday? Let us know @BritandCo!