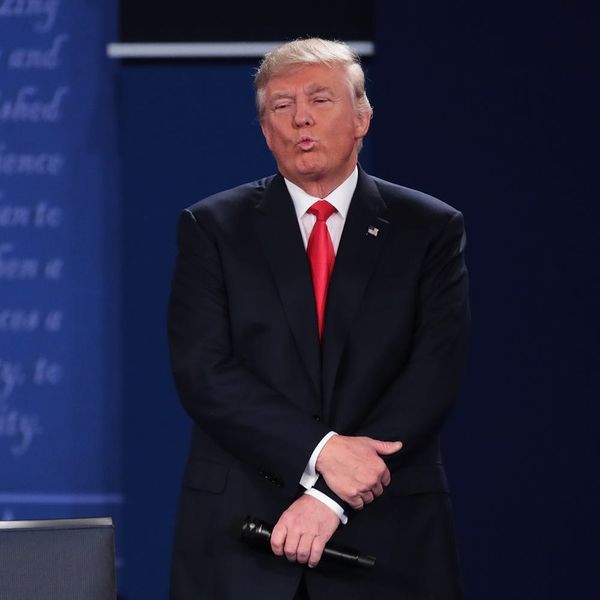 The second presidential debate is ON at Washington University in St. Louis, Missouri, and tension is thick. On the heels of fallout from a recently-released video that shows Donald Trump describing boasts about sexually assaulting women, the two candidates avoided shaking hands at the start of the debate — a rare and telling disposal of a standard ritual of pre-debate decorum. One thing is certain: These two did NOT show up tonight to make friends. Least of which, with each other.

Naturally, people are paying close attention to what’s happening in this debate beyond the respective candidates’ talking points. One thing that’s grabbing a lot of folks’ attention is Donald Trump’s body language. And, to be totally frank, many people on Twitter are creeped the F out by it. These people are observing that Trump’s posture appears incredibly threatening — and a clear indication of the Republican nominee’s real attitudes towards women.

Read on to see some of the discussion currently going down:

for someone trying not to look creepy towards woman, maybe not a number one stance pic.twitter.com/meSkFarGEL

trump hovering while hillary speaks is predatory, assertion of power, intimidation. she sits during his turn & doesn't interrupt. #debate

I am worried for Hillary Clinton. Why is TRUMP hovering over her like he wants to physically attack her. #debate

Trump hovering over her now. I’d advise her to stay out of grabbing distance. #debate

The body language of Trump staying standing & constantly lurking right behind Clinton is just a little too revealing.

And, maybe the kicker: