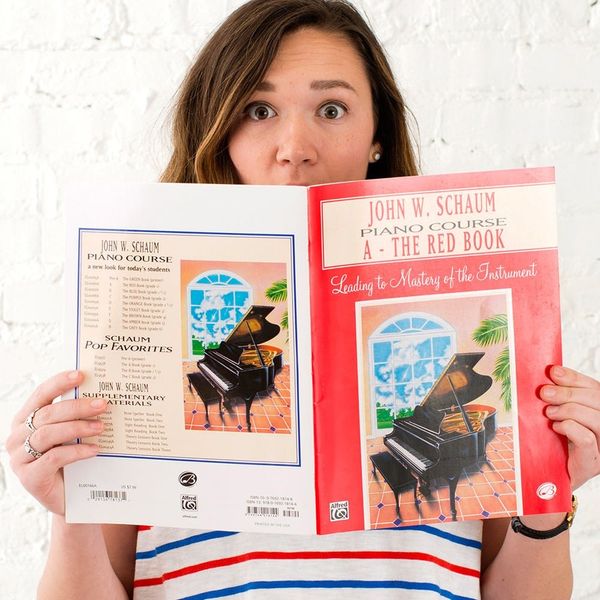 Alright, confession time: I like to sing – and not just into a hair brush, behind closed doors. I’m actually pretty good at it. I’ve performed a few times as a kid and even as a teen. But lately I’ve fantasized about getting up on stage and performing something I wrote. There’s only one problem: I can’t play an instrument. Back when New Year’s resolutions were still a thing people thought about, I added one to my list: Perform at an open mic night at some point in 2016. With it *officially* scribbled down next to my other goals for the year, I knew I had to hold myself accountable.

First things first: I needed to learn to play something. I’ve tried my hand at guitar a few times and have repeatedly discovered my hands just don’t work like that. Piano, however, comes a little more naturally to me. I used to take lessons as a kid, but stopped because I had a teacher who was basically the male version of that evil teacher in Matilda (side note: does anyone quit piano NOT because of a terribly mean teacher?). I decided piano would be my instrument of choice.

After looking into lessons and quickly realizing they are EXPENSIVE, I decided I needed to figure out how else I could learn to play. YouTube can be a great resource if you’re trying to learn one song in particular, but I was trying to really pick up on the fundamentals of sheet music and songwriting, so that route wasn’t exactly right for me. In the end I decided to test out two different budget-savvy alternatives: a smart piano (yes, you read that right) and unofficial lessons from a friend who plays (hi, Colleen!).

For my first foray back into the land of music, I gave the One Smart Piano a whirl. A little bit about the 21st-century instrument: It works just like a normal keyboard, except that you can connect it to your iPad or phone and learn through the corresponding app. There you’ll find video lessons, sheet music and practice games.

I first decided to try out the video lessons, as I thought they would be the most similar to a real lesson. What’s super cool about the One Smart Piano is the keys light up as they’re mentioned in the video, which makes it easy to follow along. This product is designed for all ages though, and that was really obvious when the overly-animated instructor sang silly songs to keep your attention. I couldn’t handle that for long and decided to move on to the sheet music portion of the app.

This was more successful for me. In this section you’ll find four categories: classical, exercises, jazz and traditional, as well as sheet music you can buy. First I decided to try a classical piece that was labeled “easy.” As someone who hadn’t really read sheet music for close to 14 years, I found it to be a bit overwhelming. What’s that weird squiggly line scattered throughout the bars again? What’s that shape that looks a little bit like a lowercase b? While the LED follow-along feature was very helpful here, I worried I was leaning too much on the light-up keys and just pressed each note because it told me to, rather than because I really understood the music.

Lessons With a Friend

After discovering my friend and neighbor Colleen knows how to play the piano, I asked if she’d be down to come by once a week to give me a lesson. She was. I ordered John W. Schaum’s and Piano Adventures’ classic books off Amazon and cracked them open the day they came. Thanks to the quick and easy-to-understand explanations in Schaum’s green book (the most basic of basic piano books), the various symbols began to come back to me (it helps that they’re made for kids). Oh yeah, that’s what a half note is. And those weirdly squiggly lines? Those are quarter rests. The stuff I couldn’t remember or didn’t know yet was introduced slowly enough that I was able to practice, learn and adapt. As the music became slightly more complicated, though, I started to have some questions. That’s where Colleen came in.

Before she came over I usually made sure to make notes about things that confused me while I was practicing. She would then answer my questions, and we’d go over the songs together. I’d also play songs that I had thought I’d mastered, and she’d point out a few things I could tweak or work on. Also, if I was seriously struggling with a tricky transition or chord, she would play it and I’d watch and copy.

My goal is to build a solid foundation of music composition that will allow me to eventually write my own stuff, so the books and lessons with Colleen were more helpful. The books really break down each concept and introduce new things gradually in a way that’s easy to understand.

That being said, the smart piano can be a super useful tool if you’re looking to dabble with the instrument or learn specific songs. In the song tutorial section, there are songs by artists like Coldplay, Rihanna and Ellie Goulding that would all be fun to memorize. The tutorials are also a smart choice if your goal isn’t to learn to read music, as they follow a format similar to Guitar Hero. All you have to do is press the right keys as the colored bars come rolling down, until you have it all memorized.

Am I ready to hop on stage after a few months of learning? Helllll no. But I’m sure closer to achieving my goal than I was before I started all of this a few months ago. One thing that’s just as true today as it was when I was 10 is that there is a “homework” sort of vibe I can’t seem to shake when it comes to practicing. After coming home from a long day at work, it’s hard to consciously decide to sit and practice rather than turn on Netflix and zone out.

However, I will say that every time I convinced myself to practice I was grateful for doing so and enjoyed it once I started. It’s not dissimilar to going to the gym in that regard. I also found it sort of meditative and even kind of exhilarating whenever I was able to finally play a song without making a single mistake. It may have just been a standard Tuesday night to someone else, but I just accomplished something I’d never done before. It’s going to take me a while, but I’ll be sticking with this resolution. And when I finally perform at that open mic and miraculously get picked up by some talent scout who just *happened* to be there, I’ll be sure to count all you loyal readers as my OG fans.

Cortney Clift
Cortney is the senior writer and special projects editor at Brit + Co. She typically covers topics related to women's issues, politics, and lifestyle. When she's not buried behind her computer you'll find her exploring New York City or planning her next big adventure.
Music
Home News
Music