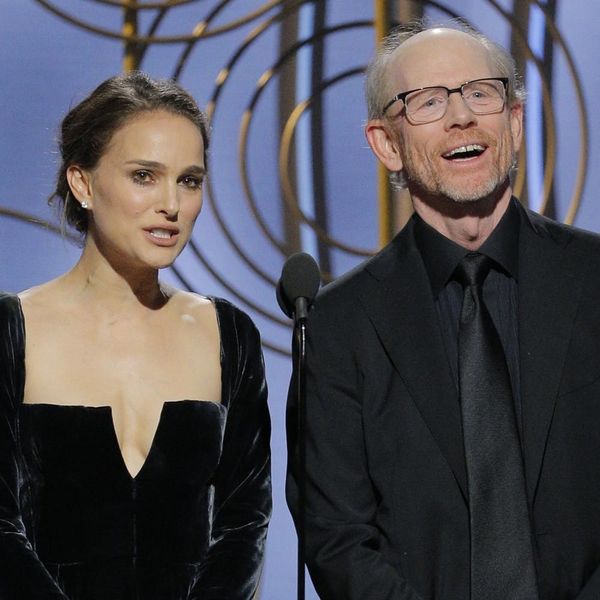 While the politics on the red carpet and the empowering speeches will live on as defining moments of the 2018 Golden Globes, a seemingly unscripted two simple words made a major impact of their own, and Natalie Portman is being praised for daring to say them.

Just seconds after Oprah Winfrey’s monumental speech about the #MeToo and #TimesUp movements, Portman and Ron Howard came on stage to present the Golden Globe for best director. Nominated for the award were Martin McDonagh, Steven Spielberg, Ridley Scott, Christopher Nolan, and the winner, Guillermo del Toro, and Portman couldn’t help but notice a sad irony about the list.

After Howard introduced the category, Portman quickly jumped in to pointedly say, “And here are the all-male nominees.”

Ron Howard: "We are honored … to be here to present the award for best director."

Natalie Portman, done with this shit: "And here are the all-male nominees." 🔥 pic.twitter.com/8JboypiADo

The reaction in the room seemed to be stunned laughter. On Twitter, viewers and celebrities alike were ecstatic about the improvised dig.

"And here are the all male nominees." Natalie Portman calls it for what it is.

Natalie Portman’s sick burn of the all male best director nominees is my favorite moment of a Golden Globes full of great moments.

And then my girl #NataliePortman names the all “male” nominees for best director! Preach!

New Yorker TV critic Emily Nussbaum praised Portman’s move as “gutsy and rude,” saying that while the night was rife with meaningful moments, the spontaneity of the “all-male” quip was on another level. “[It’s] different from a red carpet statement or even one of the great speeches,” she tweeted. “A challenge to the etiquette of the whole occasion.”

Many have pointed out that women, including Greta Gerwig (Lady Bird), Patty Jenkins (Wonder Woman), and Dee Rees (Mudbound), directed some of the year’s most successful and highly acclaimed movies, but were nonetheless left out of the running for the statue.

What did you think of Natalie Portman’s “all-male” line? Let us know @BritandCo!