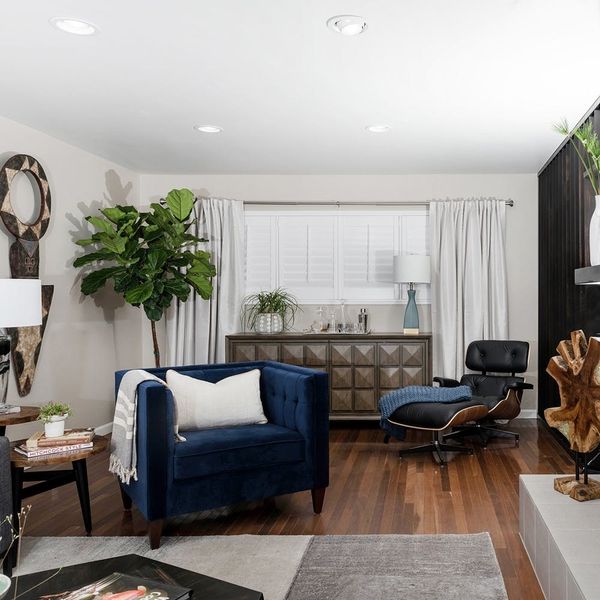 Neil Patrick Harris: Is there anything he *can’t* do? The singing/dancing/acting/producing quadruple threat showed off his lesser-known design skills recently when he joined forces with Houzz to make over his older brother Brian’s Albuquerque home. The swoon-worthy result proves that Harris is a true magician. (Both design-wise and literally!)

As part of a video series called My Houzz that shows celebrities gifting their family members with surprise home makeovers, Harris chose two spaces to focus on: an unfinished den and the backyard. Harris wanted to give his brother an oasis where he could soak up the ABQ sun in style. “Brian has always been a fantastic older brother. He doesn’t always want me to spoil him, but I thought this renovation would help create an amazing space for his next big chapter,” he said of the project.

Harris partnered with Santa Fe’s Serquis + Associates Landscape Architecture to take the space from blah to breathtaking with an outdoor dining area, a lounge, and space to cook when entertaining guests.

When it came to the den, it was acting more as a de facto dumping ground for awkward items than anything else. Harris found Lisa Samuel of Samuel Design Group on Houzz, and the two worked together to create a stylish new look for the room.

Tons of texture was layered in, bringing warmth and character to the den and making it into a real destination instead of a storage space. The vibe is masculine yet luxe, with a distinctly grown-up feel we can’t get enough of. And we’re not the only ones. “I couldn’t be happier about how it turned out,” says Harris. Watch the full reveal below:

(Photos and video via Houzz)

Emily Bihl
Emily Bihl is a freelance writer and sometimes-songwriter currently undoing a lifetime of healthy eating in the great city of New Orleans. When she’s not writing, she can be found covered in clay at the ceramics studio or attempting an approximated downward dog. She likes her black labrador Selkie, unexpected anagrams, and cracking the sugar on creme brûlée with the back of a spoon.
Celebrity
Home Decor Inspo
Celebrity Celebrity Home decor Goods Home Collaboration Home Decor Home Makeover Interior Design
More From Home Decor Inspo