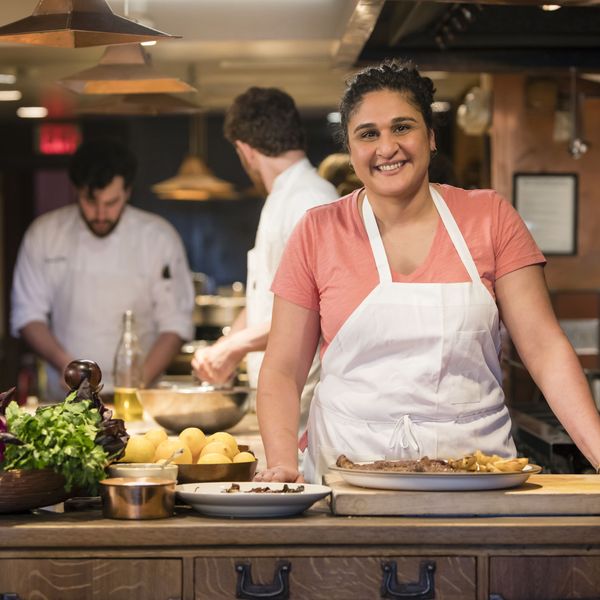 Netflix is responsible for some of our favorite binge-worthy series, including several that focus on one of our all-time favorite topics: food. With shows hosted by world-traveling master chefs and baking competitions that challenge cooks to create dishes that are at times well out of their league, there's something for every kind of culinary TV lover. If you like watching shows about food almost as much as you like eating it, check out these 11 mouth-watering Netflix originals. (Photos via Netflix)

Chef's Table: Each episode in this Netflix documentary-style series focuses on a different world-renowned chef who is helping to redefine gourmet food. As the culinary masters share stories about their background and inspiration, they put their skills on display in some seriously drool-worthy dishes. (If you have a sweet tooth, check out the dessert-themed season, which features four incredible pastry chefs and their sugary delights.) (Photo via Michael Chevas/Netflix)

Salt Fat Acid Heat: Join chef Samin Nosrat as she travels the world to explore the "four basic keys to wonderful cooking" — salt, fat, acid, and heat. Through the show, which is named after her award-winning book of the same title, Nosrat offers tips on how to create your own culinary delights while opening your eyes to some of the culinary wonders of the world. It's part travel show, part cooking demonstration, and entirely original. (Photo via Adam Rose/Netflix)

Cooked: This Netflix original breaks down cooking to its simplest, most fundamental steps by spending each episode on a different natural element — fire, water, air, and earth — and exploring how that element is used to prepare food. The series is based on Michael Pollan's book Cooked: A Natural History of Transformation, which examines both modern and ancient cooking methods. (Photo via Karen Ballard/Netflix)

The Curious Creations of Christine McConnell: If your sweet tooth is matched in intensity only by your dark side, add The Curious Creations of Christine McConnell to your Netflix queue. McConnell, an Instagram-famous baker and artist, concocts mouthwatering desserts that are as weird as they are delicious. (Some of her creations may not be suitable for children.) (Photo via Netflix)

The Final Table: Netflix's newest cooking competition might be its most intense yet. In this series, 12 international teams of chefs race through challenges to create dishes from various countries. If they can impress the panel of judges — which includes world-renowned food critics, chefs, and celebrity ambassadors such as Dax Shepard and Alessandro Ambrosio — they'll win a spot among some of the best culinary masters in the world. (Photo via Adam Rose/Netflix)

The Great British Baking Show: This popular British cooking competition originated on the BBC and currently airs on Channel 4 in the UK, but in the US, it's billed as a Netflix original. There have been multiple iterations with different presenters and judges, but in the current format, hosted by Noel Fielding and Sandi Toksvig, amateur bakers face off in a series of challenges over the course of 10 weeks in the hopes of impressing judges Prue Leith and Paul Hollywood. Netflix released "Collection 6" of the show on Friday, November 9, and fans can look forward to an upcoming two-episode holiday special, as well.

If you just can't get enough of the competition, check out The Great British Baking Show: The Beginnings, a 2012 throwback season featuring original presenters Mel Giedroyc and Sue Perkins as well as beloved former judge Mary Berry. (Photo via Netflix)

Nailed It!: Hosted by the fabulous (and hilarious) Nicole Byer, Nailed It! might be the most relatable cooking show around — at least for anyone who's experienced a major fail in the kitchen. The competition challenges three novice chefs with admittedly poor track records to recreate Pinterest-worthy desserts, often with incredibly messy results. The winner takes home $10K and earns the right to say they "nailed it!"

The show is so popular, it received a second season less than four months after the release of the first. Not only that, but seven holiday episodes of Nailed It! will hit the streaming service in December 2018. (Photo via Adam Rose/Netflix)

Ugly Delicious: In Ugly Delicious, chef David Chang guides viewers through locations including Houston, Tokyo, and Copenhagen while checking out each city's most popular foods and eateries. Joined by famous guests such as Jimmy Kimmel, comic Nick Kroll, and writer Peter Meehan, Chang sets out to learn about the cultural and culinary evolution of specific dishes — especially those that taste better than they look. (Photo via Netflix)

Somebody Feed Phil: The creator of Everybody Loves Raymond originally took his adoration for food to PBS for the short-lived series I'll Have What Phil's Having. Netflix picked up the show and reworked it, and now we have two seasons of Somebody Feed Phil, which sees the host traveling to and exploring the cuisines of cities including Tel Aviv, Mexico City, New Orleans, and Bangkok. (Photo via Netflix)

Zumbo's Just Desserts: Adriano Zumbo first came to the public's attention when he appeared on MasterChef Australia, where his croquembouche and raspberry-beetroot and black olive macaron "tower of terror" were among the challenges. In 2016, he got his very own show, Zumbo’s Just Desserts, which gives competitors three hours to create incredibly detailed stylized dishes. The series, which is co-hosted by British chef Rachel Khoo, was reportedly picked up by Netflix for a second season, but there's been no official word on if or when we should expect it. (Photo via Netflix)

Sugar Rush: Adriano Zumbo also adds his culinary expertise to Sugar Rush, where he appears alongside fellow judge Candace Nelson and a roster of guests who critique four teams of bakers competing in timed challenges. Whichever team creates the most delicious (and delicious-looking) cupcakes, confections, and cakes over the course of three rounds takes home $10,000. (Photo via Netflix)

Desiree O
Desirée O is a ‘Professional Bohemian’ who loves anything and everything related to the arts, entertainment, and pop culture. She ADORES being a ‘Newsy’ for Brit + Co, covering all of the latest tidbits of awesomeness that you want to read about. When she’s not writing, she’s either making messy art, going on long adventurous walks with her camera, or poking around over at bohemianizm (http://www.bohemianizm.com/). You can find out about Desirée O and her work at http://DesireeO.com/ or follow her on Twitter @DesireeO.
Foodie
Streaming
Foodie Netflix TV
More From Streaming