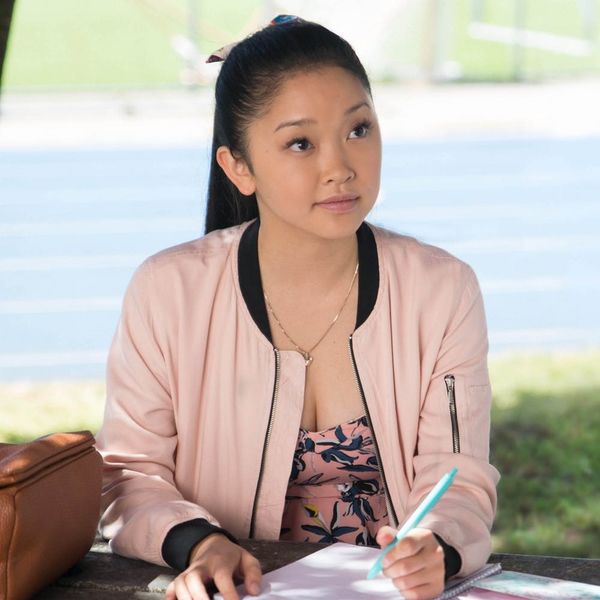 Netflix’s rom-com streak continues! The streaming service just debuted the first teaser trailer for its upcoming YA flick To All the Boys I’ve Loved Before, and while the plot of the film is basically our teenage nightmare come true, the movie itself looks pretty adorable.

Lara Jean Song (Lana Condor) has had five major crushes in her life: “Peter with the beautiful eyes, Kenny from camp, Lucas from homecoming, John Ambrose from Model UN, and Josh, the boy next door.”

When her secret feelings for them become “so strong that [she doesn’t] know what else to do,” she indulges her romantic fantasies by writing uncensored letters to the objects of her affection — letters she never intends to send. But when the notes somehow make their way to their (un)intended recipients, Lara Jean’s world is rocked in ways she couldn’t imagine.

“I think that all teens have fantasized about a seemingly unattainable crush at one point in their life,” Condor told Teen Vogue of the movie, which is adapted from Jenny Han’s 2014 novel. “I believe we’ve all been through the doubts and self-consciousness that comes with whether or not we should approach our crush and get to know them. It’s the fear of rejection. I think Lara Jean has all of these universal fears and eventually learns that people will love who she really is if she just is her authentic self.”

The actress, who played Jubilee in 2016’s X-Men: Apocalypse, also spoke about what it means to her to be the lead in a Netflix film, saying, “There aren’t that many rom-coms out there starring an Asian lead love interest. So, I was and am over the moon to hopefully begin to pave the way for other ladies (and men) in my position. It means the world to me.”

To All the Boys I’ve Loved Before hits Netflix on August 17. Check out our Summer Entertainment Bucket List for more recommendations.

Do you have a story about your high school crush? Let us know @BritandCo!

Desiree O
Desirée O is a ‘Professional Bohemian’ who loves anything and everything related to the arts, entertainment, and pop culture. She ADORES being a ‘Newsy’ for Brit + Co, covering all of the latest tidbits of awesomeness that you want to read about. When she’s not writing, she’s either making messy art, going on long adventurous walks with her camera, or poking around over at bohemianizm (http://www.bohemianizm.com/). You can find out about Desirée O and her work at http://DesireeO.com/ or follow her on Twitter @DesireeO.
Movies
Movies
Movies Netflix Streaming
More From Movies