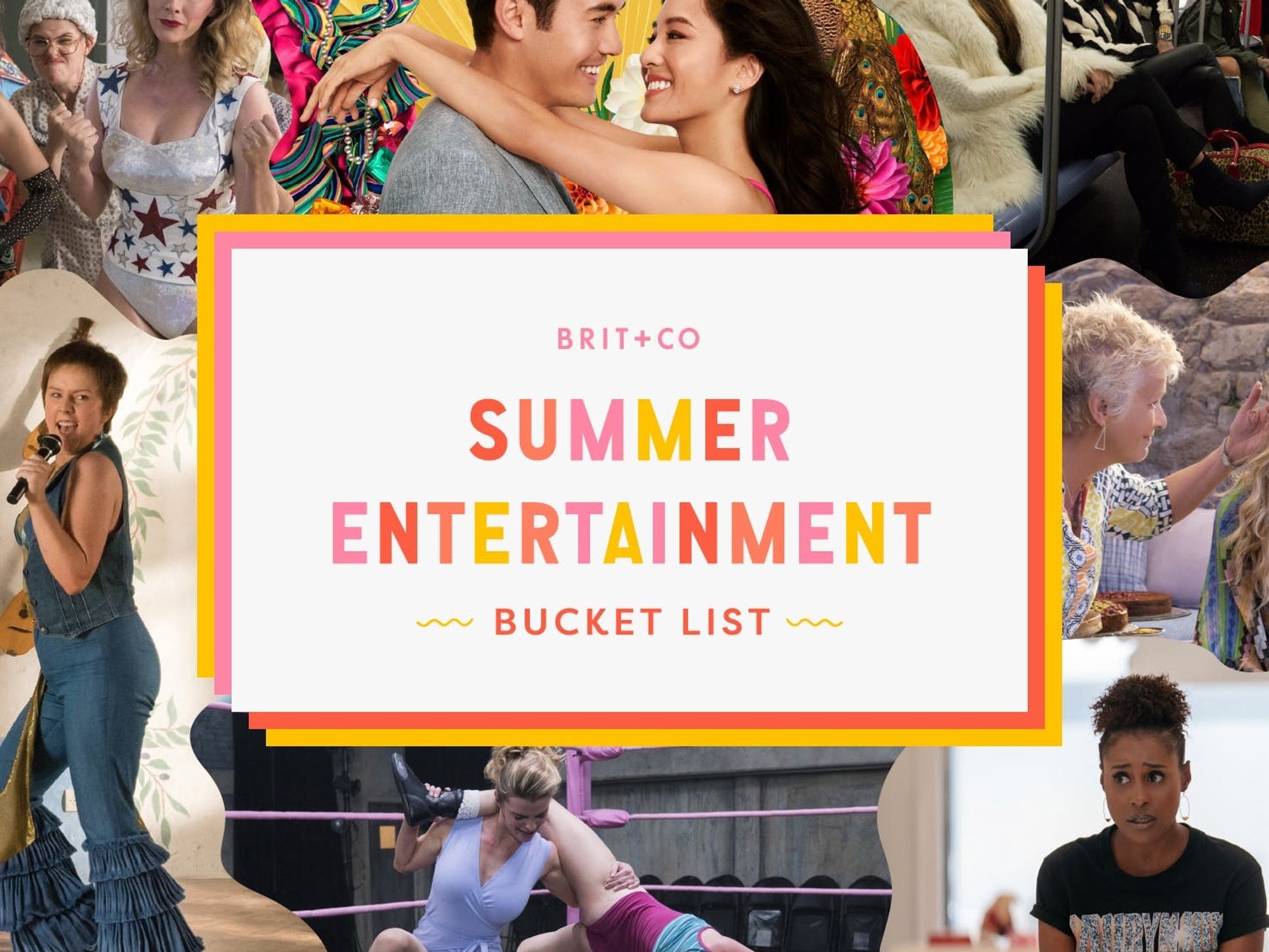 Backyard BBQs and sunny afternoons at the beach are fab ways to enjoy the warmer days of summer, but sometimes you just want to relax in an air-conditioned room and forget about the outside world for a few hours. Enter: Brit + Co's Summer Entertainment Bucket List.

We're here to help you beat the heat and navigate the crowded landscape of summer movies, music, and TV. Below, you'll find everything you need to know about the biggest blockbusters, buzziest new shows, and most Insta-worthy festivals, with spotlight picks that feature female artists, performers, and creators. The guide is organized by month and category, so you can scroll through at your leisure or zero in on what most interests you.

We've been looking forward to this Gary Ross-directed film for what feels like years, and honestly, a life of crime has never looked like so much fun.

Other Must-See Movies in June

With its unabashed '80s camp, glittery costumes, and killer cast, Netflix's fictional take on the Gorgeous Ladies of Wrestling was a hit as soon as it premiered in June 2017 — and we've been counting down the days until season 2 ever since. When we last saw the GLOW squad, they had just finished shooting their pilot, and their stars were on the rise. In season 2, we'll get to see Ruth "Zoya the Destroya" Wilder (Alison Brie), Debbie "Liberty Belle" Eagan (Betty Gilpin), Carmen "Machu Picchu" Wade (Britney Young), and the rest of the wrestlers become a cultural phenomenon.

Look out for some new faces, too: Faking It's Shakira Barrera, The Sopranos' Annabella Sciorra, and Dear White People's Wyatt Nash are all joining the cast this season.

Other Must-See TV and Streaming Highlights in June

6 Reasons We're Excited to See Becca Kufrin as the Bachelorette

Christina Aguilera hopes to reclaim the pop throne with Liberation, her first album in six years. With an all-star production team — including the oft-controversial Kanye West, Che Pope, and Mike Dean — plus collaborations with superstars Demi Lovato, Ty Dolla $ign, and 2 Chainz, her return looks like a sure bet.

Notable singles so far include: "Accelerate," a stripped-down but synth-heavy track with strong hip-hop influences; "Fall in Line," an empowering anthem with knockout vocals from both Aguilera and Lovato; and "Twice," a contemplative, piano-driven ballad.

Other New Music and Festivals in June

Ten years and two days after the release of Mamma Mia!, the long-awaited sequel will dance its way into theaters to the tune of your favorite ABBA hits. When we catch up with Sophie (Amanda Seyfried) this time, she's pregnant and running her mother's Kalokairi island villa, where Donna spent her own pregnancy (which we'll see in flashbacks with Lily James) 30 years earlier.

Early looks at the Ol Parker-directed film left us with questions about the whereabouts of Meryl Streep's character in the present timeline, but the rest of the cast — including Pierce Brosnan, Stellan Skarsgård, Colin Firth, Christine Baranski, and Julie Walters — is present and accounted for. Bonus: Cher stars as Sophie's fabulous grandmother, Ruby.

Other Must-See Movies in July

Welcome to your summer TV obsession. In this adaptation of Gone Girl author Gillian Flynn's 2006 debut novel, Amy Adams plays a young reporter who, upon her release from a psychiatric hospital, heads back to her hometown to investigate two gruesome murders — and confront the demons in her past while she's at it.

Other Must-See TV and Streaming Highlights in July

Kicks Off July 8 in New Orleans

Weeks after wowing the world with her first TV performance in nine years at the 2018 Billboard Music Awards, Janet Jackson will take to the road for 15 shows across the US in July and August. The State of the World tour is a rescheduling of the 2015 and 2016 dates that were postponed when Jackson gave birth to her first child, and it could very well be the beginning of a comeback for the pop legend.

Other New Music and Festivals in July

Five years after becoming the must-read book of the summer, Crazy Rich Asians is back, but this time it's headed for the big screen. The Jon Chu-directed film adaptation of Kevin Kwan's best-selling novel follows Nick Young (Henry Golding, in his first movie ever) as he and his girlfriend, Rachel (Fresh Off the Boat's Constance Wu), travel to Singapore for his best friend's wedding. A Julia Roberts-romantic comedy this is not. If you don't get hooked by the juicy plot lines — family rivalry! power struggles! excessive spending! — you will by the jaw-dropping fashion.

Other Must-See Movies in August

13 Books to Read Before They Become Movies in 2018

Issa Rae has one of the most original voices on TV, and Insecure is at once both universal and totally specific. "I want people to talk about Insecure, I think that's the best part," Rae told us last year. "The feedback after each episode and people talking amongst themselves about some of the themes in their own personal relationships and friendships and their workplace — those conversations are just really, really fulfilling for me."

Season 3 is sure to spark even more conversations as Rae's character, Issa Dee, attempts to move on for good after getting closure with Lawrence in season 2, and Molly (Yvonne Orji) continues her relationship with Dro while trying to take her career to the next level.

Other Must-See TV and Streaming Highlights in August

Following the deadly bombing at her Manchester concert in May 2017, Ariana Grande took some time away from the spotlight, but in August she'll return with Sweetener, her fourth studio album. The triumphant first single, "No Tears Left to Cry," has already soundtracked the first half of our summer, and we have no doubt that the rest of the album will be just as impactful.

Other New Music and Festivals in August