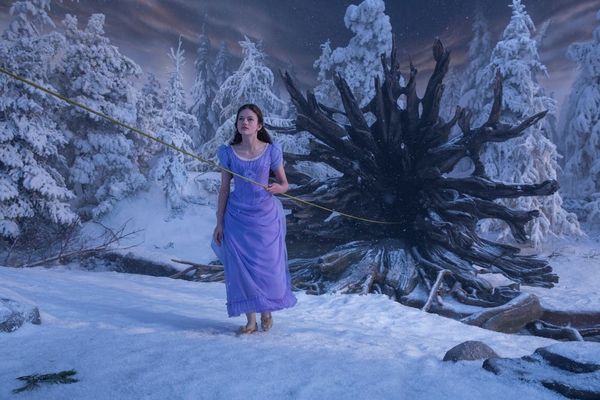 Even before Disney’s TheNutcracker and the Four Realms hit theaters in November, the internet was abuzz over the gorgeous sets and fanciful costumes previewed in the trailer. Now, thanks to this exclusive behind-the-scenes clip from the bonus features on the Blu-ray, available Tuesday, January 29, we’re getting an inside look at costume designer Jenny Beavan’s process and inspiration.

Beavan, whom production designer Guy Hendrix Dyas describes as “an absolute genius” and “one of the greatest costume designers alive today,” created literally hundreds of looks for the film, including duplicates for the main characters and outfits for every person in every scene in the titular four realms.

“A project like this is just amazing for a costume designer,” she raves in the featurette. “The variety will provide some fantastic characters to costume.”

The heroine, of course, is Clara, played by Mackenzie Foy. Clara’s primary look in the film is a delicate purple party dress with puffed sleeves, floral embellishments, and a bustle, which she’s wearing when she’s transported from the Christmas Eve ball to the magical land of the four realms.

“The dress she wears to the party was a tricky one,” Beavan told Brit + Co in a recent interview. “She’s obviously not a particularly dressy girl. But I felt for the party, they were a family with wealth, so she [would have] had a proper dress. But the main thing I wanted was that when she came out into the snow [in the realms], it was extremely inappropriate to be dressed in such a gauzy, flimsy dress. Because I loved those images and the sort of idiosyncrasy of that.”

Beavan also told us that the color of Clara’s party dress was significant and “slightly unusual,” in part to differentiate it from other iconic gowns in the Disney canon. “I think Disney wanted a [new] color,” she said. “You know, they’d done the yellow dress for Belle and the blue dress for Cinderella. And I thought, well, that’s a lovely idea.”

Later in the film, as Clara ventures further into the realms, she changes outfits, wearing both a soldier uniform and a pageant dress that Beavan describes in the above clip as “princess-like.”

“The pageant dress — that is a really cool dress, with the lace and the sleeves,” Foy gushes. “It flows, it has this long train, it’s got this flowery pattern. It was one of those dresses, when you’re a little girl, you wish could wear a really crazy fancy dress — that’s that dress.”