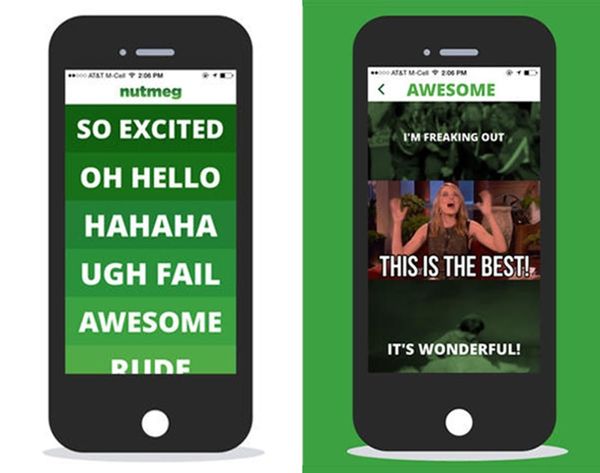 From smoke signals to Snapchats, from hieroglyphics to GIFs, we’ve come a long way when it comes to saying “hey.” And this week we’re going even a little farther with more options to upgrade your “what’s up?!” arsenal. From Facebook’s (second) shot at the fleeting friend message, to a new way to GIF it up PLUS another emoji update, take a look at all new ways to say… ;)

1. Slingshot on Facebook: We wrote about this last week when Facebook accidentally released it… but now it’s available to download. (In more than just the Malaysian App Store!) The app is at least a little more than just a Snapchat copycat. It lets you share moments in the moment with all of your Facebook friends who have it downloaded. To see the photo or video you send out, your friends have to unlock it by “sling”ing one back to you. Tradesies!

2. Snapchat Launches Collaborative Storytelling: Summer’s here, which means picnics with pals and music festivals with the masses. Snapchat elevates from private messaging app to legit social network in their latest update that lets you join forces with friends and fellow event attendees to turn My Story into Our Story. Follow and join collaborative Snapchat Stories — or watch them from your phone if you can’t be there IRL, starting with this weekend’s Electric Daisy Carnival.

3. Nutmeg Is the Best GIF Texter Yet: Who needs email?! Nutmeg makes sending GIFs to your friends easy as 1) choose a hilarious GIF from the app’s library, 2) double tap it so it shows up in iMessage 3) send!

4. Facebook Messenger Update: In the app’s latest iOS update, you can bring your Facebook Messaging to new places — like, ones where stickers and 15 second videos exist.

With the reminder that you can do it all, literally all (group texts and phone calls even) for free within the app, it’s almost like FB is saying, “What’s WhatsApp?”

5. New Emojis! We told you about this yesterday, but the encyclopedia o’ emojis was down… so here we are back with the update you were waiting for: A LIST OF ALL 250 NEW EMOJIS!!! And a release date — expect them to be textable after they’re released in the Emojipedia in July.

What app do YOU use to take texts and iMessage to the next level? Are your friends Snapchatterboxes, GIF BFFs or do you speak exclusively in emoji?

Lisa Raphael
In her past professional lives, Lisa has served the masses as the Editorial Director at Brit + Co, Bieber Whisperer at J-14, Golden Girls Fan Club Prez at Lifetime and Talk Show Host Understudy to Katie Couric. Now, she's taking on the sports world at The Relish, teaching Hairography 101 in her spare time and will forever be trying to fill the hole Zayn Malik left in her heart.
Facebook
Tech
Facebook Snapchat social media