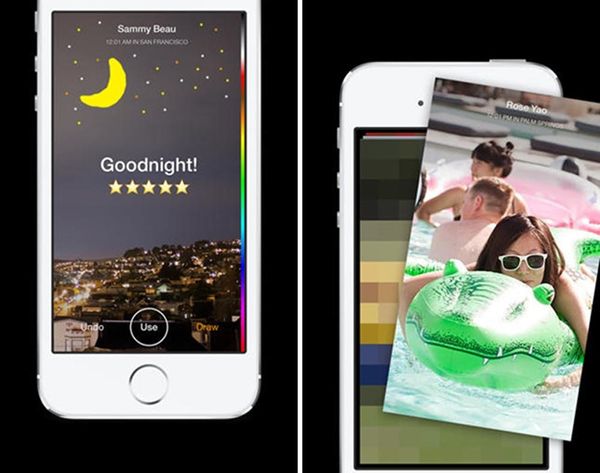 First Facebook tried to beat Snapchat at its game with a self-destructing photo and video message app called Poke, then it tried to buy Snapchat for 3 BILLION DOLLARS, then just last month it killed Poke and now… we know why. Today Facebook released another competitor angling for a downloadable piece of the quicky photo social network pie, Slingshot. Oh, and then it pulled it from the app store. Facebook, CHILL!

Earlier today The Verge reported that Facebook had quietly released their rumored new app called Slingshot. The app — similar to Snapchat, recently-popular competitor TapTalk and smaller guys like Selfie360 and #Pop — would allow users to message friends using photos. Like Snapchat, you could doodle on them or include text before sending, they would disappear after being opened — you know the drill.

The biggest difference between this app and any of the others like it was that you had to “sling” back your own photo before getting access to your friends’. That could be cool OR it could signify a never-ending Snapchat-for-all that sounds a little unsatisfying. Don’t I want to utilize the “React” function after I see my friends’ funny photo? At least in Snapchat-Land, you have the power of choice: You can be a passive receiver of artistic bursts from friends (and even more and more brands as of late), or you can be the obsessive documenter filling up followers’ feeds with mini glimpses of your life.

Only available to download in select countries’ iTunes stores, Slingshot soon went from limited to no release in a matter of minutes as it was yanked from every last remaining (even the Malaysian App Store where I was able to track it down this afternoon!) location. A Facebook spokesperson confirmed to Mashable that they accidentally released “a version” of Slingshot, which they are still working on. Oops.

Accident or publicity stunt to pique our interests? It seems like Slingshot could be successful if it replaces or enhances Facebook messaging. It also might be a hit if its core function is available WITHIN the existing app/social network, like how Tinder Moments is just a new feature inside Tinder’s latest app update. Especially after failing to make the second coming of Poke a thing, Facebook is going to have to work extra hard to get us to download yet another app meant to do something we are already happily doing somewhere else.

Where do you stand on the great messaging app debate?! Would you give Slingshot a try or are you a true-blue Snapchatter? Have you tried TapTalk? Share below!

Lisa Raphael
In her past professional lives, Lisa has served the masses as the Editorial Director at Brit + Co, Bieber Whisperer at J-14, Golden Girls Fan Club Prez at Lifetime and Talk Show Host Understudy to Katie Couric. Now, she's taking on the sports world at The Relish, teaching Hairography 101 in her spare time and will forever be trying to fill the hole Zayn Malik left in her heart.
Snapchat
Tech
Snapchat social media