Watch: How OK Go Made the Crazy Creative “The Writing’s on the Wall” 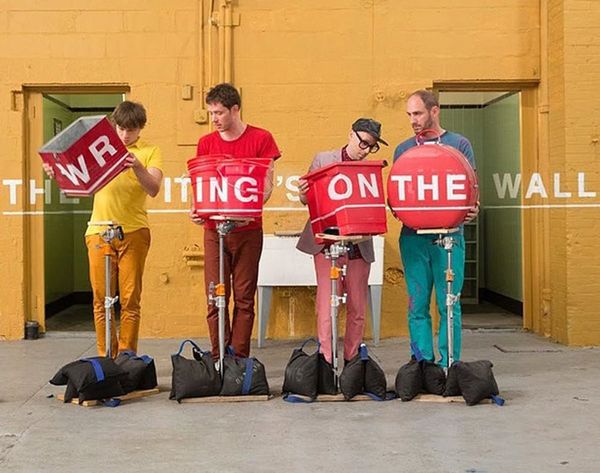 You might have more in common with the band OK Go than you think. Besides sharing a love for infectious pop tunes and beyond creative music videos, the quartet is comprised of self-described makers. “OK Go likes to make stuff,” announced frontman Damian Kulash in a promo clip for the White House Maker Faire — you know, the mega-maker event that we attended where Brit got to geek out with Bill Nye the Science Guy? And so, we can add one more <3 to our list of why the LA-based band rules (another if we can profile them MTM-style! Damian, hit me up). That’s because the band combines all three of its/our passions in the latest video for the song “The Writing’s On the Wall.”

Since the video (which you can watch below) was released a week ago, it’s been viewed more than seven million times, and once you click “play,” you totally get why. Like its other majorly conceptual viral vids that feature a massive DIY Rube Goldberg machine or the band busting moves on treadmills, this one too, is epic: a one-take, illusion-packed mind-boggling masterpiece.

Everything you see in the four minute video is a trick of the eye, from the playground of shifting sets to the band members’ printed clothes that blend in with graphic backdrops to the meticulously painted murals that align + disjoin according to the camera’s perspective. Yeah, it’s intense and amazing to watch, but as you can imagine, even more intense and amazing to pull off.

In a making-of video the band released shortly after it left the masses scratching their heads, OK Go give us a behind-the-scenes look at the choreographed chaos that went into making the magical music video. As you can imagine, there was a ton of movement involved: Climbing up ladders, sliding down poles, dodging the lens of the hot-potato handheld camera — oh, and if you’re in the band, all the while singing in time with the track.

The sneak peak is almost more inspiring than the official video. You get to feel the urgency, see the sweat and watch care that the 50+ person crew put into making this extraordinary piece. The rush of three weeks of construction, nine costume changes and 28 perfectly executed illusions is well worthy of the whooping after the director yells “Cut!”

Cool, huh? What did you think of OK Go’s latest video? Tell us in the comments below.