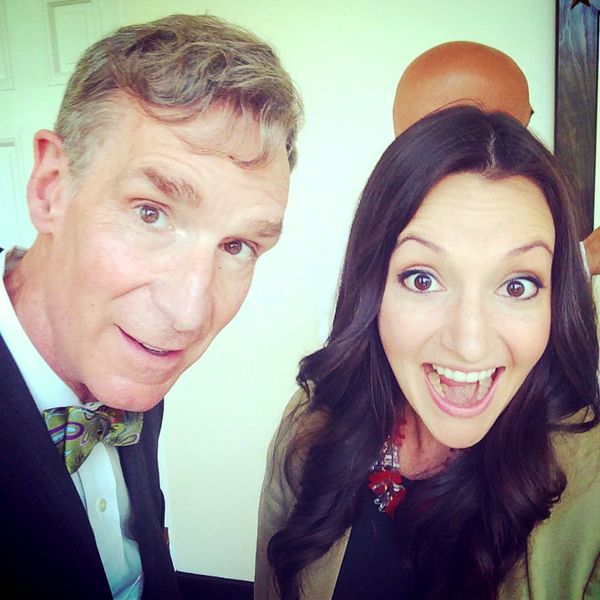 Let me start by saying this:

Bill Nye pulled more photo requests than Will.i.am, the first-ever 3D scan of a President was unveiled, and there was a seventeen-foot-tall robotic giraffe roaming the White House grounds… I’m pretty sure these things have never happened before at one event!

That’s right, yesterday, was the White House Maker Faire and I was lucky enough to get a front row seat for all the action. As background, I was invited to be part of the small group of 100 makers, innovators and entrepreneurs from around the country, and chosen specifically to represent all of you creatively awesome gals and guys who love Brit + Co.

app-created “Makers Gonna Make” tee, 3D printed watch, DIY laser cut necklace (for sale as a Brit Kit!), and my very favorite kicks, Kate Spade glitter sneakers. The White House gave me instructions to dress in “business” attire, but that’s what I typically wear to my business, so I figured it worked, right? I also told anyone who asked that I was dressed in “Maker Chic.” Pretty sure we should all aim to keep that fashion trend around moving forward ;)

While it’s hard to pick my favorite moment, here were a few of the highlights:

I was thrilled to see so many women and kid makers at yesterday’s event! From the mother-daughter team presenting Squishy Circuits, which uses Play-Doh to create circuits, to Beatty Robotics created by teenage sisters Camille and Genevieve Beatty, it was wonderful to see women participating in the maker movement in such large numbers! And let’s not forget about kids. From his marshmallow shooter to his LED shield (powered by the Intel Galileo), young makers like Joey Hudy were definitely bringing their A-game.

I will never forget President Obama addressing the attendees. In his speech, he got us all laughing when he asked why there was an ‘e’ at the end of ‘Maker Faire’ and then got serious about how makers can impact the future of American manufacturing: “Today’s DIY is tomorrow’s ‘Made In America” — um, best quote EVER? Can I get that laser etched onto a poster, please? [runs to go make poster]

I Got the Flu

No really, I did. This is me holding a 3D-printed DNA strand of the flu virus. Crazy huh!? Structural biologist Darrel Hurt created these 3D printed models to help people understand molecular structures. Being able to see and hold 3D printed DNA was such a fun way to approach this topic. And how cool is that 3D printed frog? I can already see these in classrooms across the country!

If you grew up in the 80s or 90s, I don’t have to tell you how cool Bill Nye is/was. I was able to chat with him for a bit (FYI: he legit LOVES science/making — he couldn’t stop talking about all the cool exhibits there) and even managed to snag a selfie with him. He took it, pointing out that he knows the iPhone trick of using the side volume button to snap a pic! My childhood dreams are complete.

Our Brit + Co partners, Other Machine Co. and littleBits were both in attendance showcasing their cool gadgets and gizmos. Not familiar? We’ve been fans of both for a while now, and you can even purchase their products in our shop!

A crowd favorite at this year’s Bay Area Maker Faire, the PancakeBot, a 3D printer for pancakes, was on hand… this time, creating pancakes shaped like the President! After crowdsourcing a caption for these, some of best names submitted for this culinary portrait are: Bamcakes, Barackakes, Yes we Pan(cake), IHOPe and Hail to the Chef.

Who needs a 3D printed pancake when you can have a 3D printed President? That’s right, Obama is the first U.S. President to be 3D scanned (by the Smithsonian) then 3D printed in plastic. Cool or creepy?

Can walking charge your phone? That’s the idea behind SolePower’s EnSole, a shoe insert that gathers energy with each step you take and stores it in a battery pack you can use to charge your electronic devices. This one is a double-win in my book!

C’mon, I can’t go to the White House and not give props to the mad work Michelle O has been doing to the interiors. While the “Red Room” was my favorite, it was also very cool to see all of the artwork of the past first ladies adorning the walls. The place is kept in impeccable shape — I could smell the fresh paint!