Why You Should Add Olive Oil to Your Lemonade 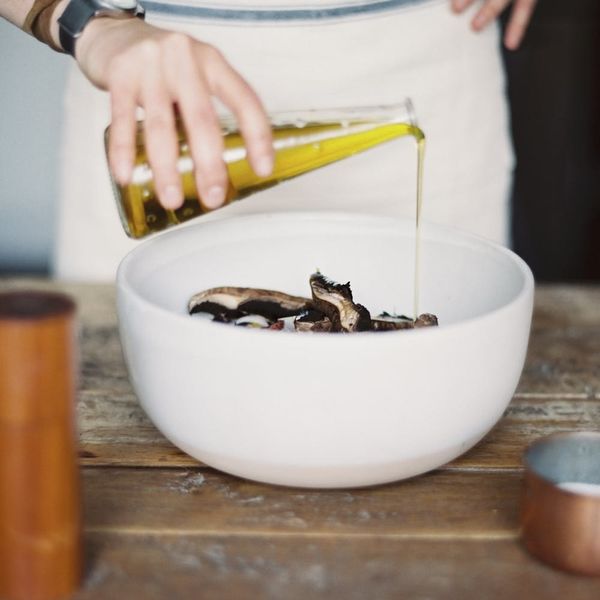 Whether you used it for dipping bread or cook with it on the reg, you’re likely familiar with olive oil. But for most Americans, it’s not a staple in our diets, and we’ve got a long way to go when it comes to learning how to best use it to our benefit.

According to 2015 stats from the International Olive Oil Council, Americans used just one liter of olive oil per year in comparison to the 12.5 liters Greeks used, or the 11.5 and 9.3 liters consumed by people Spain and Italy, respectively. “Americans were raised on canola and vegetable oil,” Larissa Iracheta, director of quality for Deoleo (the company handling production for such olive oil heavyweights as Bertolli and Carapelli), tells us. “They don’t know anything else.”

To prove just how versatile the healthy fat is, we looked to the seasoned pros, AKA Europeans, for inspiration. Here, three tips to keep in mind when incorporating olive oil into our diets.

Think outside the salad bowl or cooking pan. Iracheta says Europeans actually use olive oil more like a condiment, adding it to dishes for breakfast, lunch, dinner, and dessert. Liberal portions are poured over foods we would never think to add it to — salted ice cream or cooked steak, for instance. It’s also drizzled in soups and spread on toast, drizzled over salmon, and mixed into beverages, including cocktails, orange juice, and lemonade, to give drinks a creamier taste. For Iracheta, the most surprising use she’s seen was when she witnessed it being added to ice cubes to flavor water.

There’s also another group entirely that uses the oil for beauty purposes: In addition to the countless scrubs you may have encountered with olive oil listed as an ingredient, Iracheta places a bit into her shampoo to give her locks a healthy luster and says she’s also seen it used as a makeup remover.

OLIVE OIL HAS HEALTH BENEFITS BEYOND YOUR WILDEST DREAMS

For Joanne Lacina, president and founder of e-commerce site Olive Oil Lovers, seeing plenty of “skinny” Europeans around her consuming olive oil without restraint was an eye-opening experience. “It’s just not part of our American culture,” she explains. “[I think Americans] are still a little bit hung up on [the idea] that it will make you fat if you eat too much.”

However, olive oil, which is considered a healthy, or monosaturated fat, has been credited with everything from reducing Type 2 diabetes and preventing strokes to fighting depression, osteoporosis, and certain kinds of cancer. In 2005, the FDA even supported a claim that olive oil may reduce coronary heart disease when replacing a similar amount of saturated fat and not increasing your calorie count.

Its secret lies in its polyphenols, an anti-oxidant that protect your cells from damage. It also has anti-inflammatory properties, including oleocanthal, which works similarly to ibuprofen. And it’s plenty good for your mind: A recent study in the Journal of Molecular Biology showed oleic acid, olive oil’s main fatty acid, as an aid to the suppression of brain tumor molecules grown in a lab. Another found that extra virgin olive oil can help to protect the brain from the toxic substances which lead to Alzheimer’s disease. Whoa.

NOT ALL OLIVE OIL IS CREATED EQUAL

Of course, not all olive oil offers the same taste or benefits. Unlike refined or “light” oils, which are generally tasteless and colorless, or pure olive oil, which mixes refined olive oil and extra virgin olive oil together, extra virgin olive oil is cold-pressed, meaning it has not been touched by any chemicals or heat, leaving much of its anti-oxidents, nutrients, and original flavor intact. That flavor can vary, however, by country of origin, olive types, and even surrounding environments where a crop is grown. As Iracheta explains, if a crop is grown in Tunisia, for instance, it’s likely to take on an almond flavor, as many almond crops are grown nearby. Spain, by contrast, might have hints of tomatoes.

An olive oil’s label can also give you many clues about its quality. Though the two experts differ in their opinion of blended oils — Lacina prefers hers to come from a single-source producer while Iracheta enjoys blending different types to create “something magical,” such as the multi-regional blend used in Bertolli’s Organic Extra-Virgin Olive Oil — both women recommend seeking out an oil’s country of origin, region, and its harvest date. Unlike wine, Lacina says, “You always want to buy something from the most recent harvest,” which occurs in the fall.

How do you use olive oil? Share with us @BritandCo.

(Photos via Bertolli, and Getty)

Nicole Briese
Nicole is the weekend editor for Brit + Co who loves bringing you all the latest buzz. When she's not busy typing away into the wee hours, you can usually find her canoodling with her fur babies, rooting around in a bookstore, or rocking out at a concert of some sort (Guns N' Roses forever!). Check out all her latest musings and past work at nicolebjean.com.
Food Trends
Healthy Eating
Food Trends Foodie
The Conversation