WTF Are These White Worms in My Salmon? 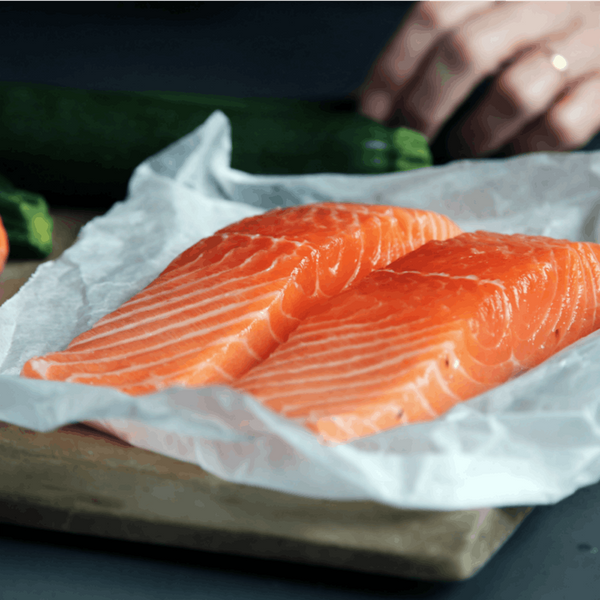 In a world where people are hopping onto strange food trends without hesitation, like cooking with charcoal and eating bugs, it’s amazing anyone could still be grossed out by foods. Needless to say, we still have our limits… especially when it comes to itty bitty white worms wiggling around in our pretty pink salmon fillets (WHUT). But before you swear off these healthy Omega-3-rich fillets for good, let’s understand what these worms are, why they’re present, and why you don’t have to snub your fave lox at brunch this Sunday.

The white worms we occasionally spot in salmon fillets are parasites called roundworms. Though these worms are more noticeable in salmon due to the contrast in color, they can be found in many white fish too — they’re just camouflaged.

But we shouldn’t be freaking out.

Despite the fact that our knee-jerk reaction is to panic and consider things contaminated, roundworms are as natural to fish as insects are to fruits and veggies. A teeny white worm in your salmon is the equivalent to an aphid, thrip, or mite in your recently harvested greens. Yes, it’s still yucky AF, but totally natural.

The good news is that roundworms don’t pose health risks when fish is thoroughly cooked to an internal temperature of 145 degrees Fahrenheit, which is the FDA’s recommendation. When it comes to lightly preserved or raw fish — like sushi, sashimi, ceviche, or gravlax — as long as the product was commercially frozen to an internal temperature of -4 degrees Fahrenheit for at least seven days prior to preparation, parasites are terminated. (High five, fellow sushi lovers!) Just be sure to avoid sketchy sushi joints; when you hear about people getting sick from eating at low-profile all-you-can-eat sushi spot, it’s because they aren’t handling their fish properly.

It is believed by some that wild-caught fish are more susceptible to roundworms due to the fact that they interact with an external ecosystem, while farmed fish are segregated from the wild and are fed pellets treated for parasites. This isn’t something *we* can confirm, but it’s food for thought nonetheless.

If you really want to feast on fish but paranoia has now gotten the best of you, there is an at-home method you can try: fish candling. This method has you place a bright light beneath a fillet of fish so you can see the shadows of any worms present. You can then grab some tweezers and remove, then discard of the worms yourself. (This method obviously isn’t for the faint of heart.)

Would finding worms in your salmon deter you from eating it ever again? Let us know @BritandCo!

Dana Sandonato
Born in Canada and now living in the beautiful state of North Carolina, Dana is a coffee-reliant food writer with a healthy appetite, a taste for culinary adventure, a thirst for good beers, and an endless hunger for food photography. When not writing for Brit + Co, she can be found pouring herself into her blog-turned-webzine, Killing Thyme, or taste-testing at local breweries with her husband. Dana's ideal down time includes pizza, marathoning on Netflix, or watching her fave flicks from the 80s and 90s - no matter how great or awful they are!
Fish
Food News
Fish
The Conversation
Reviews:
More From Food News