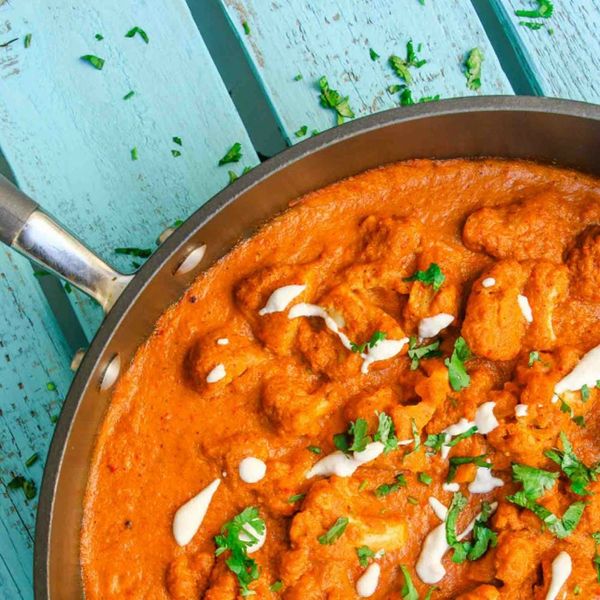 One of the first things you notice once you’ve gone Paleo is that cauliflower heads have taken over your veggie drawer. And that makes you happy, because cauliflower is the versatile vegetable that makes you forget your former comfort foods. Low in carbs and calories but packed with vitamins, minerals and fiber, it’s delicious in a silky soup, of course, but it’s also a completely tasty substitute for mashed potatoes, fried rice and pizza crust. And, pro tip: It’s a great thickener for non-dairy sauces. Here are 12 recipes that show why plain old cauliflower is a Paleo powerhouse.

1. Cauliflower Fried Rice: When you find yourself craving fried rice, grain-free cauliflower rice comes to the rescue! The secret ingredient to get that Chinese fried rice flavor is liquid coconut aminos, which has the umami flavor of soy sauce but is completely Paleo — and even Whole30-compliant! Vegan and GF friends will love this one too. (via Little Bits Of)

2. Cauliflower Tikka Masala: This one’s like everyone’s favorite paneer tikka masala, minus the heavy cream and cheese. This GF adaptation has all the curry taste you crave, but it derives its creaminess from coconut milk. Add a drizzle of cashew créme at the end to make it even creamier. (via Vegetarian Gastronomy)

3. Roasted Garlic Cauliflower Alfredo Sauce: To make this Alfredo taste-alike recipe Paleo, just substitute a sprinkle of yeast flakes for the Parmesan cheese. Nutritional yeast has a salty flavor and mouthfeel that’s similar to cheese, and most Paleo eaters — including ThePrimal Blueprint author Mark Sisson — find it compliant. Ladle this divine sauce over morning eggs for a tasty Benedict, or over fish, zoodles or cauliflower rice at dinner. It also makes a delicious white pizza sauce on a grain-free crust. (via Crunchy, Creamy, Sweet)

4. Paleo Shepherd’s Pie: This is everyone’s favorite comfort food that signals to Paleo converts early on that you can do this. Full of savory grass-fed beef and veggies, this shepherd’s pie is topped with a decadent mound of mashed cauliflower. The casserole can be made ahead and frozen. Bonus: Next-day leftovers taste twice as good. (via Foraged Dish)

5. Cauliflower Roasted Red Pepper Soup: This silky soup is simple to make, and *so* satisfying. Coarsely chop red pepper and cauliflower, then roast them in the oven until caramelized. The rest of the recipe comes together quickly in a soup pot and is ready to eat in under an hour. It’s Paleo, vegan and GF. (via Gal on a Mission)

6. Low-Carb Cauliflower Hummus: If it was once a fave go-to food, you’ll at some point find yourself yearning for hummus. This taste-alike is just the thing to crush that craving. Creamy and sesame-nutty, it’s Paleo-friendly, vegan and GF. Scoop it up with red bell pepper chips; one creamy bite, and you’ll swear it’s the real thing. (via I Breathe I’m Hungry)

7. Chicken and Cauliflower Yellow Curry: This spicy and delicious curry bubbles up rich and creamy thanks to coconut milk. Substitute arrowroot flour for the corn starch and serve it over riced cauliflower for a perfectly Paleo meal that’s also GF. (via I Food Real)

8. Kimchi Fried Cauliflower Rice: When you’re craving the combo of spicy kimchi with warm rice and veggies, this will be your go-to. Kimchi is fermented, so it’s loaded with healthy, gut-loving probiotics. Even better, the tangy flavor adds a zing to everything it comes into contact with. This flavorful dish is light, but it really hits the spot. (via In Sonnet’s Kitchen)

9. Cauliflower Rice Fish Taco Bowls: This colorful and delicious fish, paired with avocado and mango, is ridiculously easy to make. Just leave off the yogurt sauce to make it Paleo-compliant. The cauliflower rice is exactly the right accompaniment; feast your eyes and your taste buds! One bite and you’ll feel transported to a tropical island. (via Julie’s Eats & Treats)

10. Tandoori Chicken & Curry Pineapple Cauliflower Rice: This complexly layered dish is so delicious, it will tempt Paleo and non-Paleo guests alike. The oven-roasted cauliflower rice is spicy-sweet thanks to pineapple chunks, curry and coconut oil. Almonds and raisins add just the right chewy crunch too. But the star of the show is the chicken. It’s spiced just right, and *so* tender that it falls right off the bone. (via Well Fed)

11. Easy Roasted Cauliflower: This dish is so basic that you rarely see a recipe for it, but it’s a must-have in your Paleo-cooking repertoire. Any time you’re in need of a quick side dish, grab a head of cauliflower, slather it in a mixture of olive oil and ghee, season with salt and pepper to taste and bake it in a cast-iron skillet until it’s golden brown. You won’t believe the complex caramelized flavor that emerges. Even kids will happily gobble it down. (via Kara Carrero)

12. Coconut Curried Cauliflower Soup: If you love Thai curries, you’ll love this soup. Paleo and vegan, it’s super creamy but dairy-free. You can adjust the heat by using more or less Thai chili paste. (via The Endless Meal)

Are you drooling over these Paleo cauliflower recipes? There’s more where that came from. Follow us on Pinterest.

Sally Jones
Sally Jones is a writer and editor living in New York City. She has worked at many websites including iVillage, Ladies Home Journal, More, Parenting, Cosmopolitan, The Knot and YourTango, in jobs ranging from editor to COO. Renovation and interior design are her unhealthy obsessions hobbies. She has renovated every home she's lived in, including the rentals, and like... whoa, who does that? You can catch her at her blog Renov8or.
Paleo
Healthy Eating
Paleo
The Conversation
More From Healthy Eating